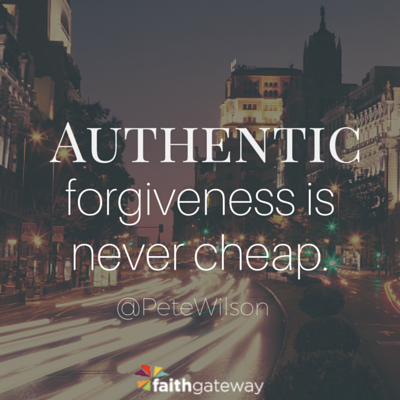 Have you ever had someone you count on make a promise and then break it? How about a close friend who takes a deep secret that you shared in confidence and tells somebody else? Maybe you had someone who was entrusted to care for you but instead hurt you in one of the deepest ways imaginable by abusing you physically or sexually? A business partner gains your trust and then exploits it? How about an ex-spouse who took the love you had for one another and ruined it by cheating on you?

If you live long enough, chances are you’ll be hurt or betrayed by someone.

Betrayal is always a violation of trust and a breaking of a promise. It comes at the hand of a friend, spouse, coworker, or boss. And like a sucker punch, it always comes as a shock.

The crippling reality is that if we don’t do something with that hurt or betrayal, it will assault us every time it comes to our mind. It will keep us prisoner of our past because that hurt will impact everything we touch.

Some of you have somehow convinced yourself that you can manage the hurt from your past without offering forgiveness. In fact, maybe you even tell yourself that you can hardly remember the pain. But unfortunately, the pains we dare not remember are often the most dangerous pains of all. We fear these particular hurts so much that we stuff them deep into our heart and past. But they always come back. Usually disguised, but they always come back.

Bitterness contaminates everything. It doesn’t isolate to the source of bitterness; it spreads to all of your relationships. And left unchecked, it will ruin everything that is important to you.

Sometimes you don’t forgive someone for their sake; you do it for your own freedom.

I met Gerry and his wife, Brenda, several years ago at church. Gerry is quite a bit older than I am, but there was a certain kind of peace this man radiated that made me want to get to know him better.

I took them to lunch one day to hear their story and hung on to his every word over the next hour and a half. Gerry and Brenda had a baby girl and named her Annie, which meant “blessed by grace.” You can imagine how heartbroken they were when during Annie’s freshman year of college, her life began to unravel. Annie dropped out of college and was living with some friends over two hundred miles away from home. Eventually Gerry and Brenda discovered that their daughter’s problems were being fueled by a heavy drug addiction.

During her freshman year of college, Annie had gotten mixed up with the wrong group of people, mainly, a guy named Kyle. He introduced her to drugs, and the rest was downhill from there. She lived with Kyle in a drug-induced stupor for the next two years. There were weeks they would disappear and nobody would know where they were or hear from them. Brenda and Gerry spent many nights crying and praying, fearing that she was dead in some heroin house.

As Gerry recalled, “I blamed this guy. I had tried several times to drive up to Indiana to get her, to rescue her, but she would never come with me. I was convinced that Kyle was manipulating her. I was convinced that if it wasn’t for him my daughter would not be doing drugs and not be in the shape she was. For the first time in my life, I allowed my hatred to take me to a dark place.

I began daydreaming about how I could kill Kyle. I thought about how I would do it and how I would cover it up. I convinced myself it was the only thing I could do to get my daughter back. I planted a seed of hate in my heart that night, and the root of bitterness began to grow. It was fertilized daily by my thoughts of getting rid of Kyle.”

Hate is our natural response to any deep and unfair pain. It’s an instinctive backlash against anyone who wounds us wrongly. Nobody wants to admit they hate someone, because it makes us feel cruel and malicious.

Hate makes you want to see them hurt in the same way they made you hurt. It makes you dream about evening the score. As Gerry was telling me his story, it never once crossed my mind that his anger, his vengeance, his hate, was unjustified.

Here’s the truth about forgiveness, though: authentic forgiveness is never cheap.

The only way we’ll be able to forgive others when they wrong us is understanding that when we sin against God, when we run as far away from Him as we can, when we return, He receives us. When we get that, when that moves from our head to our heart, we understand that we can’t do anything but forgive people when they wrong us. We can’t help but begin to let go of the hate that has us barricaded in the past.

I’m not saying it becomes easy, but when you understand how you have wronged God and that you have been a messed-up person who has only sinned against Him your entire life and yet He’s received you through the death of His Son, you are compelled to forgive other people. My understanding of God’s forgiving me despite me enables me to forgive others despite others. And while this act of forgiveness may not erase your past hurt, it does erase the power it has over you. It all allows your past to truly become just that — your past.

Sometimes it takes so long you actually can’t remember the moment you did it. You just kind of wake up one day, and when you think of that person, you’re surprised to discover that you don’t hate them near as much. You realize you’ve actually started to forgive them without even consciously making a decision to. After about two years Annie, whom Gerry thought he would never have a relationship with again, moved back home. The abusive relationship she had with Kyle was finally over. But even though he had his daughter back, his hatred for Kyle continued to rage.

At our lunch, Gerry said,

Pete, one day I woke up and knew I had to let this anger go. It was damaging my ability to love anyone. I had become a bitter, wound-up, short-tempered man, because my vengeance was slowly poisoning me. It took me a while, but day by day I began to let the hurt go. I continually reflected on the love and forgiveness of Jesus and asked God to fill me with what he had already extended to me.

Gerry continued, “I asked my daughter if Kyle still worked at the same plant he had for years. She assured me that as far as she knew he was. So that morning, not able to take it anymore, I started the four-hour drive.”

When Gerry reached Kyle (he said), “I’m here to say that I’m sorry. I’ve held a lot of anger toward you over the years for what I felt you had done to Annie and I want you to know I’m sorry.”

As Gerry stood there in the lobby of this plant embracing Kyle, he felt a peace come over him that he hadn’t felt in years. “The last time I was driving this direction on this road, I was contemplating killing a man because I was filled with so much rage and hate toward him. This time I was beginning to be filled with love toward the same man, whom I had just finished embracing. Never forget how powerful of a miracle forgiveness is.”

In recent years I’ve spent a lot of time with people who desperately want to experience the healing that comes along with forgiving someone. And with each one of them, generally there is one of three hurdles that seem to stand in the way of forgiveness.

The first hurdle is the idea that forgiving is the same as condoning. Forgiving does not mean that you decide you will tolerate injustice. Injustice needs to be fought at every turn.

Forgiveness is the opposite of excusing.

The fact that forgiveness is needed and granted indicates that what someone did was wrong and inexcusable. Because forgiveness deals honestly with sin, it brings a freedom that no amount of excusing or condoning could ever hope to provide.

The second hurdle is the idea that forgiving means you always reconcile with the other person. Sometimes you cannot reconcile.

If it is possible, as far as it depends on you, live at peace with everyone. — Romans 12:18

If the other person is not willing to acknowledge their part, if they are not willing to confess and repent when they have wronged you, then you cannot reconcile.

The third hurdle is that people often confuse forgiveness and forgetting. We need to forgive precisely because we have not forgotten what someone did. When we forgive, we must draw on God’s grace and consciously decide not to think or talk about what others have done to hurt us.

Forgiving someone means knowing full well that the offense was inappropriate, improper, or out-and-out wrong — and then deciding to relinquish your feelings of being entitled to make the guilty person pay.

To forgive someone is to let go of your desire to see them hurt. You let it go.

This is where we’re learning to trust God, because we start with this vertical transaction. In an act of trust, we hand over the responsibility of what to do next to God. We fully acknowledge the wrong done to us, and we place both the act and the consequences into His hands.

And when someone hurts us, Jesus stands with us. He stands in us. His word to us is that He hopes we’ll forgive this person, this offense in the same way He forgave us. That we’ll trust Him to heal us, restore us, and free us from the hurt.

And be kind to one another, tenderhearted, forgiving one another, even as God in Christ forgave you. — Ephesians 4:32 (NKJV)

Watch the Let Hope In Video

Excerpted with permission from Let Hope In by Pete Wilson, copyright Thomas Nelson.

Are you carrying a burden of unforgiveness? Are you ready to lay it down? We would love to hear your response to today’s devotional on our blog! ~ Devotionals Daily