Go Small for God: The Little Things Are Big Read this exclusive excerpt from Go Small: Because God Doesn’t Care About Your Status, Size or Success by Craig Gross and keep scrolling to learn how you can enter for a chance to win the smallest car in the U.S. with your book purchase! 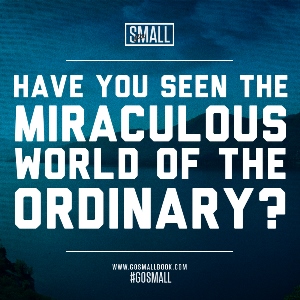 It is in the seemingly ordinary moments of life where God does his greatest work.

Go big or go home . . . so they say. But do you ever feel like no matter how big you go, you still haven’t gone big enough? Have you grown so frustrated with the pursuit of “go big” that “go home” is starting to look inviting?

Going big all the time is not only a recipe for burnout—it’s not the way God works in your life. It’s time to break free from “go big or go home.” It’s time to invest in stamina, to cultivate endurance, to recognize the miraculous world of the ordinary, little things.

Show the door to “go big or go home” thinking. Your ordinary life is miraculous. It’s time to go small—and keep on going.

I grew up in California, where you pretty much have to drive wherever you want to go, and since I still live here, I don’t know a whole lot about mass transportation in more compact cities like New York City, Boston, or Chicago. But I do know about a man named Clive Jacobsen, and I also know a little bit about how he uses his time on a train that runs from his house in Sydney, Australia, to a town called Shellharbour.

Every Sunday, Clive Jacobsen gets on the train with a leather duffel bag, finds a comfortable seat, and settles in for the four-hour journey. He isn’t going to pass the time looking at the scenery out the window, though. Nor will he strike up any conversations with his fellow passengers, read the latest paperback thriller, or scroll through his Twitter feed on a smartphone.

Clive Jacobsen will unzip his duffel bag, get out a notepad and a pen, and start writing letters. The letters he writes will eventually find their way to distant countries like Zambia, South Africa, or Thailand. Clive Jacobsen is writing to international prisoners.

He writes to inmates because he was one once. Long ago. Back in the mid-1960s, Clive Jacobsen spent a small amount of time in jail for a relatively minor offense, but he’s never forgotten the sense of isolation and abandonment he felt while he was there. So it seemed only natural that when a letter-writing organization contacted him in 2002 about sending letters to inmates abroad, he seized the opportunity right away. The organization told him he could write to more than one inmate if he liked, so he decided to write to three. As his correspondence went on and he began to develop relationships—however distant—with these men, he began to not only see the massive need for this type of pen pal, but also find some personal fulfillment through it.

So he upped it to four. Then ten. Then twenty. Then a hundred.

That is a lot of time on the train.

According to Clive, he can spend as much as $200 every month on postage alone, in addition to all the other supplies he uses to organize his correspondence.

This guy is an amazing example for all of us, because he’s just doing what God put in front of him. He saw an opportunity to reach out to some of the most marginalized and isolated people in the world and shine a light on them to let them know that no matter what they’ve done, Jesus still loves them and somebody sees them.

As far as the people Clive writes to, many of them were caught for minor offenses like stealing food, and a majority of the letters he writes are to men who were attempting to help their families in some way. They live in countries with extreme poverty and no opportunities to get out of it; and many of them, in a fit of desperation, did something criminal in an effort to take care of their kids or wife.

They land in prison and are sentenced to lengthy stays, and their families—the very people they were trying to help—abandon them.

Clive Jacobsen understands this about them, and his heart goes out to them. In his words, “They can’t undo the crime they’ve done . . . but no one is beyond redemption.”

And if you think what Clive Jacobsen is doing does nothing for him, then I would suggest you haven’t thought through this very much. I would imagine that something as small and simple as writing letters to these inmates helps Clive Jacobsen understand his own need for redemption—and reinforces to him how much Jesus has done for him.

He isn’t trying to change the world. He’s just trying to bring a little peace into these men’s lives, and in so doing, he brings some peace into his own.

And he does it by thinking small.

Celebrate the Launch of Go Small and Enter for a Chance to Win the Smallest Car in the U.S!

Watch the video to learn more and visit the book’s website after purchasing Go Small to enter for a chance to win the smallest call in the U.S.

When you purchase a copy of Go Small by Craig Gross between now and September 15th, 2014, you can upload your receipt to enter for a chance to win the smallest car in the U.S. Craig Gross wrote this book about going small so he figured we would do something really small to market and promote the book.

“We have no marketing budget and no promotions we just have the smallest car in the U.S. You buy the book and you earn a chance to win the car.” –Craig Gross

Purchase Go Small from FaithGateway and upload your book purchase receipt to enter for a chance to win the car.

Have you ever wanted to step out in faith for God and thought to yourself, that idea is too small, too ordinary to make a difference? Or do you have an example of something small that you did — something that you originally thought was just minor and insignificant — that eventually led someone or even groups of people to the Gospel? Join the conversation and leave your comments today on our blog. We’d love to hear from you!