It All Began with a Letter On a frosty February morning in 1941, as England began another year of fighting in the war against Germany, C. S. Lewis turned to the stack of mail on his desk and noticed a letter from a correspondent whose name was unfamiliar to him.

“Dear Mr. Lewis,” the writer began, “I address you by name because, although we have never met, you cannot be a stranger after allowing me — and many others — to know some of your thoughts and convictions in your book The Problem of Pain.”

The letter was from James Welch, the Director of Religious Broadcasting for the BBC. What no one at the time could have guessed — not Welch, Lewis, or anyone else — was that this letter would usher in a major turning point in Christian apologetics and would be the pivot around which Lewis’s tremendous Christian output would swing.

For the previous fifteen years of his life, Lewis had been a fellow at Oxford’s Magdalen College. At this point, he had published two very early books of poetry. Then, after becoming a Christian in 1931, he had published The Pilgrim’s Regress (1933), an allegory tracing his own journey to the Christian faith, and The Problem of Pain (1940), which explored the question of how a good and all-powerful God could create a world with evil and suffering. Adding to these, partly on the prompting of his good friend, J. R. R. Tolkien, Lewis had written a science fiction novel titled Out of the Silent Planet (1938), the story of a Cambridge linguist who was kidnapped and taken to Mars where he became caught up in interplanetary spiritual warfare.

While this output was significant, Welch’s use of the term many others in referring to the readers of The Problem of Pain was a relatively modest use of the phrase, referring to thousands of readers, not the millions that Lewis’s books would later have.

“I write to ask whether you would be willing to help us in our work of religious broadcasting,” Welch continued. “The microphone is a limiting, and rather irritating, instrument, but the quality of thinking and depth of conviction which I find in your book ought sure to be shared with a great many other people.”

Lewis wrote back to thank Welch for his kind remarks. Noting that the first topic about modern literature did not suit him, Lewis agreed to try his hand at the second. 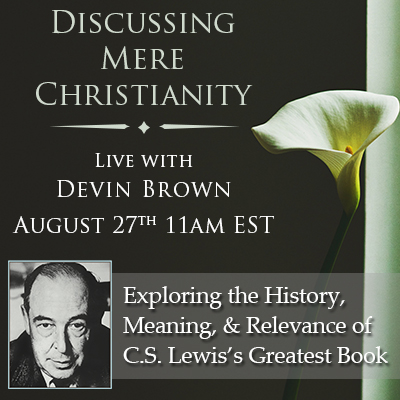 Register for the author chat on August 27 – Discussing Mere Christianity

Six months later — on Wednesday, August 6, 1941 — Lewis boarded the train for the hour-long trip from Oxford to London. He then traveled on to the BBC’s Broadcast House for the first in the series of five talks. Each week, at precisely 7:45 in the evening, the “On the Air” light would blink on, and Lewis would spend the next fifteen minutes speaking to a weary and war-torn nation about such topics as moral law and humanity’s relationship to one higher than itself.

To the surprise of everyone, including Lewis himself, the talks were a huge success. Lewis’s clear, step-by-step reasoning, his honest and unassuming tone, and his use of commonsense examples drew in listeners of all types. The BBC invited Lewis to present a second series of talks several months later, and then a third the following year, and finally a fourth series in 1944. The talks were originally published as separate works. Then, in 1952, they were collected into one volume and published as the book the world today knows as Mere Christianity. Many claim it is Lewis’s greatest book.

Today, Mere Christianity appears on virtually every list of the most influential Christian books of the twentieth century. A long list of new converts point to it as an indispensable element in their conversion. An equally long list of mature Christians cite it as having been an essential part of their Christian growth and discipleship.

And it all began with a letter.