What Jesus Says About Women: You Are Not "Less Than" At dawn one morning, Jesus went to the temple to teach. The people gathered round, ready to be taught — but the Pharisees rushed up, bringing a woman with them.

Teacher, this woman was caught in the act of adultery,” they said. — John 8:4

My heart catches at the thought of what this woman must have been feeling. Can you imagine her fear? And above all, her humiliation? Caught in the act, yanked from under the covers, dragged through the streets under the stares of her neighbors. Was she covering her face, crying, pleading, silent? We don’t know. But she had to be aware that there would be no erasing the damage now done to her reputation, that she would from this day forward be the subject of whispers and fodder for the town gossips. She had, after all, been caught in the act. She had violated the law.

We know nothing of what may have driven her to this. Was she a repeat offender? Had she been seduced, perhaps even pressured or forced, by an unscrupulous man? Did she give in, in a moment of weakness, to something that she thought might bring her some relief in a loveless marriage? The Bible doesn’t say. What led her to commit adultery is not the point of the story, but rather Jesus’ response to her when her shameful adultery was publicly exposed.

We cannot help but notice that only the woman was brought before Jesus. Isn’t someone conspicuously missing from the scene? Apparently, only the woman — not her lover — was considered enough of an offender to be brought to the temple for immediate judgment. For a woman, adultery was not just a cause of deep shame but also potentially a capital offense.

In the Law Moses commanded us to stone such women. Now what do You say? — John 8:5

The Bible doesn’t leave any doubt about what these men were attempting to do. This wasn’t a matter of wanting to adhere to the purest interpretation of justice according to the law. They were using this question as a trap, in order to have a basis for accusing Him (John 8:6). This woman was their bait. Would Jesus give a nod to stoning her, or disregard the law? Either way, they must have thought, we win.

Jesus didn’t take the bait. And notice how cleverly He distracted the attention of the crowd from the humiliated woman; He knelt and wrote on the ground with His finger. Imagine the crowd’s puzzlement as they watched Him. The Pharisees probably looked at each other, confused, and remained silent for a few moments to see whether He would speak. When He didn’t, they began assaulting Him with questions again, and eventually He stood and uttered the lines that have echoed through the minds of people of conscience ever since:

Let any one of you who is without sin be the first to throw a stone at her. — John 8:7

And He knelt and wrote on the ground again.

What was it that he was writing on the ground? A list of the sins of those who stood in judgment? The name of the missing man? It would be fascinating to find out, but that’s not what impresses me most about these verses. I find it a measure of Jesus’ mercy toward the woman that, once again, He draws all eyes away from her and toward Himself as He knelt.

I try to imagine myself in the woman’s place, dragged from the warmth of a bed with perhaps just time enough to snatch a garment or a blanket before being hauled through the streets to stand before Jesus and a hostile, glaring, condemning crowd, already hefting their stones. But for a few precious moments, she senses that no one is looking at her. All eyes are on Jesus. He has interceded for her already—and He hasn’t said anything to her yet. As He would one day soon on the cross, He has taken all her shame and humiliation on Himself and given her a respite.

As if this weren’t relief enough, what happened next must have astonished her even more. The crowd of people began to drift away—“the older ones first,” the Bible tells us (John 8:9).

Jesus didn’t stand until the crowd had dispersed. Then He turned to the woman and said,

Don’t you imagine it was with equal parts relief and amazement that she said, “No one, sir.”

Have you ever wondered how God reacts when you fall into sin? Then listen to these gentle words of Jesus and let them echo in your heart:

Then neither do I condemn you. Go now and leave your life of sin. — John 8:11

We don’t know whether any other women were present in the temple courts to witness this exchange, but even if not, surely there were women who witnessed the woman being dragged through the streets by the Pharisees. How grateful and appreciative they must have felt toward this man who actually protected her and showed compassion, as no other men—including, apparently, the man who’d been sleeping with her — were doing.

Watch the Video for Unashamed

Women Are Not “Less Than”

One could argue that the woman was brought for judgment because of her sin, but that would be only partly true. If justice had been the real goal, then the man would have been charged as well. No, this woman was guilty of the crime of being a woman caught in adultery.

If that sounds like an exaggeration, it wasn’t one by much in first-century Israel. Women in that culture were second-class citizens at best, akin to slaves. Men had complete authority over their wives and daughters and made all decisions regarding relationships and activities. The Mishnah, part of the Jewish Talmud, taught that women were like Gentile slaves and could be obtained by intercourse, money, or written contract. Women had few rights inside the home and practically none outside of it. They were not counted as members during a synagogue count, and received little or no religious education, except from their husband if he so desired. Men were discouraged from speaking to women on the street.

First-century Palestine — the world into which Jesus was born — was clearly a male-dominated society, but it certainly hasn’t been the only one. I can point out another one from personal experience: Greek culture. In the Greek family I was raised in, I felt that because I was neither the firstborn nor a son, I was somehow “less than.” “You’re only a woman,” I was told in so many ways — and it was crystal clear that this was not a good thing.

Nowhere in my experience has the denigration of women been clearer as in our work through A21 to rescue sex-trafficked women. In one court case, the accused was asked by the judge, “Why do you traffic women?”

The man shrugged. “They are easier to traffic than drugs and guns,” he said. “The penalty is not as harsh, and you can kick them like an animal, and they will do what you want them to do.”

Misogyny. It’s an ugly word — the hatred of women or girls. It comes to us through governments, cultures, religions, and nations. We’d like to think that it’s something that happens elsewhere, far away, or a long time ago. But no other word describes so precisely the attitude of the trafficker on trial that day, nor of the industry he represents. And it shows up in many other ways as well, from jokes — have you ever heard a blonde joke about a dumb blond man? — to pornography, to the difficulty a woman has getting equal pay for equal work, to the ease with which crimes against women are ignored or covered up.

Women are denigrated as often in modern society as they were in ancient cultures.

Two children are sold into the human sex trade every minute. Nearly two million children are forced into the worldwide sex trade every year.1 And 80 percent of all trafficking victims are women and girls.2 According to the United Nations, there are one hundred million women missing worldwide 3 — and five thousand girls are murdered around the world every year by their parents for acting in ways that shame their family.4

The history of our world — all periods of history, all continents, all cultural traditions — is rampant with damage, oppression, diminishment, contempt, and hostility aimed at women. Just think of the Salem witch trials, for example. Even today, women are stoned to death for adultery in India and Pakistan; they are raped and sold as slaves in Syria. And the men who perpetrate these horrendous acts are excused with religious theology. In every case, in every century, women have been targets. I see this same kind of evil played out in A21 court cases all the time. 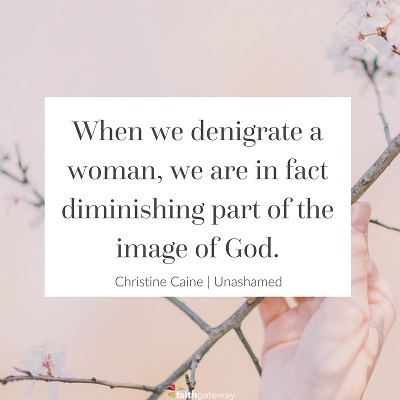 Of all places on earth, the Christian church could be the most significant place of healing and hope — the place where women experience the joys of being respected, appreciated, esteemed, included, and celebrated. After all, God Himself made women in His own image —

What a profound thought: God’s image is only fully reflected in both man and woman.

You knit me together in my mother’s womb.

God took just as much time and care knitting together every female child as He did every male child. Male and female are equally loved and valued by Him. Paul wrote to the Galatians stating this very point:

There is neither Jew nor Gentile, neither slave nor free, nor is there male and female, for you are all one in Christ Jesus. — Galatians 3:28, emphasis added

In Christ, there is no distinction in value between male and female.

No one dignifies, affirms, and celebrates women like the God of the Bible. Therefore, it should be the church that leads the way and sets the example of placing value upon womanhood… of getting them to Jesus, who can lift their shame and set them free.

Excerpted with permission from Unashamed: Drop The Baggage, Pick Up Your Freedom, Fulfill Your Destiny by Christine Caine, copyright Christine Caine. Published by Zondervan.

Women, do you feel “less than” in the world, in business, or in your family? What about at church and in your faith community? It wasn’t until I was in my 40’s that I realized how powerful Jesus’ behavior towards women is. Before that, I definitely felt “less than”. But, Jesus stayed in women’s homes (Mary and Martha), accepted their financial support (Joanna, Susanna; and many other women in Luke 8:3), treated them as valuable and equal, befriended them, and He accepted women as His followers unlike any known Rabbi of the day. No wonder women flocked to Jesus!

Men, How does Jesus’ value of women change you? Come share with us on our blog! We want to hear from you! ~ Laurie McClure, editor at FaithGateway