Marriage Myth: My Spouse Will Make Me Whole

by les and leslie parrott The old saying “opposites attract” is based on the phenomenon that many individuals are drawn to people who complement them — who are good at things that they are not, who complete them in some way.

The book of Proverbs says,

As iron sharpens iron, so one person sharpens another. — Proverbs 27:17

Our incompleteness and differences give iron its roughness, its sharpening power. Marriage is a God-given way to improve and hone our beings. Marriage challenges us to new heights and calls us to be the best person possible, but neither marriage nor our partner will magically make us whole.

This myth usually begins with the belief that successful couples are “meant to be” and “made for each other.” We have counseled numerous people who, having difficulties in their marriage, felt they had chosen the wrong person to marry. If only they had chosen “Mr. Right” or “Ms. Right,” everything would have worked out. C’mon! It’s ludicrous to believe that successful marriages depend on discovering the one person out of the more than six billion people on this earth who is just right for you. If you are single, the fact that there is no “one and only” does not mitigate careful screening of prospective spouses. But if you are married and are complaining because your marriage partner does not make you instantly “complete,” that doesn’t necessarily mean that you married the wrong person.

Couples who swallow the myth that their spouse will make them whole become dependent on their partner in a way that is by all standards unhealthy. These couples cultivate what experts call an enmeshed relationship, characterized by a general reliance on their spouse for continual support, assurance, and wholeness. It is usually coupled with low self-esteem and a sense of inferiority that is easily controlled by their partner.

Dependent partners desire happiness, not personal growth. They are not interested in nourishing the relationship but in being nourished by their partner. They believe the lie that says they will effortlessly be made whole simply by being married.

The opposite of an enmeshed marriage is a relationship of rugged self-reliance, often called the disengaged relationship. The term reflects the isolation and independence of spouses who are attempting to earn their sense of wholeness by relying on no one, even their marriage partner. These people, too, are trying in vain to compensate for their feelings of inferiority.

Your relationship can only be as healthy as the two of you. That’s why exploring your wellbeing as individuals, as well as the wellbeing of your relationship, is vital to helping you successfully launch an enduring love together. It’s one of the most important things you can do to “save your marriage before it starts.”

A sense of wholeness can never be achieved either in an enmeshed or in a disengaged relationship. Both are deeply flawed and dangerous. Instead, wholeness is found in an interdependent relationship, in which two people with self-respect and dignity make a commitment to nurture their own spiritual growth, as well as their partner’s.

These relationships are also known as:

are symbolized by the capital letter A. Partners have a strong couple identity but very little individual self-esteem. They think of themselves as a unit rather than as separate individuals. Like the long lines in the letter A, they lean on one another. The relationship is structured so that if one lets go, the other falls. And that is exactly what happens when one partner outgrows his or her dependency needs.

are structured like a capital H. Partners stand virtually alone, each self-sufficient and neither influenced much by the other. There is little or no couple identity and little emotional connection. If one lets go, the other hardly feels a thing.

rest on interdependence. Each partner has high self-esteem and is committed to helping the other partner grow. They could stand on their own, but they choose to be together. The relationship involves mutual influence and emotional support. M-frame relationships exhibit a meaningful couple identity. If one lets go, the other feels a loss but recovers balance.

Like separate strings of a lute that quiver with the same music, there is beauty in a marriage that respects the individuality of its partners. In an interdependent marriage, joy is doubled, and sorrow is cut in half.

A Final Word on Marital Myths

If you are discouraged by having held such fables as truth, take heart. Everyone enters marriage believing falsehoods to some degree. And every successful marriage patiently works to challenge and debunk these myths.

The bonds of matrimony are like any other bonds, they mature slowly. ~ Peter DeVries

Are You Getting the Love and Support You Need?

In biblical times, the special status of “bride and groom” lasted a full year.

If a man has recently married, he must not be sent to war or have any other duty laid on him. For one year he is to be free to stay at home and bring happiness to the wife he has married. — Deuteronomy 24:5

The beginning of marriage was a time of learning and adapting. It still is. So allow yourself the same luxury.

Excerpted with permission from Saving Your Marriage Before It Starts by Drs. Les & Leslie Parrott, copyright Zondervan.

Does that myth sound familiar to you? So many of us grew up believing (even without ever thinking about it) that our marriage partner would make us whole. Think of the romantic famous lines of popular films. For example: Jerry Maguire — “You complete me.” How much better to work towards an interdependent marriage where joy is doubled, and sorrow is cut in half! Come join the conversation on our blog. We’d love to hear from you about marriage myths and how to debunk them! 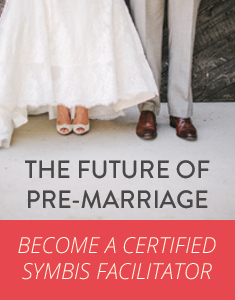