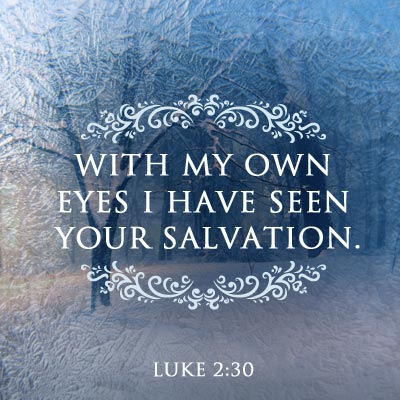 Now in Jerusalem there was a man named Simeon. He was an upright and devout man; he looked forward to Israel’s comforting and the Holy Spirit rested on him. — Luke 2:25

Let’s imagine a white-headed, wizened fellow working his way down the streets of Jerusalem. People in the market call his name, and he waves but doesn’t stop. Neighbors greet him and he returns the greeting but doesn’t pause. Friends chat on the corner and he smiles but doesn’t stop. He has a place to be and he hasn’t time to lose.

Simeon: the man who knew how to wait for the arrival of Christ. The way he waited for the first coming is a model for how we should wait for the Second Coming.

Simeon’s one incredible moment occurs eight days after the birth of Jesus. Joseph and Mary have brought their son to the temple. It’s the day of a sacrifice, the day of circumcision, the day of dedication. But for Simeon, it’s the day of celebration.

When Mary and Joseph brought the baby Jesus to the Temple to do what the law said they must do, Simeon took the baby in his arms and thanked God:

Verse 27 contains this curious statement: “Prompted by the Spirit he came to the Temple”. Simeon apparently had no plans to go to the temple. God, however, thought otherwise. We don’t know how the prompting came — a call from a neighbor, an invitation from his wife, a nudging within the heart — we don’t know. But somehow Simeon knew to clear his calendar and put away his golf clubs.

“I think I will go to church,” he announced. On this side of the event, we understand the prompting. Whether Simeon
understood or not, we don’t know. We do know, however, that this wasn’t the first time God tapped him on the shoulder. At least one other time in his life, he had received a message from God.

The Holy Spirit had revealed to him that he would not die until he had seen him — God’s anointed King. — Luke 2:26.

You’ve got to wonder what a message like that would do to a person. What does it do to you if you know you will someday see God? We know what it did to Simeon. He was “constantly expecting the Messiah” (Luke 2:25). He was “living in expectation of the salvation of Israel”. He “watched and waited for the Restoration of Israel”. Simeon is a man on tiptoe, wide-eyed and watching for the one who will come to save Israel…

The Greek language, rich as it is with terms, has a stable full of verbs that mean “to look.” One means to “look up,” another “look away;” one is used to “look upon” and another “looking in.” To “look at something intently” requires one word, and to “look over someone carefully” mandates another.

Of all the forms of look, the one that best captures what it means to “look for the coming” is the term used to describe the action of Simeon: prosdechomai. Dechomai meaning “to wait.” Pros meaning “forward.” Combine them and you have the graphic picture of one “waiting forwardly.” The grammar is poor, but the image is great. Simeon was waiting, not demanding, not hurrying; he was waiting.

But he was waiting with anticipation. Calmly expectant. Eyes open. Arms extended. Searching the crowd for the right face and hoping the face would appear today…

In the end, the prayer of Simeon was answered.

Pray: Lord, like Simeon, make me sensitive and aware of Your Holy Spirit’s promptings! Are you “waiting forwardly” for the Second Advent? Join the conversation on our blog! We would love to hear your thoughts about Simeon!