Having said these things, John continues, He spit on the ground and made mud with the saliva. Then He anointed the man’s eyes with the mud and said to him, ‘Go, wash in the pool of Siloam’ (which means Sent). So he went and washed and came back seeing. — John 9:6-7

In case you are wondering if this is some long-lost treatment for blindness, caking mud in a man’s eyes is not the normal protocol for healing a blind person.

The context and setting of this miracle brings additional understanding to this incredible account. John 7:11 to John 10:21 records events in chronological order. Jesus travels to Jerusalem in John 7 to celebrate the Feast of Booths. As He is performing miracles in the two chapters before healing the blind man, He is joined by thousands of people who were in Jerusalem to celebrate with the rest of their Israelite brothers and sisters. Why is this significant? Because the worst possible time to send a blind man to the pool of Siloam would have been in the midst of the festival. 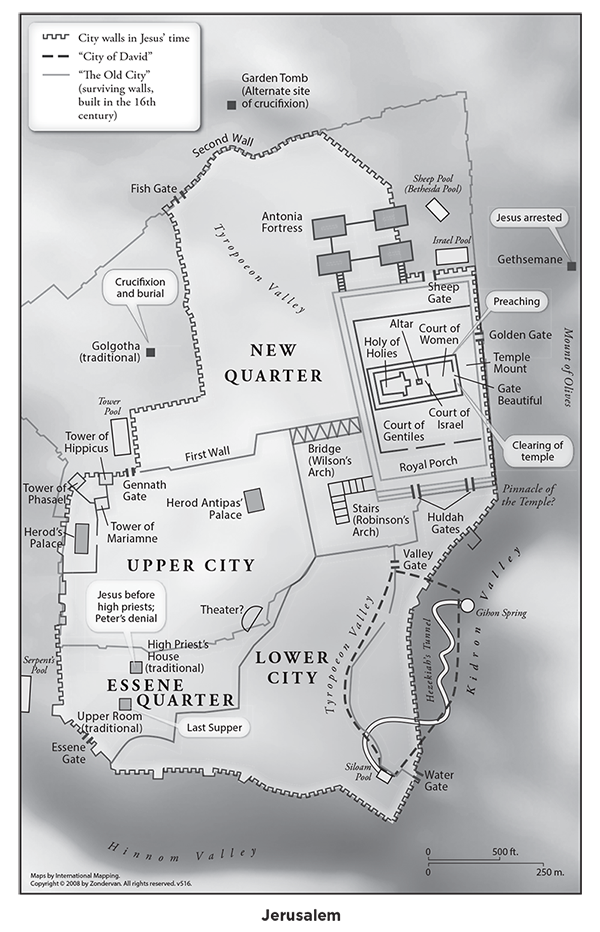 For one, the city was crawling with people, packed with worshipers. Add to this the fact that the journey was roughly half a mile through the main thoroughfare. A blind man would be bumping into people along the way while simultaneously traversing a steep hill descending to the pool. The man would have fallen numerous times, all while walking with his eyes caked in mud, looking like a scene from a horror film with the damp concoction dripping down his cheeks.

But Jesus purposely directed the blind man to the pool, even in the midst of the festival. He served as a walking billboard of His grace.

The Interrogation of the Man

Because so many people would have witnessed this miracle, it immediately caught the attention of the interrogating religious leaders, who were dumbfounded by the man’s healing. No one born blind had ever been healed before. The sages had reserved this miracle for the coming Messiah. Several messianic passages pointed to his coming and associated it with the healing of the blind:

The Lord sets the prisoners free; the Lord opens the eyes of the blind. The Lord lifts up those who are bowed down; the Lord loves the righteous. — Psalm 146:7-8, emphasis added

The wilderness and the dry land shall be glad; the desert shall rejoice and blossom like the crocus; it shall blossom abundantly and rejoice with joy and singing. The glory of Lebanon shall be given to it, the majesty of Carmel and Sharon. They shall see the glory of the Lord, the majesty of our God.

Strengthen the weak hands, and make firm the feeble knees. Say to those who have an anxious heart, “Be strong; fear not! Behold, your God will come with vengeance, with the recompense of God. He will come and save you.”

Then the eyes of the blind shall be opened, and the ears of the deaf unstopped; then shall the lame man leap like a deer, and the tongue of the mute sing for joy. — Isaiah 35:1-6, emphasis added

John didn’t want us to miss the importance of this particular miracle either, so he mentions the word “blind” thirteen times in this chapter. Five of those times he notes that the man was “blind from birth” (see John 9:1, John 9:2, John 9:19, John 9:20, and John 9:32). Jesus had clearly performed something that only the Messiah was believed able to perform.

In an attempt to downplay the significance of what Jesus had done, the Pharisees responded, “This man is not from God, for He does not keep the Sabbath.” But others said, “How can a man who is a sinner do such signs?” “Such signs,” as the others said, refer to the three miracles we have just examined: the messianic miracles. This put the Pharisees in a precarious spot. They were intent on believing that Jesus was not the Messiah and was, instead, a blasphemer — a false prophet. Since it would have been ludicrous to argue that Jesus hadn’t healed a blind man, they turned their interrogation to the one who was healed. They tried to prove that this man had not been born blind, but that he had acquired blindness sometime after birth. They turned to the man’s parents with questions, as John wrote:

The Jews did not believe that he had been blind and had received his sight until they called the parents of the man who had received his sight and asked them, “Is this your son, who you say was born blind? How then does he now see?” His parents answered, “We know that this is our son and that he was born blind. But how he now sees we do not know, nor do we know who opened his eyes. Ask him; he is of age. He will speak for himself.” (His parents said these things because they feared the Jews, for the Jews had already agreed that if anyone should confess Jesus to be Christ, he was to be put out of the synagogue.) Therefore his parents said, “He is of age; ask him.” — John 9:18-23

Having Eyes That Do Not See

The Pharisees had allowed their pride and pursuit of power to impede their understanding of the miracle and its implications. Where the man who was healed had been born physically blind, the Pharisees proved repeatedly that they were spiritually blind.

Jesus heard that they had cast him out, and having found him he said, “Do you believe in the Son of Man?” He answered, “And who is he, sir, that I may believe in him?” Jesus said to him, “You have seen him, and it is he who is speaking to you.” He said, “Lord, I believe,” and he worshiped him. Jesus said, “For judgment I came into this world, that those who do not see may see, and those who see may become blind.” Some of the Pharisees near him heard these things, and said to him, “Are we also blind?” Jesus said to them, “If you were blind, you would have no guilt; but now that you say, ‘We see,’ your guilt remains” (John 9:35-41).

The blind man was physically blind, but was able to see both physically and spiritually after the miracle. On the other hand, while the Pharisees could see physically, they were spiritually blinded by their own denial of the messianic claims of Jesus.

There is one last point I have always found a bit puzzling. The blind man’s answer to Jesus’s question strikes me as odd. After all, how could he not know who had healed him? But if we look back at his day, it makes sense. His day had begun like any other — he probably stood at the same spot to beg for money at the same time every single day. Because of its proximity to the temple and the influx of visitors for the Feast of Booths, his begging cup may have been fuller than usual, but other than that, it was a normal day.

Then, over the sound of the crowd outside, he may have heard Jesus preaching in the temple,

As long as I am in the world, I am the light of the world.

Shortly after hearing these words, a Man kneels beside him and spits in the dirt. Sounds of mud caked together in a ball penetrated his ears before feeling the moist mud pressed into his eye sockets. The silence is broken with the words,

Go wash in the pool of Siloam.

His heart is pounding as his blood pressure rises. Although he is unable to visualize the face, he recognizes that voice — the Man from the temple. This is the Nazarene’s voice. The blind man is presented with a choice. Will he trust and obey Him? Obeying this strange command would be laborious because of the thousands who had crowded the narrow streets of Jerusalem. But he takes a risk and embarks on the long journey down to the pool of Siloam without an escort. He repeatedly apologizes as the pilgrims he bumps into form a path for him to follow.

Upon arriving at the waters, he plunges his mud-covered face underneath. As the clay washes from his sockets, his darkness is pierced by a ray of hope. Penetrating eyes that had never until this point seen the light of day are now opened. When he emerges from the water, reality sets in. “I can see,” he says to himself. Then louder, “I can see.” Before long, the once blind man is yelling, “I CAN SEE! I was born blind, but now I CAN SEE!”

The account of the man born blind serves several purposes. It provides historical evidence that Jesus truly is the Messiah — but it does even more. Jesus was a Jewish rabbi who taught in pictures, not just in proofs.

The healing of the man born blind is proof of who Jesus is, but it is also a picture of our salvation.

This man was born into darkness, like the rest of mankind, but Jesus shined His light upon his darkened heart. Although he benefited from the miracle, it wasn’t intended only for him. The man was healed and became a walking billboard, a trophy of God’s grace. His pain would be the platform upon which he would preach the gospel. His suffering was the means by which God would draw others to Himself.

Aren’t you glad God does the same with us?

Excerpted with permission from The Forgotten Jesus by Robby Gallaty, copyright Robert Gallaty.

Watch the Trailer: The Forgotten Jesus

What a story (what a Gospel!) this formerly blind man had to share with the world for the rest of his life! What a story we have to share as well! Jesus saved us so that we would tell about His love and grace. Who are you telling today? Come share with us on our blog. We want to hear! ~ Devotionals Daily