Be sober, be vigilant; because your adversary the devil walks about like a roaring lion, seeking whom he may devour. — 1 Peter 5:8

Why is it important to understand the enemy?

Before you fight a war, it’s always a good thing to know something about your enemy. Nowhere is this statement truer than in the spiritual realm.

Many Christians do not take the enemy seriously because they don’t know enough about him to take him seriously.

In fact, Satan’s cleverest strategy is to make us believe that he does not exist or that he’s not a real threat.

Some Christians do not even believe in a literal devil. Instead, they believe he is a biblical symbol for evil. But that is not the position of the Bible. The devil is every bit as real as God is. It’s hard for a symbol to do the things attributed to Satan in Scripture: deceiving, murdering, tempting, destroying, lying, accusing, and controlling.

In the famous exchange between God and Satan in Job 1, God asked Satan from where he had come. The devil answered,

From going to and fro on the earth, and from walking back and forth on it. — Job 1:7

Satan is active on the earth today, involved in human affairs. In fact, the whole world is under his control (1 John 5:19). God has given Satan authority on the earth for a while, and God will one day take back that control. In the meantime, anyone living on planet Earth is subject to the devil’s actions. And we must keep our guard up against him.

In the book The Art of War, written twenty-six hundred years ago, author Sun Tzu observed:

Is it possible for Christians to become preoccupied with the study of Satan and his demons?

There are two extremes we should avoid. If you hold the position that you don’t want to know anything about this subject of the enemy and his forces and you aren’t going to study it, then you give Satan an advantage through your ignorance of him. On the other hand, if you think you need to know all there is to know about Satan and you read just about every word in print about him, then you will fail to focus on other important truths in Scripture that God wants you to study. Know your enemy, but don’t become preoccupied with Satan and his demons.

What do we know about Satan’s origin?

Satan’s original name was Lucifer, which means “shining one,” “morning star,” or “son of the morning.” And strange as it may sound, he came from Heaven. Lucifer was the chief of the cherubim — the highest order of angels. And before the fall, he was in Eden, the garden of God, and he had access to the throne of God (Ezekiel 28:13-14).

We also know that Lucifer was “full of wisdom and perfect in beauty” (Ezekiel 28:12). In fact, Ezekiel 28:13 describes the beauty of Lucifer with gems that reflected the glory of God: “sardius, topaz, and diamond, beryl, onyx, and jasper, sapphire, turquoise, and emerald with gold.” No creature had been so fully prepared to reflect the glory of God.

This same passage in Ezekiel also gives us a musical description:

The workmanship of your timbrels and pipes was prepared for you on the day you were created. — Ezekiel 28:13

God had given Satan the very special commission to minister unto Him and cover His glory with music through worship and praise. Of Lucifer’s musical abilities, Terry Law has written: “Pipes apparently were built into his very body… He was a master musician.”2 He was a walking orchestra. And that was the distinctive purpose that God gave him:

Lucifer was one of God’s best works, created to praise God in Heaven.

From the pomp and beauty of heaven, this glorious creation will be “brought down to Sheol, to the lowest depths of the Pit” (Isaiah 14:15). All his beauty will be gone. In the epic poem Paradise Lost by John Milton, we see this illustrated. There is a battle in heaven as Satan and his followers fight against God for supremacy. After being defeated and chained in a lake of fire, Satan is still not willing to accept defeat.

Satan would rather be a king in hell than a servant in Heaven.

In fact, so great is Satan’s arrogance that, even after being cast out of heaven, he has continued to work to subvert the plans of God by corrupting His most prized creation: mankind. Satan also attempts to make evil seem good as he enchants human beings with false gods. From the glories of heaven where he was created, Satan has fallen, and his ultimate destination for all eternity will be a pit.

What caused Lucifer to fall from Heaven?

Lucifer was perfect “till iniquity was found in [him]” (Ezekiel 28:15). Isaiah 14:13-14 tells us what happened in Lucifer’s heart when he rebelled against God:

You have said in your heart: “I will ascend into heaven, I will exalt my throne above the stars of God; I will also sit on the mount of the congregation on the farthest sides of the north; I will ascend above the heights of the clouds, I will be like the Most High.”

Lucifer’s heart was captivated by pride.

He decided it was no longer good enough to be an angel created in the beauty of God. Lucifer wanted to be like “the Most High.”

He desired God’s place in Heaven — God’s position, His power, His perfection, His privilege. And when Lucifer (day star) became Satan (adversary) due to this sin in his heart, he was banished from heaven (Ezekiel 28:16). His proud heart was the reason for his fall, and the Bible tells us he did indeed fall. Here are Jesus’ own words:

I saw Satan fall like lightning from Heaven. — Luke 10:18

The essential vice, the utmost evil, is Pride… It was through Pride that the devil became the devil. Pride leads to every other vice. It is the complete anti-God state of mind.3 ~ C. S. Lewis

How could a perfect, holy being fall?

Satan wasn’t created as the devil. God created Lucifer. Lucifer forfeited that name and became Satan (meaning “adversary” or “enemy”) of his own will. But how? Lucifer had no sinful world to lure him, no tempter to push him, and no innate sinful nature to overpower him. How could the first unholy affection arise in an angelic being? The answer lies in the fact that — like you and me — Lucifer was created with freedom to choose.

Each of us has the choice: the opportunity to say yes to God… or not. Lucifer chose to use his gift of free choice against the Giver. In his own heart, Lucifer pridefully determined that he would elevate and glorify himself. And that was the first sin ever committed in the universe — the sin of pride.

As a result of his anointed role in the heavens and his great beauty, Lucifer’s heart filled with pride, and God cast him out of Heaven (Ezekiel 28:17). To this day Satan remains arrogant, prideful, and rebellious against God (Isaiah 14:12-14). It is a warning to us as Christians that, since Satan’s personality is characterized by pride, he will tempt us by using the same weakness in ourselves.

It was pride that changed angels into devils; it is humility that makes men as angels. ~ Augustine

How does Satan attempt to deceive the world?

Spiritual deception may be Satan’s most insidious weapon in his guerrilla warfare against us. Jesus and the apostles speak of it nearly thirty times in the New Testament. John 8:44 records Jesus’ reply to a group of Jews who were resisting His message. Jesus boldly told them that they were children of their father the devil and that they were not hearing the truth because their father’s native language was lies. A person’s native language is what he or she converses in most easily. And Satan speaks the language of deception quite fluently.

In fact, Revelation 12:9 refers to Satan as the one “who deceives the whole world,” and he does so by imitating the work of God through counterfeit and camouflage. Satan’s last and greatest deception will be to bring the Antichrist to the world at the end of the age. Initially the Antichrist will be a peacemaker who uses persuasive speech and manifests supernatural powers much as Jesus Himself did. But once people fall for this counterfeit, the Antichrist will lead them not to God but away from Him.

Pastor and theologian R. Kent Hughes explains one of the reasons for Satan’s effectiveness as a deceiver and manipulator:

I am no genius at mathematics, but even with my limited capabilities I could be terrific at math if I worked at it for 100 years (maybe!). If I labored hard at it for 1,000 years and read all the learned theories, I would be a Newton or an Einstein. Or what if I had 10,000 years? Given that time, any of us could become the world’s greatest philosopher or psychologist or theologian or linguist… Satan has had multiple millennia to study and master the human disciplines, and when it comes to human subversion, he is the ultimate manipulator.4

The devil’s disguises are very clever, and he hides in the most unbelievable places. One of his favorite hideouts is religion. He also hides behind intellectualism. He hides in poetry and art and oftentimes in music. He hides in psychology and human understanding. Satan can even use the subtle method of Scripture taken out of context to deceive. When people take verses out of context and use them to prove something they were not intended to prove, those people are falling right into Satan’s trap.

Satan never tempts us to believe blatant error: that would be too easily discerned.

Satan is subtle, and that is why we as the people of God must stay alert.

Download the FREE printable of the Warrior’s Prayer by Dr. David Jeremiah. 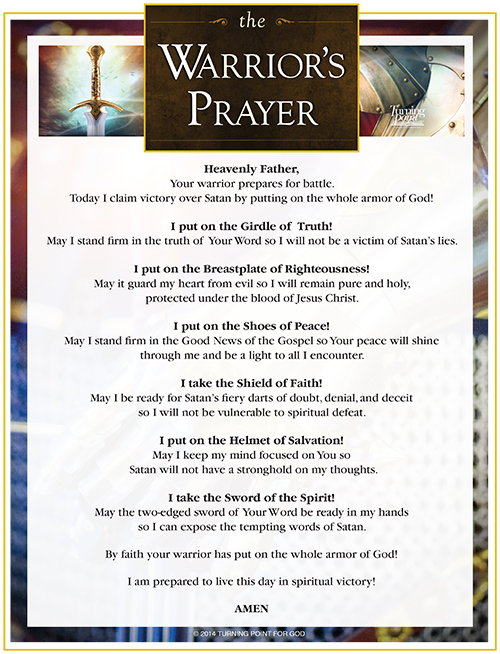 How often do you consider Satan and actively guard against and pray against him? Today, let’s pause and remind ourselves to be aware that we have an active enemy who “prowls about as a roaring lion seeking whom he may devour” (1 Peter 5:8) not in fear, but in preparation. Father, help us to stay alert and to keep our focus on You. Help us to root out pride in every form in our lives and to remain humble. Come share your thoughts with us on our blog. We want to hear from you! ~ Devotionals Daily