The Lord My Rock What better word than “rock” to represent God’s permanence, protection, and enduring faithfulness? When you pray to the Lord your Rock, you are praying to the God who can always be counted on. His purposes and plans remain firm throughout history. The New Testament identifies Jesus as the spiritual rock that accompanied the Israelites during their long journey through the desert. He is also the stone the builders rejected but that has become the cornerstone of God’s church.

Praise be to the Lord my Rock, who trains my hands for war, my fingers for battle. — Psalm 144:1

Praise be to the Lord my Rock, who trains my hands for war my fingers for battle.

He is my loving God and my fortress, my stronghold and my deliverer…

Reach down Your hand from on high; deliver me and rescue me

from the mighty waters, from the hands of foreigners

whose mouths are full of lies, whose right hands are deceitful.

I will sing a new song to You, O God; on the ten-stringed lyre I will make music to You,

to the One who gives victory to kings, who delivers His servant David from the deadly

Lord, You are more reliable than the ground I stand on and your faithfulness is more than I can comprehend. Thank You for hearing my voice and rescuing me when I cry to You. When I am shaken, You steady me. When I am in trouble, You save me. Amen. 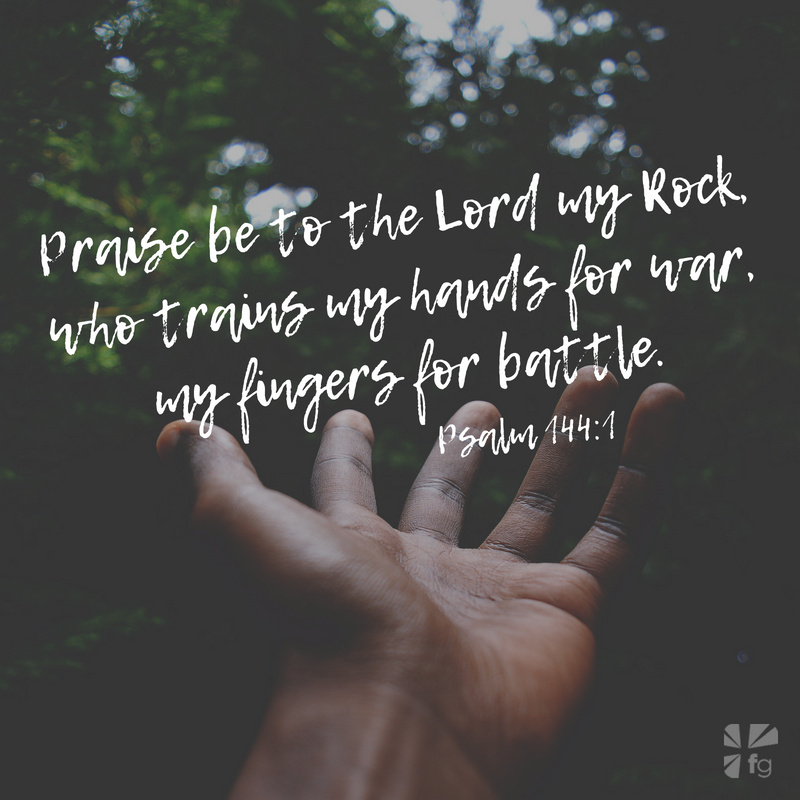 Rocks provided shade, shelter, and safety in the wilderness and were used to construct altars, temples, houses, and city walls. Heaps of stones were also used to commemorate important events in Israel’s history. God’s commandments, given to Moses, were etched on stone so that all generations would learn His law. The word “rock” epitomizes His enduring faithfulness. The Hebrew noun tsur is often translated “rock” or “stone,” while petra is the Greek word for rock. To worship Yahweh Tsuri (yah-WEH tsu-REE) is to echo Hannah’s great prayer of praise:

The Lord is my rock, my fortress and my deliverer, my God is my rock, in whom I take refuge, my shield and the horn of my salvation. He is my stronghold, my refuge and my savior — from violent men You save me. I call to the Lord, who is worthy of praise, and I am saved from my enemies. — 2 Samuel 22:2-4

Praise God: For being your rock.

Offer Thanks: For the way God has delivered you from enemies.

Confess: Any times in which you have retaliated against others.

Ask God: To give you the humility not to strike back when someone offends you.

After dropping my children at school one morning, I stopped at the grocery store to pick up a few things. On my way out of the parking lot a driver in another car beeped at me, mistakenly thinking he had the right of way. Being a good Christian, I turned the other cheek and let him pass, right? Of course not! I kept on going, heading straight out in front of him. Then he beeped again. Tired of ignoring his boorish behavior, I gave him a backward beep (since I was already in front of him), proceeded smugly into traffic, and began muttering to myself about the low I.Q. of the Neanderthal behind me.

You may remember that King Saul made himself David’s enemy by repeatedly trying to murder him. Surprisingly, though David defended himself, he refused to retaliate even when he had the perfect opportunity. One time Saul and his army were chasing David, when Saul entered a cave to relieve himself. He had no idea that David was hiding inside. Talk about a sitting duck! David could have set things straight in an instant and no one would have blamed him. But instead of killing Saul, David merely crept up behind him and sliced off a piece of his robe as evidence that he intended the king no harm.

Few of us have enemies with a big “E” as David did. Most of ours are the small “e” variety, like drivers who try to cut us off, teachers who dislike our children, insurance companies that refuse to pay claims, coworkers who speak ill of us. David had the grace to respond to his enemy with mercy because he knew that God himself would deal with Saul. He had no need to get even. No need to vindicate himself. No need to strike out. He believed that the promises God had made were as solid as the rock he stood on. And in the end, God took care of things, punishing Saul but not by David’s hand. When David finally became king, he took the throne without having Saul’s blood on his hands.

We, too, will have our battles, though they may not be as dramatic as David’s. Like him, we can respond with humility and trust, defending ourselves without giving in to our desire to retaliate, confident that the God whom David called his Rock — the One who is true to every promise — is the same God who is with us.

Excerpted with permission from Praying the Names of God by Ann Spangler, copyright Ann Spangler.

The names of God are His powerful attributes. “Rock” creates a tremendous picture of strength, endurance, and reliability. Steady as a rock. Strong as a rock. Firm as a rock. Our God can be depended upon because He is the beginning and the end! Come share your thoughts on God our Rock on our blog. We want to hear your prayers to Him!