Whatever You Grow Up to Be 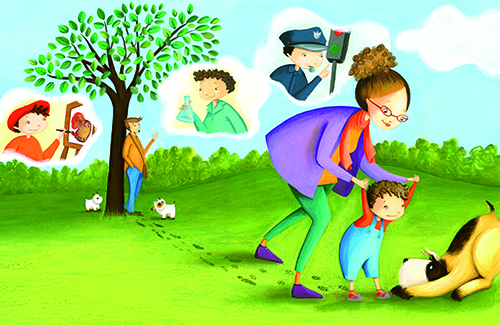 “What do you want to be when you grow up?”

That question can be one of the most intriguing questions to pose to a child. You never know what they are going to say. It can be anything from a doctor to a professional bubblegum blower. I used to think I would one day become a lawyer since I was a pretty good debater. However, as I grew up I also displayed other gifts and talents like singing, writing, and performing. Since these things were discovered in school or church, I thought I would become a gospel singer or write music. I often wonder what my parents thought I might be when I was little and if what I do now came close to their assumptions.

Looking at my children, I am sure their aspirations of who they want to be will also change as they get older and discover their passions and how they are naturally gifted. Honestly, it’s one of the wondrous perks about being a parent. There is nothing more exciting than to see your children find their place in this life.

Karen Kingsbury’s new book, Whatever You Grow Up to Be, is a touching story of a mother and her son as he grows up to discover the unlimited possibilities God has for his life, while never forgetting the special bond he shares with his mother. As I read this book, it brought me to tears, as it took me through the rollercoaster of thoughts every parent has while watching their children grow and learn. In one particular section, the mom in the story says, “Middle school and you’re thirteen; Cleats and jersey, crisp and clean.” I could see my boys in this illustration even though they’re just 6 and 10. They love football, and my oldest thinks he’s just one step away from joining the NFL.

My 6-year-old son came home the other day and told me that he wanted to be a race car driver when he grew up. My 12-year-old daughter has dreams of being on the stage. She just scored her first audition in middle school theatre as an Oompa Loompa in Charlie and The Chocolate Factory. Our baby girl says she wants to be a princess when she grows up, although I told her she is already a princess and needs to consider a new profession. My oldest son says that he likes math and facts and wants to go to college to become an engineer after he was done playing in the NFL. I guess I can at least be happy that he knows football doesn’t last forever. He also said he plans to have 19 kids and counting. God bless his future wife!

I love the reference Karen Kingsbury makes in Whatever You Grow Up to Be about being a grandparent. It helped me understand the joy my mom often speaks about when she is around my children. As your children become adults, you’ll hopefully be able to see this process repeated in them when they establish their families. This book encouraged me to support my children in who they were, rather than what I am grooming them to be. Of course I’ll have my own dreams, but those dreams will always be just that, especially when waiting to see what God has in store!

What did you want to be when you grew up and did you actually achieve it? What are some of the dreams you have for your own children?