What is the best way, as a Christian, to engage with a gay friend or family member? Well, it’s not easy. But as someone who’s been on both sides of this issue, my perspective is fairly unique.

On Sunday, September 20, 2009, I walked into an evangelical church in Hollywood called Reality LA as a self-proclaimed atheist and a gay man; two hours later I walked out a born-again Christian who no longer identified as gay. The power of the gospel utterly transformed me during that service. I now live as a single, celibate man. I am happy to deny myself and take up my cross and follow Jesus, because He’s infinitely worth it!

Let’s start by asking the obvious question: What would Jesus do with regards to those in the LGBT community? Would He distance himself from them? Would He refuse to interact with them? Would He look at them as a lost cause and move on? Would He protest gay pride parades? Would He hold up signs with condemning slogans scrawled across them? Would He reject them?

In the Synoptic Gospels, we see Jesus dining with “sinners and tax collectors.” This was incredibly counter-cultural. Instead of acting like the religious folks of His day, He deigned to dine with “those people.” This unexpected action mortified and mystified the religious class. They were downright indignant. In His typical fashion, Jesus schools them:

Jesus focused on individuals, not groups (the story of the Samaritan woman at the well, for example). He was after people’s hearts, hence His deeply personal approach to those whom He encountered.

Unless you repent, you will all likewise perish. — Luke 13:3

But Jesus was the master of balancing grace with truth. He does this perfectly throughout the Gospels.

My sister-in-law, Kim, was a natural at this. For me, she was a great example of how a Christian should respond to this issue. She has been a strong believer since early in her childhood. I met her when I was in high school, and she started dating my older brother, Greg. She and I always had a special bond; we enjoyed chatting and hanging out with each other. Years later, after I came out as gay to my whole family, my relationship with Kim remained the same, even though she was what I would have called a Bible-thumping, evangelical Christian. I knew that she knew that I knew that she believed homosexuality was a sin, but I never felt an ounce of condemnation from her. She never sat me down to explain to me that I was sinning. She never quoted Bible verses to me. She never judged me for my lifestyle. Instead, she did something far more dangerous: she prayed… for twenty years!

Over the years, while living in Los Angeles, I would go back to Dallas (my hometown) for Christmas. One of the highlights of my visits was getting together with Kim at the nearest coffee shop. We would chat for hours. I would talk about guys; she would talk about God. She was genuinely interested in my life, and never once said to me, “You know, you’re still sinning.” She was very open about her faith and would talk about what God was doing in her life. But this didn’t bother me, because I sensed an unconditional love from her. Her love for me didn’t increase or decrease based on whether or not I was in a relationship with a guy at that particular moment. In other words, she didn’t withhold love from me because of the way I lived my life.

She did two key things throughout the years: she loved me unconditionally and prayed for me without ceasing. That’s it. And it worked!

I was recently invited to a small dinner party at an incredibly beautiful home in Malibu. A friend from church was a work colleague with the owner, who was a gay man. Much to my friend’s and my surprise, the owner wanted to hear more about Christianity. He was curious as to why two gay guys would give up that life to follow Christ. Of course, we were more than happy to have this opportunity to share the Gospel with this group of relatively hardened skeptics, both gay and straight. The only problem was that our gracious host had failed to mention to his friends that two evangelical Christians, who had both been saved out of the homosexual life, were the guests of honor!

When, immediately after the first course was served, our host turned to me and asked if I would share my story with everyone at the table, I almost choked on my fennel salad. But as I was detailing the story of my conversion, I saw a look of genuine interest on the faces of the listeners; that is, until one of them asked the $64,000 question: “What about your sexuality?” As I addressed that issue, there was a sudden shift in the room. The mood quickly changed from polite interest to semi-hostile disgust. I tried my best to explain why homosexual behavior was incompatible with Christianity, when suddenly the discussion at the table became very animated. Various guests were chiming in with their own views, not only on this incendiary subject but on “spirituality” in general. After our second course, the conversation started to become heated. So much so that at one point, when I felt like it was getting out of hand, I stopped everyone and said: “Guys, guys. I just want you all to know that the only reason I drove an hour out to Malibu on a school night during midterms (I was in seminary at the time) is because I love you! That’s it. I’m not here to win an argument. I’m here because I love you. Period.” Everyone was taken aback by this unexpected expression of my motives. A few of them seemed dumbstruck. The temperature in the room instantly dropped, bonhomie was quickly restored, and the evening ended on a good note. We didn’t experience a mass conversion that evening, but I was thankful for the opportunity to share what God has done in my life. Seeds were planted.

According to Jesus, the second greatest commandment is to love our neighbor as ourselves.

We know what happened when the lawyer was foolish enough to put Jesus to the test by asking who his neighbor was. After telling the Parable of the Good Samaritan, Jesus asks the lawyer which man in the parable proved to be a neighbor to the man who fell among robbers. The lawyer responds,

The one who showed him mercy.

Let us also do likewise. Get a coffee or share a meal with a gay family member or friend. Love him or her without condemning. This could make all the difference in the world. I think Billy Graham put it best when he famously said, “It is the Holy Spirit’s job to convict, God’s job to judge, and my job to love.”

Written for Devotionals Daily by Becket Cook, author of A Change in Affection.

As believers in Jesus, we are called to love. Plain and simple. God’s in charge of convicting and changing others, not us. Who needs your love today? Who can you impact for the Kingdom of God just by loving them unconditionally right where they are… and praying for them? Come share with us on our blog! We want to hear from you! ~ Devotionals Daily

Hear more about the book from author Becket Cook. 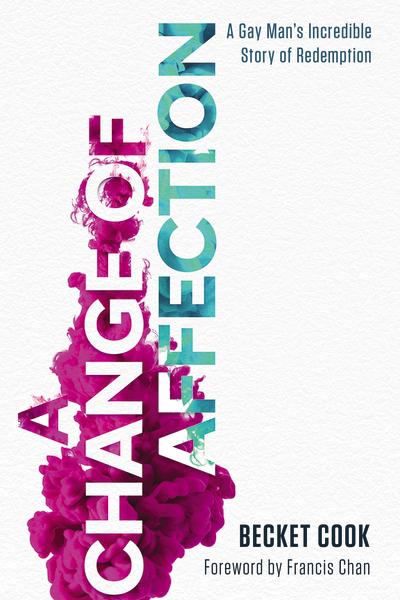 Buy Now from the FaithGateway Store