You'll Get Through This She had a tremble to her, the inner tremble you could feel with just a hand on her shoulder. I saw her in a grocery store. Had not seen her in some months. I asked about her kids and husband, and when I did, her eyes watered, her chin quivered, and the story spilled out. He’d left her. After twenty years of marriage, three kids, and a dozen moves, gone. Traded her in for a younger model. She did her best to maintain her composure but couldn’t. The grocery store produce section became a sanctuary of sorts. Right there between the tomatoes and the heads of lettuce, she wept. We prayed. Then I said, “You’ll get through this. It won’t be painless. It won’t be quick. But God will use this mess for good. In the meantime don’t be foolish or naive. But don’t despair either. With God’s help you will get through this.”

Audacious of me, right? How dare I say such words? Where did I get the nerve to speak such a promise into tragedy? In a pit, actually. A deep, dark pit. So steep, the boy could not climb out. Had he been able to, his brothers would have shoved him back down. They were the ones who had thrown him in.

So it came to pass, when Joseph had come to his brothers, that they stripped Joseph of his tunic, the tunic of many colors that was on him. Then they took him and cast him into a pit. And the pit was empty; there was no water in it. And they sat down to eat a meal. — Genesis 37:23-25

Twenty-two years later, when a famine had tamed their swagger and guilt had dampened their pride, they would confess,

We saw the anguish of his soul when he pleaded with us, and we would not hear. — Genesis 42:21

These are the great-grandsons of Abraham. The sons of Jacob. Couriers of God’s covenant to a galaxy of people. Tribes will bear their banners. The name of Jesus Christ will appear on their family tree. They are the Scriptures’ equivalent of royalty. Yet on this day they were the Bronze Age version of a dysfunctional family. They could have had their own reality TV show. In the shadow of a sycamore, in earshot of Joseph’s appeals, they chewed on venison and passed the wineskin. Cruel and oafish. Hearts as hard as the Canaanite desert. Lunch mattered more than their brother. They despised the boy.

Here’s why. Their father pampered Joseph like a prized calf. Jacob had two wives, Leah and Rachel, but one love, Rachel. When Rachel died, Jacob kept her memory alive by fawning over their first son. The brothers worked all day. Joseph played all day. They wore clothes from a secondhand store. Jacob gave Joseph a hand-stitched, multi-colored cloak with embroidered sleeves. They slept in the bunkhouse. He had a queen-sized bed in his own room. While they ran the family herd, Joseph, Daddy’s little darling, stayed home. Jacob treated the eleventh-born like a firstborn. The brothers spat at the sight of Joseph. 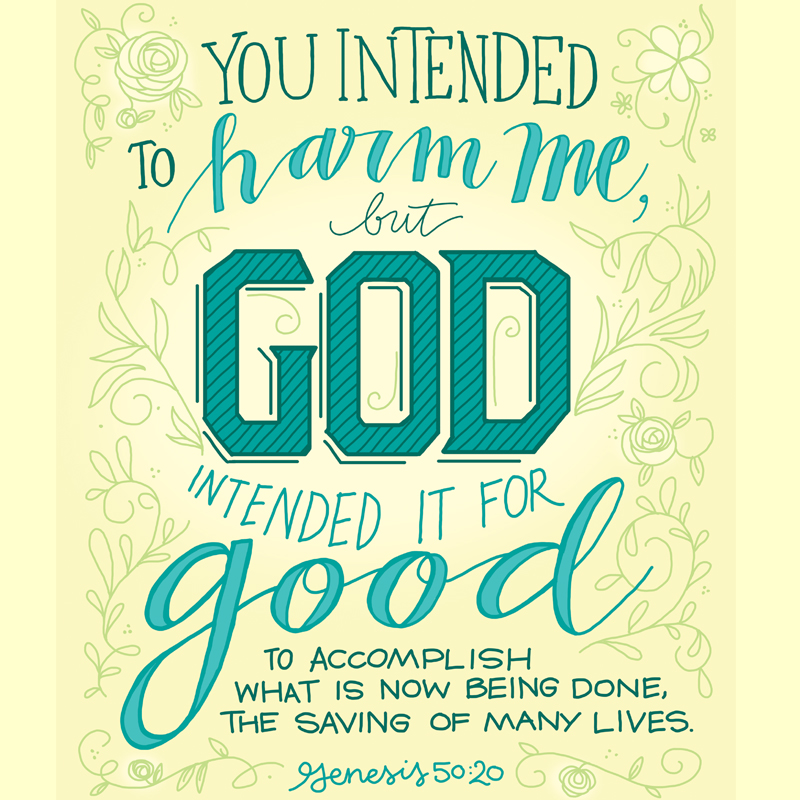 To say the family was in crisis would be like saying a grass hut might be unstable in a hurricane.

The brothers caught Joseph far from home, sixty miles away from Daddy’s protection, and went nuclear on him.

They stripped Joseph of his tunic… they took him and cast him into a pit. — Genesis 37:23–24 (emphasis mine)

Defiant verbs. They wanted not only to kill Joseph but also hide his body. This was a murderous cover-up from the get-go.

Joseph didn’t see this assault coming. The attack caught him off guard.

So did yours. Joseph’s pit came in the form of a cistern. Maybe yours came in the form of a diagnosis, a foster home, or a traumatic injury. Joseph was thrown in a hole and despised. And you? Thrown in an unemployment line and forgotten. Thrown into a divorce and abandoned, into a bed and abused. The pit. A kind of death, waterless and austere. Some people never recover. Life is reduced to one quest: get out and never be hurt again. Not simply done. Pits have no easy exits.

Joseph’s story got worse before it got better. Abandonment led to enslavement, then entrapment, and finally imprisonment. He was sucker punched. Sold out. Mistreated. People made promises only to break them, offered gifts only to take them back. If hurt were a swampland, then Joseph was sentenced to a life of hard labor in the Everglades.

Yet he never gave up. Bitterness never staked its claim. Anger never metastasized into hatred. His heart never hardened; his resolve never vanished. He not only survived; he thrived. He ascended like a helium balloon. An Egyptian official promoted him to chief servant. The prison warden placed him over the inmates. And Pharaoh, the highest ruler on the planet, shoulder-tapped Joseph to serve as his prime minister. By the end of his life, Joseph was the second most powerful man of his generation. It is not hyperbole to state that he saved the world from starvation.

How? How did he flourish in the midst of tragedy? We don’t have to speculate. Some twenty years later the roles were reversed, Joseph as the strong one and his brothers the weak ones. They came to him in dread. They feared he would settle the score and throw them into a pit of his own making. But Joseph didn’t. And in his explanation we find his inspiration.

As for you, you meant evil against me, but God meant it for good in order to bring about this present result, to preserve many people alive. — Genesis 50:20

Joseph tied himself to the pillar of this promise and held on for dear life. Nothing in his story glosses over the presence of evil. Quite the contrary. Bloodstains, tearstains are everywhere. Joseph’s heart was rubbed raw against the rocks of disloyalty and miscarried jus- tice. Yet time and time again God redeemed the pain. The torn robe became a royal one. The pit became a palace. The broken family grew old together. The very acts intended to destroy God’s servant turned out to strengthen him.

“You meant evil against me,” Joseph told his brothers, using a Hebrew verb that traces its meaning to “weave” or “plait.”1 “You wove evil,” he was saying, “but God rewove it together for good.”

God, the Master Weaver. He stretches the yarn and intertwines the colors, the ragged twine with the velvet strings, the pains with the pleasures. Nothing escapes his reach. Every king, despot, weather pattern, and molecule are at his command. He passes the shuttle back and forth across the generations, and as he does, a design emerges. Satan weaves; God reweaves.

He redeemed the story of Joseph. Can’t He redeem your story as well?

You’ll get through this. You fear you won’t. We all do. We fear that the depression will never lift, the yelling will never stop, the pain will never leave. Here in the pits, surrounded by steep walls and angry brothers, we wonder, Will this gray sky ever brighten? This load ever lighten? We feel stuck, trapped, locked in. Predestined for failure. Will we ever exit this pit?

Out of the lions’ den for Daniel, the prison for Peter, the whale’s belly for Jonah, Goliath’s shadow for David, the storm for the disciples, disease for the lepers, doubt for Thomas, the grave for Lazarus, and the shackles for Paul. God gets us through stuff. Through the Red Sea onto dry ground (Exodus 14:22), through the wilderness (Deuteronomy 29:5), through the valley of the shadow of death (Psalm 23:4), and through the deep sea (Psalm 77:19).

Through is a favorite word of God’s:

When you pass through the waters, I will be with you; And through the rivers, they shall not overflow you. When you walk through the fire, you shall not be burned, Nor shall the flame scorch you. — Isaiah 43:2 (emphasis mine)

It won’t be painless. Have you wept your final tear or received your last round of chemotherapy? Not necessarily. Will your unhappy marriage become happy in a heartbeat? Not likely. Are you exempt from any trip to the cemetery? Does God guarantee the absence of struggle and the abundance of strength? Not in this life. But He does pledge to reweave your pain for a higher purpose.

It won’t be quick. Joseph was seventeen years old when his brothers abandoned him. He was at least thirty-seven when he saw them again. Another couple of years passed before he saw his father.2 Sometimes God takes His time: One hundred twenty years to prepare Noah for the flood, eighty years to prepare Moses for his work. God called young David to be king but returned him to the sheep pasture. He called Paul to be an apostle and then isolated him in Arabia for perhaps three years. Jesus was on the earth for three decades before He built anything more than a kitchen table. How long will God take with you? He may take His time. His history is redeemed not in minutes but in lifetimes.

But God will use your mess for good. We see a perfect mess; God sees a perfect chance to train, test, and teach the future prime minister. We see a prison; God sees a kiln. We see famine; God sees the relocation of His chosen lineage. We call it Egypt; God calls it protective custody, where the sons of Jacob can escape barbaric Canaan and multiply abundantly in peace. We see Satan’s tricks and ploys. God sees Satan tripped and foiled.

Let me be clear. You are a version of Joseph in your generation. You represent a challenge to Satan’s plan. You carry something of God within you, something noble and holy, something the world needs — wisdom, kindness, mercy, skill. If Satan can neutralize you, he can mute your influence.

The story of Joseph is in the Bible for this reason: to teach you to trust God to trump evil. What Satan intends for evil, God, the Master Weaver and Master Builder, redeems for good.

Joseph would be the first to tell you that life in the pit stinks. Yet for all its rottenness doesn’t the pit do this much? It forces you to look upward. Someone from up there must come down here and give you a hand. God did for Joseph. At the right time, in the right way, He will do the same for you.

2. Joseph was probably seventeen when he was sold to the Midianites (Genesis 37:2). He was twenty-eight when the butler, who promised to help him get out of prison, was released (Genesis 40:21–23). Two years later, when Joseph was thirty, Joseph interpreted Pharaoh’s dreams (Genesis 41:1, 46). And Joseph was about thirty-nine when his brothers came to Egypt the second time (Genesis 45:1–6), in the second year of the famine following the seven years of plenty.