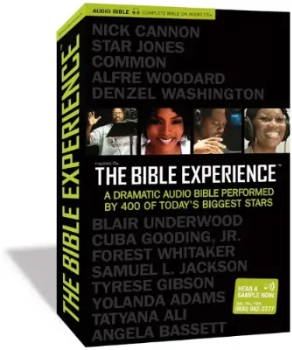 The Bible alone is powerful... but what happens when you add Academy-Award winning performers, state-of-the-art sound effects, and theatrical music to the greatest story ever told?

The Bible alone is powerful... but what happens when you add Academy-Award winning performers, state-of-the-art sound effects, and theatrical music to the greatest story ever told?

🛈  HOW OUR AUDIO BOOKS WORK:

■ Audio books purchased on FaithGateway are fulfilled by our partner, Glose. Here's the scoop:

■ For all Audio book purchases, you will be prompted to create an account or login with your existing FaithGateway username and password. This ensures accurate delivery of your items.

■ To access your Audio book(s) after purchasing, you will need to download the free Glose app to your phone or tablet OR you can read via your internet browser on Glose.com. For more information and a brief video about how to access Audio books purchased on FaithGateway, click here for instructions.

■ Audio books fulfilled through Glose cannot be downloaded for listening in other digital listening apps like iTunes, Google Play, or Audible.

Looking for the physical CD version?

What FaithGateway Customers Have To Say About This Bible:

“Excellent listening quality and experience this is, making it very engaging and enjoyable for all to learn and grow in! Highly recommended as another learning source!”

“I honestly love hearing the Bible, and reading it together with my NIV Bible. It is so dramatic and to hear the background sounds like your there watching unfold in front of you. Honestly I'm glad I bought it.”

"The Bible Experience is amazing! In the quiet of my devotion time this has been wonderful. What a wonderful way to “experience” the Bible."