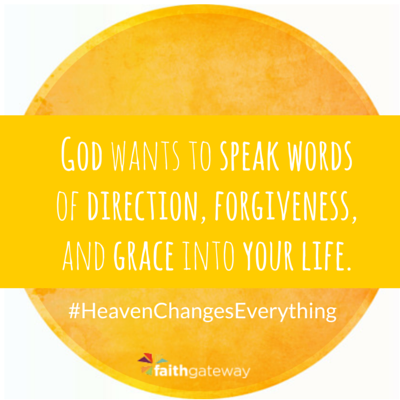 I . . . began working my way upstairs on my crutches. Down at the bottom, on the first step, I started getting mad at God.

“This isn’t fair,” I grumbled aloud as I struggled up the stairs, one crutch at a time, one step at a time. “I have to suffer and be in this pathetic state for them to give me the help I’ve needed all along.”

Feeling pretty smug in my martyrdom, I had just reached the top landing when a still, small voice arose in my heart:

And what did My Son do for you?

— Heaven is for Real

It’s fun to watch babies learn to walk. Parents are quick to videotape and count the number of steps their little ones take — until they fall, that is. The little ones, usually determined, get up and try again — and fall again. What do parents do then? They don’t scold, they don’t run away, they don’t duck their heads in shame as their children are learning to walk. Instead, they encourage and cheer each awkward step, and they reach down and set their kids back on their feet when they fall so they can try to walk again.

What is that? Do you call it love? Do you call it patience? Is it healthy parenting? I think it’s a great example of a different perspective, one that’s filled with grace.

This perspective is based in reality. Parents know their toddlers are going to fall. But they also have confidence that their children will eventually learn to walk because the odds say so. The parents learned to walk as toddlers. Big brother and sister eventually learned to walk. The neighbor’s kids did. And most likely the next little one will conquer walking as well.

Where does our heavenly Father find His perspective as He watches His children — you and me — in our daily walk?

Does He trust in the odds, personal experience, or something far greater?

God’s wisdom about your life can come from many places. Heaven gives Him an unequaled vantage point.

First, He made you. Like an engineer understands a car he or she designed, no one understands your limitations and possibilities better than the God who created you.

Second, God has incomprehensible experience. What type of degree do you earn for helping people of all generations learn to walk through the difficulties and challenges of this world?

Third, God is not surprised by your tomorrows. Nobody else, even the best loving parent, can look into your future and prepare you for what lies ahead and how to overcome it. He knows you’re going to struggle, make mistakes, and fail. But He also knows you’re surrounded by His gifts of forgiveness and grace.

So what can that type of perspective do for you? Well, speaking personally, it keeps me from getting off track. My life seems to be a constant battle of making choices. I want to be a good provider for my family, a loving husband for my wife, an involved parent for my children, and the right example for my congregation. But I constantly deal with obstacles like exhaustion, confusion, selfishness, lack of resources, and ultimately, lack of focus. When I get bogged down with these struggles, I tend to drift off course.

Fall 2002 was one of those extreme periods in my life. I had been swamped with a load of additional health challenges, and I could feel my boat not just drifting but sinking fast.

As a result, this small-town pastor threw himself a big pity party one day as he struggled up the church stairs on crutches, complaining and whining all the way.

With every step I managed to climb, I voiced one more justified complaint to God. I was rehearsing in my mind all the sacrifices I had made and was questioning my lack of reward. It was such a strange moment. As my body rose up the stairwell, my spirit was sinking further into a pit.

When I reached the landing, something happened that helped my spirit join the rest of my body. God spoke.

No, He didn’t send a bolt of lightning to correct my attitude. Instead, I sensed a voice speaking gently into my heart, asking, And what did My Son do for you?

Boy, that’s just like God! With just one small question, He can change your entire perspective. With that one reminder, all the selfishness I was struggling with was replaced by a mountain of gratefulness as I remembered the gift of grace I’d been given.

Some people don’t get to experience grace, though. They’re afraid to turn to God when life gets hard and they make mistakes and fall from their Christian walk. They expect to be ridiculed, condemned, or scolded. They’re trying to avoid the heavenly “I told you so” they anticipate rumbling down from the throne of God.

But that’s not what happens.

I’m not the only one who’s found that God speaks in a still, small, yet comforting voice when I fall. Elijah was a prophet in the Old Testament who thought life had become unfair. He felt like he was alone, without support; he was fed up and he was giving up. His words to God were, “Let me die.” (1 Kings 19:4).

Fortunately for Elijah, God had other plans. The Bible says God came to Elijah. But he didn’t speak to him roughly. He spoke to him in a still, small voice, just like he did for me.

I hope you’ve never gotten to that point where Elijah did, wanting to die, but if you have, know that even in the most desperate moments, God wants to talk to you, and He wants to speak words of direction, words of forgiveness, and words of grace into your life.

When you find yourself in that hard place, bitter and discouraged because you’ve fallen (again), pause for a moment and listen as though God himself were whispering these words into your ear: What did my Son do for you?

If you can accept that Jesus gave His life for you, as He did for me, consider this wonderful question the apostle Paul asks all of us: Why would God stop there? It makes no sense. Why would grace end at the cross?

The truth is, the cross is the beginning of grace. Accepting that truth gives us that all-important heavenly perspective.

You don’t see this verse stuck on many refrigerator doors or hung on many church walls, but believe me, it’s a verse you need to hide in your heart:

He who did not spare His own Son, but gave Him up for us all—how will He not also, along with Him, graciously give us all things? — Romans 8:32

Excerpted with permission from Heaven Changes Everything by Todd and Sonja Burpo, copyright Thomas Nelson.

Can you relate to expecting ridicule, condemnation, or a scolding when approaching the Throne of God? Have you ever felt the sting of trying to avoid the heavenly “I told you so”? If you’re in that place right now, take a moment to put on a heavenly perspective receive His unending grace and mercy for you. Please leave a comment on our blog. We would love to hear from you! ~ Devotionals Daily