An American in Prayer: Kneel Before the King The Greatest of Them All

1931 was a long and boring year. The stock market crash of 1929 plunged America into the depths of the Great Depression, and most businesses struggled to stay afloat. Among the struggling businessmen was a hotelier named Conrad Hilton. Americans weren’t traveling, and hotels were suffering. Hilton was borrowing money from a bellhop so he could eat.

It was during those difficult days of the Depression that Hilton came across a photograph of the Waldorf Astoria in New York City. The Waldorf was the holy grail of hotels with six kitchens, two hundred chefs, five hundred waiters, and two thousand rooms. It even had its own private hospital and railroad. In retrospect, Hilton observed that 1931 was “an outrageous time to dream.” But the economic crisis didn’t keep him from dreaming big, praying hard, or thinking long.

Hilton clipped the photograph of the Waldorf out of the magazine and wrote across it, “the greatest of them all.” Then he placed the photograph under the glass top of his desk. Every time Hilton sat down at his desk, his dream was staring him in the face. 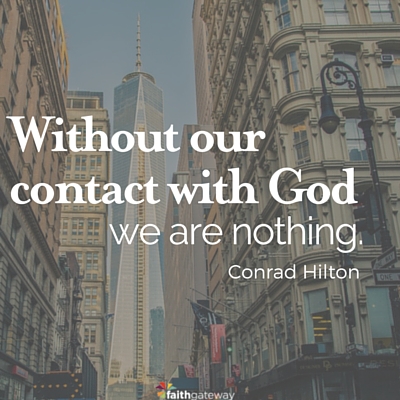 Nearly two decades came and went. America emerged from the Great Depression and entered the Second World War. The big band era gave way to bebop. And the baby boom began. All the while, Hilton kept circling the Waldorf. Every time he walked by the Waldorf, he tipped his hat in deference to his dream.

Hilton acquired an impressive portfolio of hotels, including the Roosevelt in New York City and the Mayflower in Washington, DC, but the Queen, as he called the Waldorf, eluded him. Several attempts to purchase the hotel failed, but Hilton kept circling. Finally, on October 12, 1949, eighteen years after drawing a circle around his dream, Hilton made his move. He purchased 249,024 shares of the Waldorf Corporation and crowned his collection of hotels with the Queen.

How did he do it?

Well, Hilton certainly possessed his fair share of business acumen and negotiating prowess. He was a hardworking visionary with a lot of charisma. But the true answer is revealed in his autobiography. It’s the answer he learned from his mother who had prayed circles around her son. In Hilton’s own words, “My mother had one answer for everything. Prayer!”

When Conrad was a young boy, his horse, Chiquita, died. He was devastated and demanded an answer. His mother’s answer was the answer to everything: “Go and pray, Connie… Take all your problems to Him. He has answers when we don’t.” That lesson was not lost on him as a young boy or as an old man. For eighteen long and boring years, Hilton worked like it depended on him and prayed like it depended on God. Then his persistence paid off.

The final section of Hilton’s autobiography is titled “Pray Consistently and Confidently.” Here Hilton provides a succinct summary of his approach to business — essentially his approach to everything in life: “In the circle of successful living, prayer is the hub that holds the wheel together. Without our contact with God we are nothing. With it, we are ‘a little lower than the angels, crowned with glory and honor.’ ”

The next time you stay in a Hilton, remember that long before it was bricks and mortar, it was a bold prayer. It was a long shot, a long thought. But if you pray like it depends on God and work like it depends on you for eighteen years, anything is possible. I particularly love the fact that Hilton tipped his hat to the Waldorf whenever he walked by. It was a gesture of humility, of respect, of confidence.

When you dream big, pray hard, and think long, you know your time will eventually come. Hilton certainly celebrated the acquisition of his big dream, but he never viewed the Queen as his greatest investment or achievement.

His greatest privilege and potential was kneeling before the King.

That’s what made the Queen possible. The Queen was always subject to the King.

Independence Day for all of our readers in America will be celebrated tomorrow! Now, more than ever we must be people of prayer, people who are willing to wait on God for His answers in His time. What wild prayer are you praying today? What are you trusting God to do? Come share with us on our blog! We would love to hear from you!