An Overview of the Bible Welcome to 30 Days to Understanding the Bible! This is the first step on a journey that can revolutionize your understanding not only of Scripture, but also yourself and the world around you. The Bible is the bestselling, most-loved, and most-impactful book ever written. Actually, the Bible isn’t a single book — it is a collection of sixty-six books written by more than forty individuals over a period of more than 2,000 years. It’s an enormous volume that contains a huge amount of information on a wide range of topics — including history, poetry, prophecy, geography, instructions, epistles, commandments, promises, and more.

For these reasons, the Bible can often seem intimidating… and even overwhelming. Maybe you have tried to learn about the Bible in the past and found it difficult to understand. Maybe you have been reading the Bible for years, yet you still lack confidence when it comes to expressing what it is and what it says. Or, maybe this is the first time you have opened its pages.

Regardless of your level of experience, what you will encounter with your group over the course of the next six weeks will provide a key to unlocking what the Bible says, what it teaches, and how to apply it to your everyday life. Through the videos that accompany each session, and the daily interactions in this study guide, you will build a solid foundation for engaging and understanding the most important book ever written.

To get started, take a few minutes to introduce yourself to anyone you do not know in the group. Then jump into the theme of this session by discussing the following questions:

Play the video segment for session one. As you watch, follow along with the main points listed in the outline below and record any key thoughts or concepts that stand out to you.

II. Structure: A key to mastering the Old Testament is under- standing that it contains only three types of books.

A. These three types of books are:
B. There are seventeen historical books in the Old Testament.

III. Geography: In addition to understanding the structure of the Bible, it is important to also understand the broad strokes of biblical geography.

A. The entire area described in the Old Testament is about the same size as the state of Texas.

B. Israel, the promised land for God’s people in the Old Testament, is roughly the same size as New Hampshire. 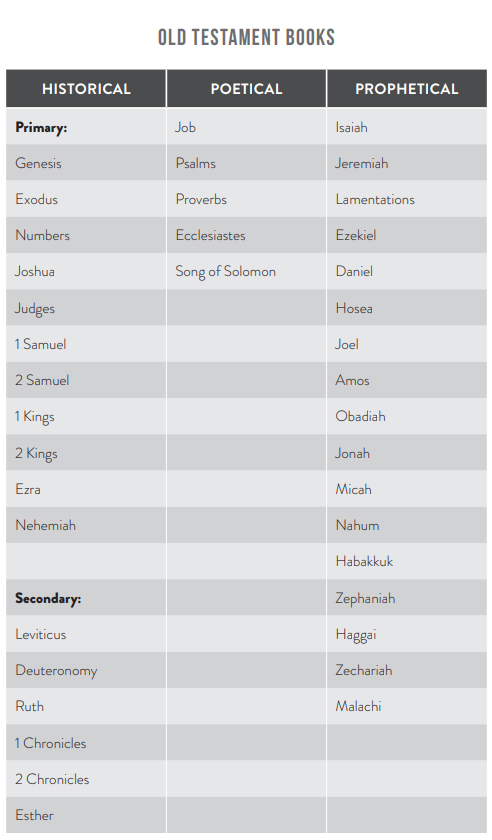 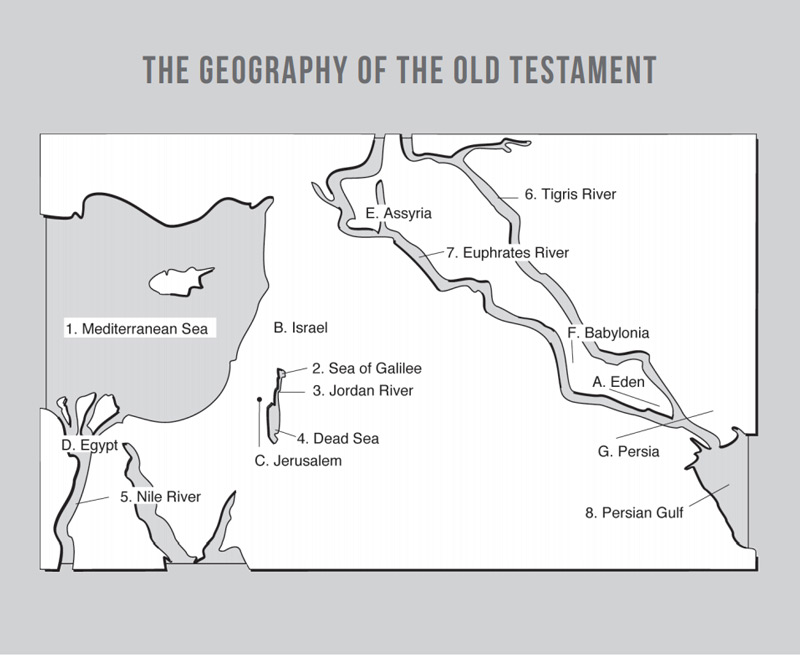 A. In the Old Testament:
B. In the New Testament:

V. Creation Era: The story of creation, the fall, the flood, and the tower of Babel.

A. Creation: God created everything in the universe out of nothing.

B. Fall: Adam and Eve were deceived by Satan and chose to rebel against God, which ushered sin into the world.

C. Flood: God performed a radical surgery on the world’s population, removing the cancer of evil through a worldwide flood. 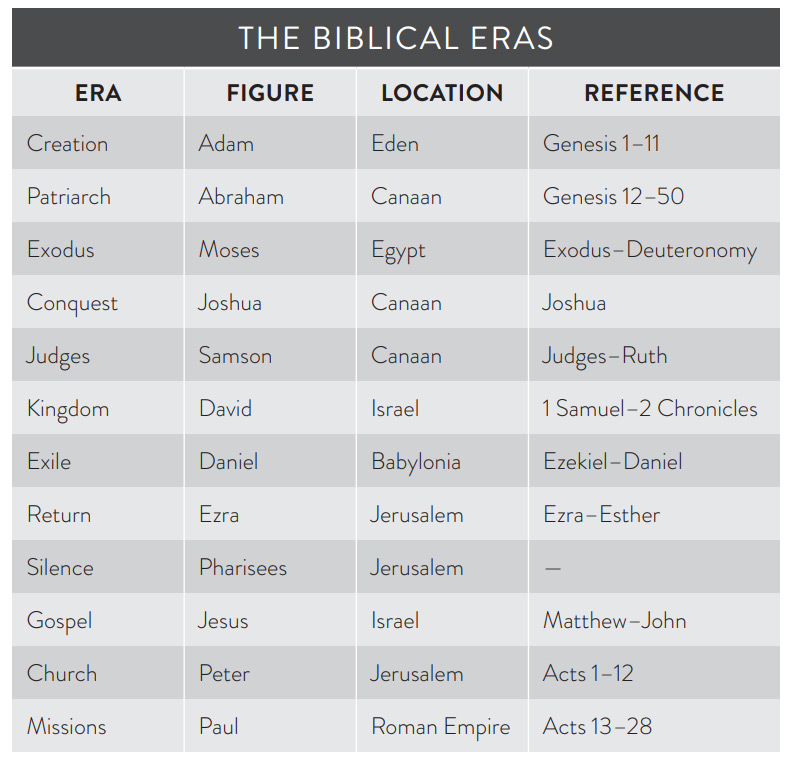 D. Tower of Babel: Humanity again rejected God’s command to spread out, inhabit and civilize the earth, instead attempting to establish a single civilization.

After watching the video, use the following questions to unpack what you learned as a group.

Understanding the Bible is a critical step for anyone who seeks to follow God — but it is never the final step. Instead, understanding what God’s Word says should always lead you to apply those truths in your life. In other words, knowledge should always lead to obedience. For this reason, each section of this study will include both material to learn and recommendations for putting what you have learned into practice.

Furthermore, following the truth of the Bible is not only something you do as an individual, but also something you do in community with other Christians. For that reason, the application sections in this study will encourage you to connect with a partner (or a small group of fellow participants) as you put what you learn into practice.

To get started, choose a partner or partners (or if your group is smaller, you may choose to do this as a group) who will join with you in seeking to grow over the next six weeks of this study. As you close this session, take a moment to discuss your thoughts. What are you feeling as you get started? What was something that stood out to you in this first lesson? What are you hoping to learn or experience as a result of going through this study?

Excerpted with permission from 30 Days to Understanding the Bible Study Guide: Unlock the Scriptures in 15 Minutes a Day by Max Anders, copyright Max Anders.

We’d love to hear your thoughts on 30 Days to Understanding the Bible in the blog comments!