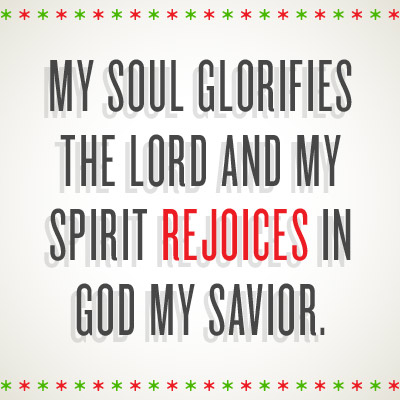 Before we get into the story of the one who comes at Christmas, and who He really was, I want to take you into a prelude — a prelude that is the story about the one person who knew Him best: Mary, His mother. Mary’s story is about a song she sang, before the Christmas night, when Gabriel came to her in Elizabeth’s sixth month of her pregnancy. The song shows that of all people, she “got it,” — what was about to happen. This is the lead-up to the Christmas event. And the two characters most in view were seen as being the least, with the least to give: a mother and a baby child.

So Mary composed the very first song ever inspired by the birth of Jesus. It is maybe the most influential song ever written. Maybe the most profound. It was written by a girl who was probably fifteen years old.

Yet the capacity of both her mind and spirit, and the amazing fact of the Son she carried and raised, means that Mary’s song can change your attitude and mindset and life — on Christmas day or any other. But the song did not begin well.

When the angel Gabriel told Mary that she was going to have a child, this was not welcome news. She was engaged to Joseph but not married. She would be an unwed pregnant teenage girl. She did not know at that point how it would turn out.

Joseph could reject Mary. She could be subject to stoning; according to Torah, that’s what was supposed to happen. For sure, as someone who was known to be pregnant before marriage, she would be the subject of rumors and gossip. If this child were in some sense to be the Messiah, there would be danger from other kings. And there was. Mary had to flee for her survival and begin married life in exile in Egypt. In a very real way, she suffered for the Messiah before the Messiah ever suffered for her.

But Mary sang her song. And she magnified God. She knew Him to be the Mighty One. So she said to the angel, Behold the Lord’s servant. Let it be according to your word.

Mary went on to write the first song of Christmas, sometimes called the Magnificat because in Latin it starts with that word. As in,

My soul glorifies the Lord and my spirit rejoices in God my Savior.

In Mary’s day, the most important man in the world was Caesar Augustus. He had been adopted by Julius Caesar. After Julius Caesar died, Augustus was declared to be divine, so he was given the title “Son of God.” When Augustus seized power, he ended the civil wars (you might remember Antony and Cleopatra); so he brought peace — Pax Romana. Because of this, he was called the peoples’ Savior, or Soter. The inauguration of Augustus as emperor was declared throughout the empire as “good news” — the same term from which we get “gospel .”

Notice that Rome would use four expressions to describe Augustus:

But Mary alone understood who Caesar was and who her Son was.

There are all these characters in the story: Joseph, Wise Men, Herod, shepherds, Elizabeth, Zechariah the priest… One person gets it. One person figures out who Jesus is. The very first identifier and proclaimer of the Good News, the Gospel of Jesus, is an unwed, maybe fifteen-year-old girl: Mary the theologian.

What song do you sing, at Christmas time or any other time? We are marked by the songs we hear from the people in our lives. Sometimes, if I hear a song often enough, I start to sing it too. Your song becomes our song. Mary had a song. How it must have pleased the heart of the Father when He thought this was the song His Son would hear. She must have sung it to Jesus all the time.

What’s amazing is to look at how in so many ways Jesus is Mary’s song come to life. She would have told Him how Gabriel said to her,

“Nothing is impossible with God.” And it isn’t; Jesus proved that.

Jesus would begin the single most compelling speech in history, the Sermon on the Mount, by telling people in humble states, “Blessed are the poor in spirit… blessed are those who mourn… blessed are the meek” — because through Jesus the kingdom of God has come to you.

One of the central characteristics of Jesus’ teaching about kingdom life is sometimes called the Great Inversion: the first shall be last; the least shall be greatest; those who give up their life will receive it.

The Great Inversion may be the central theme of Mary’s song: the humble will be lifted up; the rulers and the rich who exalt themselves will be humbled.

Mary would have sung her song to little Jesus: “He has filled the hungry with good things.”

Notice to this day that at Christmastime there will be Santa Clauses ringing bells at shopping malls to collect money. Jesus’ birth is the primary time of year that people’s hearts turn to give; that’s the song we sing.

We can imagine how many times Mary said to that little boy: “Your heavenly Father has always been faithful. If He ever asks you to do a hard thing, Son, remember how your life started. Remember what your mom said when she was a scared young unmarried teenage girl.”

Years later, in the garden, in the shadow of the Cross, the Father did ask His Son to do a hard thing: To take onto Himself the weight of the sins of the world — yours and mine — so that forgiveness and love could begin the Great Reversal. And the Son said, Not My will. Yours be done.

He was God of very God.
He was also His mother’s Son. Mary’s life is a prelude to His.

The Magnificat, Mary the theologian’s song, declared that she “got” it — She understood that this Child she was carrying was about to turn the whole world on its head! She had the privilege of sharing her knowledge of scripture, of prophesy, and of Gabriel’s message to young Jesus and to model daily trusting in God and daily laying down self. “Jesus’ birth is the primary time of year that people’s hearts turn to give; that’s the song we sing.” How are you singing that song to the world around you during the Advent season? Share your thoughts with us on our blog! We would love to hear from you! ~ Devotionals Daily