Courage for the Wild Ride 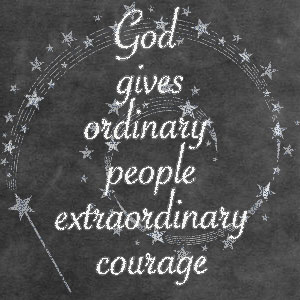 Now, Lord, consider their threats and enable your servants to speak your word with great boldness. — Acts 4:29

Standing in the infield as our #20 Home Depot car barrel-rolled seven times, I witnessed one of the most spectacular wrecks I’d seen in all my years of NASCAR competition. Dover International Speedway is nicknamed the Monster Mile for good reason — the banks of the turns are three stories high from top to bottom and cars come into them at speeds over 150 miles per hour. It is a punishing track that can destroy cars and test the nerves of even the most experienced racer. Our rookie driver, Joey Logano, was in that car as it finally ground to a stop on the track apron.

When Joey stepped up to the Sprint Cup series to drive for us, he was all of nineteen years old. We knew he was a talented driver and a stand-up young man — he’d gone through our driver development program, and in the process we also got to know Joey’s family. He was ready for NASCAR’s top-tier circuit. But one quality that you don’t get many opportunities to measure in an individual is personal courage; this wreck in late September gave me an insight into the fortitude of that young man.

After he was freed from the car, Joey was taken to the infield infirmary. Though badly shaken up, he didn’t have any injuries. “It just scared the heck out of me,” he said when I got there. “That was the wildest ride I’ve ever been on. You can’t go on a roller coaster any wilder than that.” He was smiling in the post-accident interviews, but I could tell he’d been rattled.

As a rookie, we would have let him take a pass on his next race, but talking through the wreck and its impact on his confidence, he thought it was important to get right back into a car and drive the next week. You know what? Joey made quite a statement to the NASCAR community by winning his very next race on the following Saturday.

Life can be a “wild ride” at times. To me, one of the greatest acts of courage is to stand up, brush yourself off, and keep moving forward after a setback. Peter and the apostles gave us a great example of this after the crucifixion, resurrection, and ascension of Jesus.

Peter and John showed such courage when on the way to the temple to pray, they stopped to address a lame beggar who sat by the temple gates every day to collect handouts. Peter told the beggar he didn’t have money to give but something more valuable. Then he commanded the man to stand up and be healed in the name of Jesus. The man became physically whole again and went about praising God.

The Pharisees weren’t happy to have a guy running around healed by a miracle of Christ’s power, so they threw Peter and John into jail. They released the apostles the next day but not before intense questioning. What was the verdict of the interrogation? We read in Acts 4:13: “When they saw the courage of Peter and John and realized that they were unschooled, ordinary men, they were astonished and they took note that these men had been with Jesus.” We also read that “many who heard the message believed” (Acts 4:4).

Now Peter and John had just come from a night in jail. More important, they knew that Christ had been mercilessly crucified and the Pharisees didn’t want the power of His resurrection being preached. What did Peter and John do? They got up, brushed themselves off, and kept preaching Christ. That took real courage, especially after they saw firsthand what had happened to Jesus.

Dear Father, I confess to You that I am not always courageous. I look around at circumstances before me and can become fearful. Please give me the courage that Peter and John displayed after the crucifixion of Christ to continue doing what they were called to do — preach the gospel to a fallen world. Help me to have the courage to move forward in my life and to trust the outcome to You. Amen.

Where do you need courage to keep moving forward in your own life? Maybe you’ve just gotten through a problem in a relationship that has shaken your trust in others. Maybe your business failed or you’ve lost your job. Perhaps your health is concerning you. Call on the God who gives ordinary people extraordinary courage. He will give you the courage you require.

You’re invited to leave your comments and thoughts below. ~ Devotionals Daily