Are You Creating a Masterpiece? 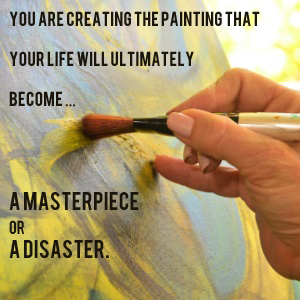 It was a cold night on the Gulf Coast, and I was wearing everything I owned, including an insulated denim jacket I had found in someone’s trash. It was almost midnight, and I was coming from a marathon session of cleaning fish for Jeannie’s Seafood at the intersection of Highway 59 and the beach road. I was headed back to the Gulf State Park Pier, exhausted and cold, eager to climb under its shelter and sleep.

As was my habit, I got off the main road and walked behind the homes and businesses on the beach. I did this in order to avoid attention from anyone who might wonder what a kid was doing walking the streets of a small beach town alone at night. I was trudging through the concrete pilings under the Pink Pony Pub when Jones joined me.

It was not a surprise, really. I was becoming accustomed to the uncommon way he would commonly appear. As usual, the old man was in jeans and a T-shirt. “How do you keep from freezing?” I asked.

“I think warm thoughts,” Jones replied, before noting, “Woowee! You smell like fish.”

I said, “Yeah, well, spend a day up to your elbows in twenty-six hundred pounds of ’em, and we’ll see what you smell like.”

Jones was quiet for a while. I suspected he had sensed my mood and was being careful. My current station in life had taken an emotional toll that was not beyond repair. The circumstances were evident, however, even to those who knew me in passing. Jones was aware that I was a threat to fly into a rage or burst into tears or rip someone to pieces with my words. One or more of these crazy manifestations of how I felt at the moment happened far too frequently, and sometimes they happened in public.

I didn’t want to behave or conduct myself in that manner, but I believed it was nothing I could control. This is just the way I am..

I cut my eyes toward the old man and kept walking. He had a habit of turning up most often, it seemed, when I was tired or depressed or angry. He was the only person remotely interested in a young man who was homeless and living on the beach.

The old man could make me laugh, and he did so quite often; but mostly, he made me think in ways I had never considered.

Jones had a knack for turning a situation or a deep-seated belief upside down or sideways in such a manner that it became perfectly clear and made total sense.

I didn’t look at him again, but I could hear the fine, sugary sand squeaking under his steps. He was quiet, simply offering his company to a lonely young man, and I couldn’t help feeling guilty for how I sometimes acted toward him. I often grew frustrated with the old man, sometimes to the point of anger, and then would regret the sharp words I used as I took that frustration out on my friend. In saner moments I wondered if the overwhelming frustration I felt might actually be with myself.

“You can’t just come up with some answer to everything,” I’d said to him only a few nights before. In an ugly tone of voice, I had sneered, “You act like an answer is waiting around the corner, and when you find it—boom!—the problem’s solved, like somebody waved a magic wand!” I remember stepping close to him for my big finish. With contempt dripping from my words, I had said, “Things are not that simple.”

Jones had shrugged and, with the barest hint of a smile, replied,

“Seems to me that when the answer appears, the problem is solved. You might be scared or frustrated or discouraged or all three, but when you find an answer, life is never the same again. So actually, son… things aren’t that complicated.”

I had wanted to scream.

Approaching the Holiday Inn, we could see that high tide was sending its waves to break upon the foundation of the resort’s pool area. Only a seawall protected the hotel’s elaborate concrete beach from the waves of the real thing; therefore, it was the only place on our walk where we couldn’t stay on the sand. I experienced this obstacle regularly and knew that to avoid wading through the surf, it was necessary to cross the pool deck.

Despite the security guard who roamed the hotel grounds at night, I wasn’t too scared. The lady who worked the night desk inside the lobby was also a friend of mine. I called her Mrs. Beverly and occasionally gave her fresh fish as my part of an unspoken agreement that prompted her to look the other way when I used one or another of the hotel’s amenities. Still, I was cautious. I didn’t want anyone in trouble with the hotel manager. Especially me.

I crouched low, making my way across the deck. Arriving at midpoint, right beside the deep end of the pool, I turned to tell Jones to do the same. The old man was moving casually, absolutely upright, hands in his pockets, with those leather sandals scuffling along the sandy concrete. I was striving for silence, and the old man’s sandals resonated like a metal rake dragging through gravel.

I hissed at him to hurry up, get down, and be quiet. But before I could continue my short trek,

Jones inexplicably smiled sweetly and reached toward me in a gesture that indicated he wanted to place his hand on my shoulder but instead… firmly pushed me into what was a very cold, unheated pool.

As I surfaced with a gasp, Jones was smiling as if he were curious or expectant or fascinated with the object in front of him.

I kicked to the side of the pool and grabbed hold of the edge at his feet. All the fire or meanness or whatever it was I carried around was suddenly gone. I wiped my eyes with my hands, looked up at him, and asked, “What was that for?” as he reached down to help me out.

Soon I was wrapped in ten or twelve towels from the Holiday Inn laundry room and drinking coffee from the pot in the lobby. We were sitting on the floor, huddled in the not-quite-inside, not-quite-outside doorway that led to the hotel tennis courts. It was not comfortable, but it was out of the wind.

After giving him the silent treatment for a time — conduct that I must admit had no effect at all — I peered at him sideways and said, “Jones. Man, I don’t get you. What in the heck was that for?”

He looked up at the ceiling, took a deep, contented breath, and crossed his arms comfortably. “Well,” he began, glancing at me briefly, then back to the ceiling. “Son, you are at this very moment in the biggest war you will ever wage in your life. It is confusing, but you’re fighting for what you’ll one day become. There are forces clashing for space in your head that you don’t recognize, can’t see, and won’t understand until you’re able to look back on the whole thing years from now.

“You know, a lot of folks will tell you that little things don’t matter.” He flashed me a quick look and added, “You’d better turn that on its ear, son. Sometimes, little things matter the most. Big things are almost always made up of little things. When you ignore little things, they often turn into big things that have become a lot harder to handle.

“‘Don’t sweat the small stuff,’” Jones said with disdain. “That’s a lie that’ll ruin your life.” He looked hard at me again and locked my gaze with his own.

“Your choices, your words, and every move you make are permanent. Life is lived in indelible ink, boy. Wake up. You’re making little bitty brushstrokes every minute you walk around on this earth. And with those tiny brushstrokes, you are creating the painting that your life will ultimately become — a masterpiece or a disaster.”

Jones shifted in the small space to gain a little comfort and faced me directly when he spoke again.

“Every single day for the rest of your life, somebody is going to push you in the pool. And you’d better decide now how you’re going to act when it happens.”

Jones squinted and leaned toward me. “Are you gonna come out of the water whining? Maybe crying or complaining? Will you come up mad and defiant, threatening everybody? Will you throw fists or worse?

“Or will you come out of the water with a smile on your face? Looking to see what you can learn… who you might help? Will you act happy though you feel uncertain?”

He stared at me for a beat or two before lowering his chin and speaking in an earnest tone. “It’s time to decide, son,” he said. “Almost every result that your life produces from this moment forward—good or bad—will depend upon how you choose. Every day, in one form or another, whether you like it or not, you will be pushed in the pool. You might as well decide right now how you’ll act when it happens.”

With that said, Jones got to his feet and left.

I was worn out, tired beyond measure, and I knew I had to leave soon. Before facing the cold night again, however, I dozed, resting somewhat, allowing my mind to drift over and around Jones. I thought again about why he never wore a coat. I thought about where he would sleep that night and about how generally strange he seemed to be. I thought about my life. I thought about Jones’s baffling words. And I wondered what in the world I was supposed to make of both.

Have you ever had a “Jones pushing you in the pool” experience? A time when someone shocked you into a different perspective? Or an occurrence that made you think about your life and direction? We would love to hear from you! Please join us on our blog! ~ Devotionals Daily

Therefore encourage one another and build each other up. — 1 Thessalonians 5:11