When I speak to pastors and leaders, I often ask them to do a simple exercise. I have them write down their church’s top five offerings to help their people in spiritual formation. After they turn in their answers, I define spiritual formation for them by describing a mature and equipped follower of Christ. I ask them to look at their five offerings and then pose the question, “Do all of your offerings get people to the destination I’ve just described? If so, raise your hand.” Often there will be no hands raised. How discouraging! Invariably, the collective list is skewed toward upfront events designed to dispense truth in scattershot fashion, events that get warm bodies in pews or big programs that generate all kinds of activity and involvement. Sometimes these are the only items on the list. And again, let me be clear: it’s not that these events and programs don’t help people in spiritual formation; they do. But they fail to take people to the destination, and they don’t adequately equip them for the journey.

There is an obvious disconnect between what the church offers and what people really need.

When leaders think about discipleship, the image that comes up, consciously or not, is not an hourglass; it is a funnel. The idea goes something like this: “The church is a funnel where we pack as many people as we can into our buildings, our stadium seats, our programs. The more we do our events and programs with relevance and excellence, the bigger the wide end of the funnel needs to be. We have a big mission, after all, so shouldn’t we go after that mission in a big context?”

“But what about the coaching and supporting part of discipleship?”

I have to ask in this hypothetical conversation.

“That’s where the truly committed trickle down into the narrow end of the funnel. To be honest, discipleship in a life-on-life manner is an afterthought or an addendum. At best, it’s an exclusive club for the spiritually mature.”

Now I’m not opposed to big-funnel church. Perimeter is a big church with big events and big programming. If growing in attendance was our primary goal, I’d be only about stretching the wide end of the funnel to the breaking point. But here is the catch: the kingdom doesn’t work that way. The primary objective of a funnel is to collect as many people as we can, and that’s not growth.

Instead, kingdom growth starts with something small like a seed, a tiny package in which all of the characteristics of the larger, fully grown plant dwell.

When we grasp that kingdom growth reflects the type of growth we see in a seed, we recognize that we need to invert the funnel. The drama that sets the stage for lasting growth isn’t what we see on the stage or in the gym where hundreds have gathered; it’s in the living rooms of the houses in the suburbs, in apartment clubhouses, around kitchen tables in the projects, and in the boardrooms of city center office buildings.

The motivation that propels the masses out into the world and leads to lasting spiritual growth isn’t a pep rally; it’s a huddle. As we were developing the process for life-on-life discipleship, we had seed-to-plant growth in mind. We understood that to effectively produce disciples, we needed to invert the funnel.

Again [ Jesus] said, “What shall we say the kingdom of God is like, or what parable shall we use to describe it? It is like a mustard seed, which is the smallest seed you plant in the ground. Yet when planted, it grows and becomes the largest of all garden plants, with such big branches that the birds of the air can perch in its shade.” – Mark 4:30-32

Just as you’d expect, there are challenges to doing discipleship in a life-on-life manner in a large church context. I’m the first to admit that this is hard. It’s a lot easier just to herd everyone into a big room and preach. And there are practical obstacles as well, obstacles that show up as soon as a potential disciple leaves college: spouses, kids, jobs, schedules, traffic, homes, yards, vacations. I’ll address these issues in later chapters, but for now it’s important to acknowledge that they exist. And because they do, it’s imperative to approach spiritual formation on a seedling level. You’ll give up if you are not convinced it’s the best way. An entry in my journal from 1999, once LOLMD had gained traction among our staff, reflects how convinced I was:

I spent the whole of yesterday meeting with our staff. All went well. We certainly have an outstanding group of servant leaders. We asked each staff to share their status regarding involvement in discipleship this coming September. Over 90 percent (probably high 90s), including support staff, are either leading a group or in a group. It’s now being modeled from the top down. My hope for the future effectiveness of our church is bound in discipleship. I long to see church growth taking place by multiplication (in decentralized groups) as opposed to by addition (in the centralized weekly gathering).

I feel like I’m leading a grand experiment which, though biblically based, has unusually high stakes. To fail will more than likely deflate my zeal and hope for giving my life in the leadership of an American church. But I remain convinced that we will accomplish the task. We may first have to become fewer and tighter as a church to get my arms around the team of players that will make it happen. It is my job to plant and water, but God’s to cause the growth. I must remain fixed on running the race with the proper motives rather than consumed with concern regarding the results of the marathon.

Lord, thanks for allowing me to run for your glory. May every stride be fully devoted to you. I love you.

One reason “fewer and tighter” is a discipleship nonnegotiable – and every bit worth the risk – is that the narrow end of the funnel is where authenticity can thrive.

To take a picture of a large group, a photographer must step back and use a wide angle lens. The bigger the group, the fuzzier the result. No one looks all that bad in a group picture, but you don’t really notice anyone either. But to take a portrait, the focus is sharper and the perspective is up close, revealing flaws that weren’t visible in the group shot. Life-on-life is spiritual formation with a telescopic lens; it brings life up close and personal so that no one can hide or, worse, fall through the cracks. For that reason it can be messy and, well, real.

My wife, Carol, has experienced this kind of authenticity in her relationships with the women she has led in groups over the years. Not long ago, one of the women in her current group sent an email to her group that champions the beauty of life-on-life better than anything else I could say about it:

One other reason discipleship occurs most effectively at the seedling, life-on-life level is that when growth happens in this real, transparent, deep way, that way of growth itself is reproduced.

Seeds produce more than plants. They manufacture, in the heart of the new plants, more seeds. And thus the small end of the funnel explodes into a wider context. A blade of grass becomes a lush lawn. A sprout of heirloom wheat becomes a meadow filled with grain. An acorn becomes a stand of majestic oaks. And the story goes on and on, uncontained and unstoppable, covering the earth with the glory of God.

Pastors, are discipleship groups/ life groups/ fellowship groups in your Church family? Do you encourage your congregation to grow life-on-life? Come join the conversation on our blog! We would love to hear from you about discipleship! 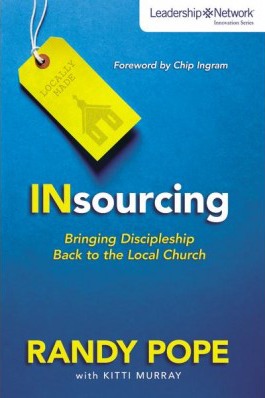