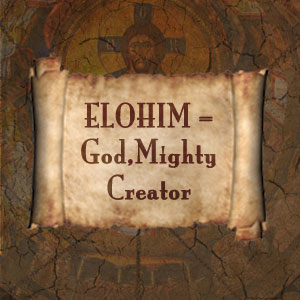 Then Jacob made a vow, saying, “If God will be with me and will watch over me on this journey I am taking and will give me food to eat and clothes to wear so that I return safely to my father’s house, then the LORD will be my God and this stone that I have set up as a pillar will be God’s house, and of all that you give me I will give you a tenth. — Genesis 28:20

Elohim (e-lo-HEEM) is the plural form of El or Eloah, one of the oldest designations for divinity in the world. The Hebrews borrowed the term El from the Canaanites. It can refer either to the true God or to pagan gods. Though El is used more than 200 times in the Hebrew Bible, Elohim is used more than 2,500 times. Its plural form is used not to indicate a belief in many gods but to emphasize the majesty of the one true God. He is the God of gods, the highest of all. Christians may recognize in this plural form a hint of the Trinity—Father, Son, and Holy Spirit. Elohim occurs thirty-two times in the first chapter of Genesis. After that the name Yahweh appears as well and is often paired with Elohim and, in the NIV, the two together are translated “the LORD God.”

Jacob, you may remember, was the twin who tricked his brother out of a blessing. Fleeing from his brother’s wrath, he had a dream one night in which he encountered the God of his grandfather, Abraham, and his father, Isaac. Promising him descendants as numerous as the dust of the earth, God told him: “All peoples on earth will be blessed through you and your offspring. I am with you and will watch over you wherever you go and I will bring you back to this land. I will not leave you until I have done what I have promised you.”

This was Elohim speaking, the Creator of the heavens and the earth. He made it all, He owned it all, and He could give away its fruit to anyone he pleased. Jacob asked for safety, food, and clothing—basic human needs. But God gave him so much more, making him a wealthy man and the father of numerous children. He even blessed Esau, the brother whose blessing Jacob had stolen.

Then as now Elohim desires to use His creative power, not only to sustain us and the world He has made, but to create for us a life filled with blessings, both physical and spiritual. Ask Him now for what you need, believing in both His power to bless and His desire to care for you.

Elohim, Mighty One, You made everything out of nothing, imposed order on chaos, gave birth to beauty, and called it all good. Help me to know You as the one true God who created everything and everyone, the One who has placed me on the earth for a purpose—to magnify Your name. Amen.

God didn’t stop being a Mighty Creator when He rested on the seventh day. He’s still actively and powerfully creating in our everyday lives, even when we do not recognize it. What do you need from God today? Share your thoughts on today’s message below. We would love to hear from you in the comments section below!