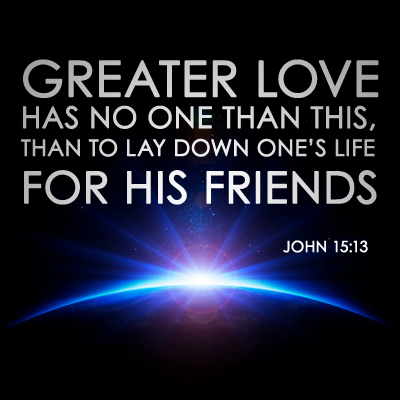 Greater love has no one than this, than to lay down one’s life for his friends. — John 15:13

What’s the most famous friendship in the history of pop culture? My money is on Captain James T. Kirk and his Vulcan first officer, Mr. Spock, from Gene Roddenberry’s Star Trek. Where the rugged captain played from his gut, often finding unique solutions to dangerous encounters, Spock was his ever-logical and supremely faithful counterpart.

Whether they were facing Romulans or Klingons or nemeses like Khan Noonien Singh, together they made a whole. And their relationship has endured since the original television show premiered in 1966.

It is no small thing when in 1982’s movie, Star Trek II: The Wrath of Khan, Mr. Spock faces his final moments separated from his friend by a clear wall. How does he end up stranded and alone? The wounded Enterprise is desperately trying to escape an exploding nebula, but without warp speed, they’ll never make it.

Spock quietly disappears from the bridge and descends to the engine room, where he restores the warp drive, knowing the leaking radiation will be fatal to him.

With the ship out of danger, now-Admiral Kirk rushes down to his friend but cannot even hold him as he dies, because of the radiation that has flooded the engine room.

“The ship… out of danger?” asks his friend.

The needs of the many outweigh —”

“— the needs of the few,” supplies Kirk.

“I have been, and always shall be, your friend.” Spock holds up his hand in the iconic Vulcan salute. “Live long and prosper.”

Spock’s dying statements to his friend mirror those found in Scripture. It is essentially the same message Jesus gave us in John 15:12–13, where He commanded us to love one another “as I have loved you. Greater love has no one than this, than to lay down one’s life for his friends.”

Friendship is a gift that God gives to us, just as He gave it to David and Jonathan in 1 Samuel 18:1: “And it came to pass, when he had made an end of speaking unto Saul, that the soul of Jonathan was knit with the soul of David, and Jonathan loved him as his own soul”. These men were friends to the end, and after Jonathan was killed in battle, David took his friend’s son into his household to raise as his own child.

Is your life rich with friendships? If you are one of the luckiest of us, you may have a friend whom you love as your own soul. Be sure to nurture that relationship and consider yourself a blessed person.

Dear Lord, thank You for friends. Help me appreciate them and not take them for granted. Show me who to offer my friendship. Amen.

• Is there someone new in your community? Reach out the hand of friendship and welcome her or him.

• Do you have old friendships you’ve allowed to wither away for lack of time? Reenergize them with a quick phone call, a Facebook message, or an e-mail, letting them know you’re thinking about them.

• Is there someone in your church or elsewhere in your daily life who doesn’t have many friends because he or she is socially awkward or shy? Offer your friendship, and you may be surprised what a delight you are to that person.

What about you? How do you plan to take action? Who can you offer your friendship to today? Who can you reach out to with appreciation? We would love to hear from you! Join the conversation on our blog! ~ Devotionals Daily