Through All The Seasons. . . God Is Loving and Powerful 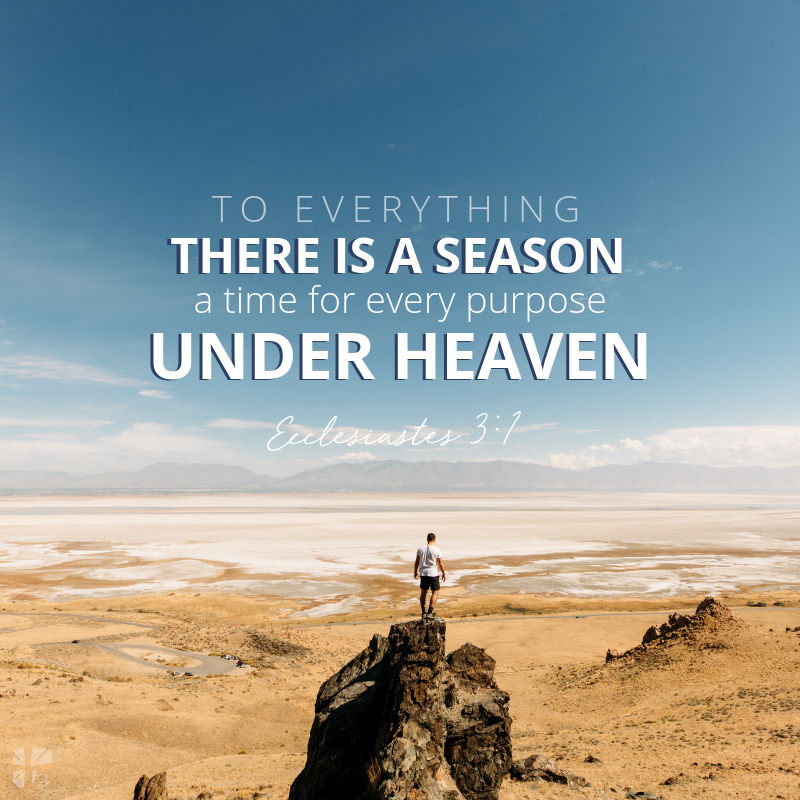 Ecclesiastes 3:1-8 — Why has this passage endured the ages as one of the oldest philosophical poems in our literary canon? It’s certainly among the most pensive passages of God’s Word, a beautiful meditation that casts a near-hypnotic spell over readers of any generation.

The author was the wisest and wealthiest man who ever lived, and this book is a chronicle of his lifelong quest for true happiness and joy. Solomon tried wealth, wisdom, work, and wild living. At the end of his wide-ranging experiments, he concluded that everything was an empty exercise in vanity. It was like trying to capture the wind in his hands.

As we come to the third chapter, we find Solomon facing an even bigger challenge, a “problem with God.”

I know all about the “problem with God.”

I would not have chosen cancer as a path to spiritual growth, nor would I wish such fear and pain on anyone. On the other hand, I do not see my illness as a random event, some miscellaneous accident of health. And I do not believe there was a moment when God was absent from the physical, emotional, and spiritual crisis I endured.

In fact, I found Him everywhere during that time. I found Him as never before. I glimpsed His face among the doctors and nurses who cared for me so skillfully. I saw Him there in shining power among the family of my church, and intimately among the family circle of my wife and children. He met me in the private chapel of my soul, where with each passing day I felt deeper in His grace and comfort. I found my Lord more present and more powerful.

Knowing there must be pain and suffering for us all, I dearly wish everyone could travel the road I did. I wish every human soul could see the face of God in the fear and turmoil.

So many walk a very different path; they experience only His absence.

Rabbi Harold Kushner, the author of When Bad Things Happen to Good People, when his own three-year-old son contracted a rare disease that took his life at a young age, penned his conclusions about God and suffering in order to provide answers to others in similar circumstances.

Kushner’s conclusion was a popularization of an ancient theological conundrum:

How can God be both perfectly good and perfectly powerful? The suffering in the world suggests that if He is God, He is not good; or that if He is good, He is not God. In other words, there must be something lacking in either His love or His strength, or He would cure every little pain.

Rabbi Kushner worked through the old enigma. He concluded that God is all-loving but not all-powerful. He cares deeply about the people He created, but after creating the world He backed away and allowed it to run without His interference.

Solomon had a different view entirely. He concludes that God is sovereign and in control, regardless of the imponderables that remain. Solomon sees God as being present with us but not helpful enough. The king wants to know why God does not improve the standard of life, do something about the aging process, show more favoritism to His children, and perhaps discontinue the program of human pain.

In his poem, there are fourteen negative statements and fourteen positive ones, and they fall into three separate categories. The first describes the influence of time on our bodies, the second focuses on our souls, and the last deals with our spirits.

And Solomon’s main thought? Well, it doesn’t take a Hebrew scholar to notice that the word time occurs twenty-nine times in these verses.

Time and Your Physical Life

To everything there is a season,

A time for every purpose under heaven:

A time to be born, And a time to die;

A time to plant,

And a time to pluck what is planted;

A time to kill,

And a time to heal;

A time to break down,

And a time to build up.

Solomon begins his contemplation with a sobering observation: birth and death both have their appointed times.

When my grandson, Ryland, was born, I flew to Baltimore for the event. As I peered through the nursery window at this beautiful new citizen of the world, it struck me that only a corridor away, some other citizen was being dispatched. Some family had gathered for the agony of farewell. It is not a lengthy walk between the nursery and the intensive care unit. We spend our own time making that trek between entrance and exit, womb and tomb.

Meanwhile, there is a time to plant and a time to harvest. Solomon refers to the food supply because he knows that God sets the boundaries of the seasons. God has built certain rhythms into His world. The steady repetition of the seasons provides comfort and a workable cadence to life.

We are a bit discomforted to read that there is a time to kill as well as a time to heal. Yet our bodies are in the process of dying every moment. Scientists tell us that every seven years we replenish all the cells within our bodies. There is an ongoing maintenance department in the human machine that is constantly changing out the old for the new. And it is governed by time.

Cancer cells, infection cells, or simply worn-out cells must be killed — so even killing has its time, and we are grateful. There must be a time to kill so we might also have a time to heal.

And what of “a time to break down, and a time to build up”? We build up in our early years, and we start breaking down as we get older — painful but true. How old is old? I was enjoying a birthday when David Todd, my six-year-old grandson, crunched the numbers on my age. He said, “If Poppy was a dog’s age, he’d be dead!” He was right.

There is a time for breaking down, but God is there. He is as powerful as He is loving, and you have the opportunity to experience His power all the more effectively and vividly when you turn to Him in the breakdowns of life.

Time and Your Emotional Life

A time to weep,

And a time to laugh;

A time to mourn,

And a time to dance;

A time to cast away stones,

And a time to gather stones; A time to embrace,

And a time to refrain from embracing.

Time is also involved with the operations of the soul, the seat of human emotions. There’s a time to cry, when tears flow freely; there are also times for laughter. Hopefully, the latter outnumber the former, yet tears are a part of life. The Bible says, “Jesus wept… He groaned in the spirit and was troubled” (John 11:35, 33). Job states, “My eyes pour out tears to God” (Job 16:20). The psalmist asks God to store his tears in a heavenly bottle, for they are precious (Psalm 56:8). And Psalm 126:5 promises, “Those who sow in tears shall reap in joy.”

Your tears are God’s jewels; they are precious to Him. The greater your suffering, the greater His ministry and grace for you.

There is a time to mourn and a time to dance. There is a time to hug, and there are times when hugging is inappropriate. God has given us a wide spectrum of emotions, and sometimes we feel we are at the mercy of our anger or depression or grief. It helps to know that each emotion is simply playing the part allotted to its own special time. We need our full spectrum of God-given emotions, for they are the emblems of our humanity. They mark us as children of a God who also has anger, grief, and laughter.

Time and Your Spiritual Life

A time to gain,

And a time to lose;

A time to keep,

And a time to throw away;

A time to tear,

And a time to sew;

A time to keep silence,

And a time to speak;

A time to love,

And a time to hate;

A time of war,

And a time of peace.

The last three verses have to do with inner decisions — the deep commitments of our lives. Sometimes we gain; sometimes we lose — money, weight, hair, loved ones, privileges, rights, responsibilities, joys, possessions. We collect and we throw away.

Unfortunately, at the personal level we seem far more interested in accumulating than in throwing away. We need to recognize the spiritual value of both, that there is a time and a season to get rid of stuff.

Solomon knew there was a “time to keep silence, and a time to speak.” The father in Proverbs continually admonishes his children to pay attention to words of wisdom and instruction, but he also warns against talking too much and becoming ensnared by one’s own words. There is no greater wisdom than knowing the seasons of the tongue — when it is time to speak and when it is time to keep silent.

There is a time for love and even a time to hate. A time to hate? Yes, of course. Even Jesus hated. He hated sin. He hated its mastery over human souls. He hated the wake of its destruction.

We need to learn how to hate that which is evil without hating the people who are evil.

The passage ends by reminding us that while we all long for a peaceful world, there is even a time when war is morally necessary. “A time of war, and a time of peace”.

Peter Muhlenberg was an Anglican pastor in Virginia. In 1774, he was elected to the Virginia legislature and was present at St. John’s Church in Richmond when Patrick Henry proclaimed, “Give me liberty or give me death!” Peter was so moved that he promptly joined George Washington’s army.

He recruited other men in his church, and they became known as the German Regiment under his command. It’s because of men like Peter Muhlenberg that America has been the home of the brave and the land of the free for more than two hundred years.

Everything has its appointed time from God. He is sovereign, but He is always faithful.

Through all the seasons of life, through all the undulating circumstances of the passing years, God remains both loving and powerful.

Have you experienced a “problem with God” in your life — through illness, loss, disappointment, or crisis as Solomon & Dr. Jeremiah did? What conclusion did you come to about God’s perfect goodness and omnipotence? We would love to hear from you! Please take time to comment on our blog!