In a Crisis? Keep Calm and Carry On In the days leading up to the war with Germany, the British government commissioned a series of posters. The idea was to capture encouraging slogans on paper and distribute them about the country. Capital letters in a distinct typeface were used, and a simple two-color format was selected. The only graphic was the crown of King George VI.

The first poster was distributed in September of 1939:

WILL BRING US VICTORY

FREEDOM IS IN PERIL

These two posters appeared up and down the British countryside. On railroad platforms and in pubs, stores, and restaurants. They were everywhere. A third poster was created yet never distributed. More than 2.5 million copies were printed yet never seen until sixty years later when a bookstore owner in Northeast England discovered one in a box of old books he had purchased at an auction. It read:

The poster bore the same crown and style of the first two posters. It was never released to the public, however, but was held in reserve for an extreme crisis, such as invasion by Germany. The bookstore owner framed it and hung it on the wall. It became so popular that the bookstore began producing identical images of the original design on coffee mugs, postcards, and posters. 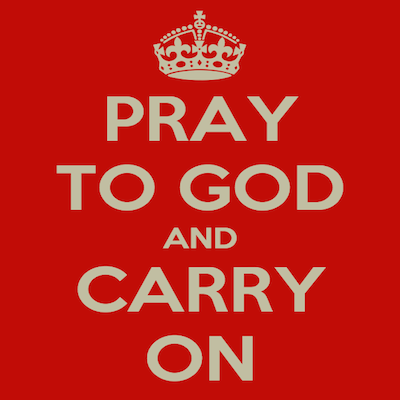 Everyone, it seems, appreciated the reminder from another generation to keep calm and carry on.

You can do the same. You can’t control the weather. You aren’t in charge of the economy. You can’t undo the tsunami or unwreck the car, but you can map out a strategy.

Remember, God is in this crisis. Ask Him to give you an index card-sized plan, two or three steps you can take today.

Excerpted with permission from God Will Carry You Through by Max Lucado, copyright Thomas Nelson, 2013.

Do you feel out of control in a crisis? Keep Calm and Carry On! Come join the conversation on our blog! We’d love to hear from you about asking the Lord for help just for today. ~ Devotionals Daily