Jesus: The Lamb of God A person is not held accountable for operating-table thoughts. The same rule goes for dental chairs and delivery rooms. On any occasion when people stick needles in your arm, fingers in your mouth, or scalpels into your skin, the patient is not penalized for bizarre imaginings.

At least that is the justification I give to mine. As far as surgeries are concerned, this one was simple. As far as I’m concerned, however, no surgery that contains the word cancer is simple. Since my face has pockets of cancer, I have found myself spending horizontal time on the table of a doctor who specializes in extracting them.

He has a silky midnight-radio voice and likes to assure me that my cancer isn’t serious. As he cuts on my temple, he says, “When it comes to cancer, you’ve got the best kind.” Forgive me for not rejoicing. And forgive my tacky thinking. But during the second surgery, after the fourth or fifth reminder that I have a good cancer, here is what I thought — didn’t say but thought: Then why don’t you take my cancer? Instead of cutting it out, take it in. Let’s swap places. You take my cancer, and I’ll take your knife.

Of course I didn’t say those words. Even in my drug-induced state, I knew better. Such transactions aren’t allowed. You can’t take my sickness. Nor can I take yours. You may give me your car or your cold, but your cancer? It’s nontransferable.

If you have cancer in your body, you have to deal with it.

Theologians call the act “substitutionary atonement.” A simpler term might be “holy love.”

To understand holy love, go to the Garden of Gethsemane. Surprised? You thought we’d go to the Cross? We will. The Cross is where we see the substitution, but the garden is where we feel it.

Then Jesus went with them to the olive grove called Gethsemane, and He said, “Sit here while I go over there to pray.” He took Peter and Zebedee’s two sons, James and John, and He became anguished and distressed. He told them, “My soul is crushed with grief to the point of death. Stay here and keep watch with Me.”

He went on a little farther and bowed with His face to the ground, praying, “My Father! If it is possible, let this cup of suffering be taken away from Me. Yet I want Your will to be done, not Mine.” (Matthew 26:36-39 NLT)

We’ve never seen Christ like this. Never heard such screams from His voice or seen such horror in His eyes. And never before has He told us: “My soul is crushed with grief to the point of death.”

How is such emotion explained? What was Jesus fearing?

Christ feared a cup of suffering. Cup, in biblical terminology, is more than a utensil for drinking. Cup equals God’s anger, judgment, and punishment. When God took pity on apostate Jerusalem, He said, “See, I have taken out of your hand the cup that made you stagger… the goblet of My wrath” (Isaiah 51:22). According to John, those who dismiss God “must drink the wine of God’s anger. It has been poured full strength into God’s cup of wrath. And they will be tormented with fire and burning sulfur in the presence of the holy angels and the Lamb” (Revelation 14:10 NLT).

The cup equals God’s wrath. Specifically, His anger toward our rebellion. We have ignored His Word, violated His standard. We have dismissed Him. And He is angry.

Many have trouble with the idea of this anger. “Why the big fuss over a few mistakes?” some wonder. “Everyone messes up now and then.” Everyone, that is, except God. He is holy. His holiness cannot turn a blind eye toward rebellion.

He feels the same way toward our sin that many of us felt toward the vandals who violated our church building. Some scoundrels broke into our sanctuary. They stole nothing. They took nothing. It was not their intent to rob; it was their intent to defame. Ascending the stairs to the baptistery, they wrote profanity on the wall and urinated on the towels.

My reaction to their actions was the same as yours: disgust, anger, disbelief. Do they know no reverence? The baptistery is a sacred place. The room is a blessed room. How dare anyone take the holy and use it for vulgarity?

How often has Heaven asked the same question about us? Are not our bodies holy? Much more than a man-made baptistery, we are God-made temples. “Don’t you know that your body is a temple of the Holy Spirit?” (1 Corinthians 6:19 CEB). Our tongues, our hands, our brains are the dwelling place and tools of God. Yet when I use this tongue to hurt, these hands to injure, this brain for my glory and not God’s, am I not vandalizing God’s temple?

What you and I feel toward vandals is what God feels toward us. And, this is sobering, what those vandals deserve is what we deserve — punishment. My reaction was, “Put them in jail. Let them pay the price.”

Never did I consider disguising myself as them and standing before the church and saying, “I’m the culprit. Punish me for my actions.”

Those thoughts never entered my mind. But they entered the mind of God. For God is not only holy; He is also love. And holy love finds a way to punish the sin and love the scoundrel.

In the Garden of Gethsemane Jesus chose to do just that. Envision Him on His knees amid the trees. Look long into the face of the One who looks long into Heaven. Realize this: He is being handed a cup that bears your name. If He drinks it, God will do to Him what God should do to you. If Christ drinks the cup, He will be your substitute.

And according to verse after verse in the Bible, Christ is willing to be just that:

For our sake He made Him to be sin who knew no sin, so that in Him we might become the righteousness of God. (2 Corinthians 5:21 NRSV)

For Christ also died for sins once for all, the righteous for the unrighteous, that He might bring us to God. (1 Peter 3:18 RSV)

The Greek word hyper means “in place of” or “on behalf of.” New Testament writers repeatedly turned to this preposition to describe the work of Christ:

Forgive me for sounding hyper about hyper, but you need to see the point. The cross of Christ is more than a gift; it is a substitution. By taking the cup, Christ was taking our place. Though He did not vandalize, he was treated as a vandal. Though healthy, He was given our cancer. In the garden He agreed to take the full force of a sin-hating God.

Holy love does such things. If Heaven were only holy and not love, we would be hopeless because of sin. If Heaven were only love and not holy, the world would be chaos for lack of goodness. But since Heaven is equally holy and loving, God Himself saves us from Himself. He punished the sin and saved the sinner by punishing the only sinless soul ever to live — Jesus Christ.

Excerpted with permission from Jesus, The God Who Knows Your Name, copyright Max Lucado.

Even in Jesus’ most stressed and anxious state, He ran to His Father to pray. He lifted up one last request even though He already knew the answer. How can we model our prayer lives after Jesus’ last moments in the garden before being crucified? Come share your thoughts on our blog!

Sign up for the Jesus Online Bible Study with Max Lucado 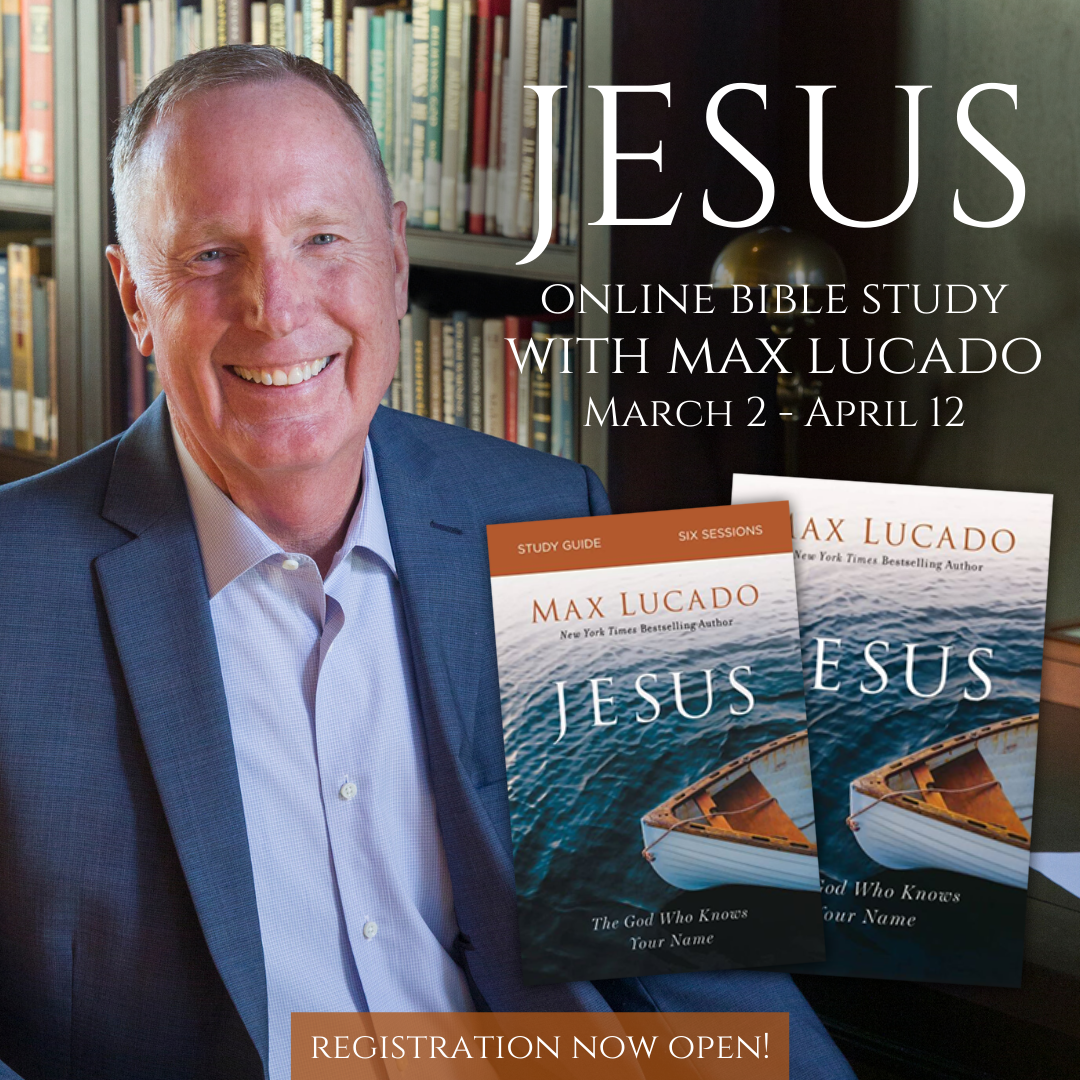 Savior. King. LORD. The Way. The Truth. The Life. Immanuel. Our Hero. The Lamb of God. Jesus.

With flesh and blood. Sweat and tears. Hangnails and sunburns. Rejection and exhaustion. Fully man. And yet fully God. Don’t you wish you could know not just His Story better, but know Him better?

Journey with Max Lucado in the weeks leading up to Easter through this six-week study, learn about the life of Immanuel, the Friend of sinners, our Compassionate Physician, the Great Teacher, our Miracle Worker, who became our Victorious Sacrifice.

The study gets started on March 2 and concludes on Easter Sunday. Join now for FREE access to Max's study videos, FREE downloads of the first chapters of the book and study guide, beautiful Jesus printables, access to the online community, and much more!