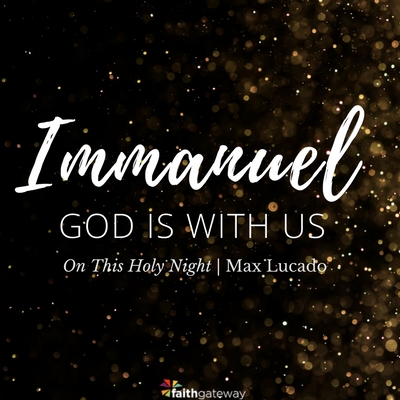 The white space between Bible verses is fertile soil for questions. One can hardly read Scripture without whispering, “I wonder…”

“I wonder if Eve ever ate any more fruit.”

“I wonder if Noah slept well during storms.”

“I wonder if Jonah liked fish or if Jeremiah had friends.”

“Would any woman have married Paul had he asked?”

The Bible is a fence full of knotholes through which we can peek but not see the whole picture. It’s a scrapbook of snapshots capturing people in encounters with God, but not always recording the result.

When the woman caught in adultery went home, what did she say to her husband?

After the demoniac was delivered, what did he do for a living?

After Jairus’s daughter was raised from the dead, did she ever regret it?

Knotholes and snapshots and “I wonders.” You’ll find them in every chapter about every person. But nothing stirs so many questions as does the birth of Christ. Characters appear and disappear before we can ask them anything. The innkeeper too busy to welcome God — did he ever learn who he turned away? The shepherds — did they ever hum the song the angels sang? The wise men who followed the star — what was it like to worship a toddler? And Joseph, especially Joseph.

I’ve got questions for Joseph.

Did you and Jesus arm wrestle? Did He ever let you win?

Did you ever look up from your prayers and see Jesus listening?

How do you say “Jesus” in Egyptian?

What ever happened to the wise men?

What ever happened to you?

We don’t know what happened to Joseph. His role in Act I is so crucial that we expect to see him the rest of the drama — but with the exception of a short scene with twelve-year-old Jesus in Jerusalem, he never reappears. The rest of his life is left to speculation, and we are left with our questions.

But of all my questions, my first would be about Bethlehem. I’d like to know about the night in the stable. I can picture Joseph there. Moonlit pastures. Stars twinkle above. Bethlehem sparkles in the distance. There he is, pacing outside the stable.

What was he thinking while Jesus was being born? What was on his mind while Mary was giving birth? He’d done all he could do — heated the water, prepared a place for Mary to lie. He’d made Mary as comfortable as she could be in a barn and then he stepped out. She’d asked to be alone, and Joseph had never felt more so.

In that eternity between his wife’s dismissal and Jesus’ arrival, what was he thinking? He walked into the night and looked into the stars. Did he pray?

For some reason, I don’t see him silent; I see Joseph animated, pacing. Head shaking one minute, fist shaking the next. This isn’t what he had in mind. I wonder what he said…

This isn’t at all what I imagined. No, I imagined family. I imagined grandmothers. I imagined neighbors clustered outside the door and friends standing at my side. I imagined the house erupting with the first cry of the infant. Slaps on the back. Loud laughter. Jubilation.

That’s how I thought it would be.

But now. Now look. Nazareth is five days’ journey away. And here we are in a… in a sheep pasture. Who will celebrate with us? The sheep? The shepherds? The stars?

This doesn’t seem right. What kind of husband am I? I provide no midwife to aid my wife. No bed to rest her back. Her pillow is a blanket from my donkey. My house for her is a shed of hay and straw.

The smell is bad; the animals are loud. Why, I even smell like a shepherd myself.

Did I miss something? Did I, God?

When You sent the angel and spoke of the Son being born — this isn’t what I pictured. I envisioned Jerusalem, the temple, the priests, and the people gathered to watch. A pageant perhaps. A parade. A banquet at least. I mean, this is the Messiah!

The child is Yours. The plan is Yours. The idea is Yours. And forgive me for asking but… is this how God enters the world? The coming of the angel, I’ve accepted. The questions people asked about the pregnancy, I can tolerate. The trip to Bethlehem, fine. But why a birth in a stable, God?

Any minute now Mary will give birth. Not to a child, but to the Messiah. Not to an infant, but to God. That’s what the angel said. That’s what Mary believes. And, God, my God, that’s what I want to believe. But surely You can understand; it’s not easy. It seems so… so… so… bizarre.

I’m unaccustomed to such strangeness, God. I’m a carpenter. I make things fit. I square off the edges. I follow the plumb line. I measure twice before I cut once. Surprises are not the friend of a builder. I like to know the plan. I like to see the plan before I begin.

But this time I’m not the builder, am I? This time I’m a tool. A hammer in Your grip. A nail between Your fingers. A chisel in Your hands. This project is Yours, not mine.

I guess it’s foolish of me to question You. Forgive my struggling. Trust doesn’t come easy to me, God. But You never said it would be easy, did You?

One final thing, Father. The angel You sent? Any chance You could send another? If not an angel, maybe a person? I don’t know anyone around here, and some company would be nice. Maybe the innkeeper or a traveler? Even a shepherd would do.

But you probably have.

You’ve stood where Joseph stood. Caught between what God says and what makes sense. You’ve done what He told you to do only to wonder if it was Him speaking in the first place. You’ve stared into a sky blackened with doubt. And you’ve asked what Joseph asked.

Each of us knows what it’s like to search the night for light. Not outside a stable, but perhaps outside an emergency room. On the gravel of a roadside. On the manicured grass of a cemetery. We’ve asked our questions. We questioned God’s plan. And we’ve wondered why God does what He does.

The Bethlehem sky is not the first to hear the pleading of a confused pilgrim.

He was obedient to God.

He was obedient when the sky was bright.

He was obedient when the sky was dark.

He didn’t let his confusion disrupt his obedience. He didn’t know everything. But he did what he knew. He shut down his business, packed up his family, and went to another country. Why? Because that’s what God said to do.

Can He do the same with you?

God still looks for Josephs today. Men and women who believe that God is not through with this world. Common people who serve an uncommon God.

Will you be that kind of person? Will you serve… even when you don’t understand?

No, the Bethlehem sky is not the first to hear the pleadings of an honest heart, nor the last. And perhaps God didn’t answer every question for Joseph. But He answered the most important one. “Are you still with me, God?” And through the first cries of the Godchild the answer came.

There are many questions about the Bible that we won’t be able to answer until we get home. Many knotholes and snapshots. Many times we will muse, “I wonder…”

But in our wonderings, there is one question we never need to ask. Does God care? Do we matter to God? Does He still love His children?

Through the small face of the stable-born baby, He says yes.

Yes, your sins are forgiven.

Yes, your name is written in heaven.

Yes, death has been defeated.

And yes, God has entered your world.

Immanuel. God is with us.

Excerpted with permission from On This Holy Night copyright Thomas Nelson.

Lord, help us to obey You! During confusion. When our story is full of questions. When the world seems to have gone haywire. When God’s plan looks so different from anything we ever imagined it would. Help us to authentically bring our questions to You, to be real with You, and then, even if we don’t hear a clear answer to the “I wonders”, to choose to obey You. We trust in the promise that You are with us! Do you have “I wonders” in your life, questions that make no sense that remain unanswered by God? Does your life seem off-track? Are you grappling with whether or not God is still with you? Join the conversation on our blog! We would love to hear your story of obedience through a season of questioning God! ~ Devotionals Daily