Killing Lions and the Quest for Manhood We feature a lot of content for both men and women here at FaithGateway, but today, guys, this one is just for you… John Eldredge, author of Wild at Heart (nearly 5,000,000 copies sold), has just released his latest book Killing Lions: A Guide Through the Trials Young Men Face, co-written with his son Sam Eldredge.

This book was born out of a series of weekly phone calls between John and Sam that eased the transition to manhood. They talked about everything, from pursuing beauty, dealing with money, getting married, chasing dreams, knowing something real with God, and how to find a life you can call your own. Those conversations are captured for the benefit of other young men in Killing Lions. The title comes from a Masai tradition; a boy knows he has become a man when he kills a lion.

Killing Lions is more than fatherly advice. It is an invitation into a journey: either to be the son who receives fathering or the father who learns what must be spoken.

Watch the Video for Killing Lions 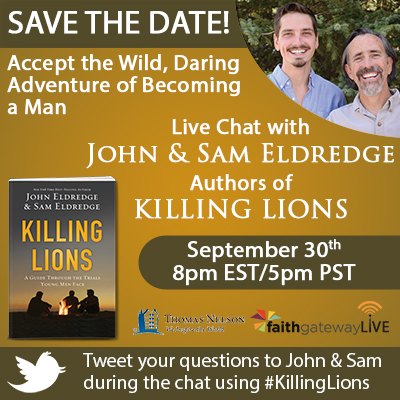 Do not fly so high with your decisions that you forget that a decision is but a beginning. – Søren Kierkegaard

When I was a boy, I loved the Choose Your Own Adventure books. At the end of the page you had a choice to make, usually something simple like “Do you climb the mountain even though it looks stormy, or do you head back to the cabin?” and depending on your choice you turned to a new page. I think the appeal for me was having immediate results for my choices. That and being able to peek at what would have happened if I went the other way. I died a lot in those books, come to think of it, and I can’t always say it was because I was living on the edge with my choices – sometimes I just wanted to see what would happen if I chose not to put on the parachute. They weren’t always the most creative with their endings. Pretty morbid reading for youth fiction, but hey, some crazy stuff gets printed nowadays.

But life isn’t as obvious as those books, with the ability to turn back a few pages. In the past six months I have been faced with the following decisions: Should I move down to a friend’s place in San Clemente to save money and get out of town? Do I need to sell my car and buy a better one, and if so which one? Do I need to get a credit card? I don’t have one yet, and several people have told me I need one to start building credit (whatever that is). What kind of work should I be looking for now that I quit my last job? The biggest, most daunting decision facing me was this: Do I ask Susie to marry me? Is now the right time? And, what does that mean for our future if I do?

Sometimes I wish I had what Melchizedek gave Santiago in The Alchemist, just before he set out on his journey.

“Take these,” said the old man, holding out a white stone and a black stone that had been embedded at the center of the breastplate. “They are called Urim and Thummim. The black signifies ‘yes,’ and the white ‘no.’ When you are unable to read the omens, they will help you to do so.”

I think they would get ground to dust pretty quickly if we had them. But we don’t, and making a decision can feel like a shot in the dark. Instead, I have… a computer: my personal looking glass into the circus of information and possibilities.

I’ve spent a lot of time in front of a computer screen looking for jobs and grad schools. Most everyone since the turn of the century has devoted time to the glowing god. But I have spent hours upon hours digging through the torrent of information trying to find answers. I am not sure how my grandfathers found employment. Probably by just walking in the door somewhere or through a mutual friend. These days I wade through online web postings and alumni connections. I have poured over listings and online reviews and search engines for graduate programs. The only real difference I noticed between the online search and the massive convention I attended in Chicago was the noise level. “We live in the age of information,” says the old recording of an announcer in my head; so why does finding direction feel like a parade of hopeless metaphors? I’m drinking from a fire hose and snorkeling through mud. I’ve been handed a spyglass and told it holds the key, only to gaze through and find the chaos of a kaleidoscope.

More information doesn’t seem to help. I feel like I’m drowning in it. I just learned how to tie a shemagh, found the best noodle bar in the Minneapolis-Saint Paul airport (Shoyu), and discovered twelve tips to the ultimate workout (it always involves buying something, which is weird). When I look for a job or try to map out my dreams, or some other future-oriented activity, somehow it almost always feels futile eventually.

I’ve tried making pro-and-con lists, but they have taken me nowhere. Realistically, I was only guessing as to the obvious benefits and consequences, but I doubt I had any real idea what I was actually weighing. Once I made a timeline of several possible future paths, like I was trying to peek at my own Choose Your Own Adventure. It was much less exciting, and when I dug it back up the other day, almost nothing had panned out like I thought it would.

Every so often, as the threat of becoming stagnant creeps in, I’ll ask myself, “What are my dreams? Where do I want to be in five years?” as though it will give me a clear picture of where I want to be moving. It always fails for one reason or another. The answers that spring up feel too vast or too vague; how does “change the world” or “live an important life” or “write” or “do something innovative and exciting” map out what to do this afternoon or tomorrow or the day after? I get stuck in the broad, the vast. I feel like I am in the middle of a desert with no discernible features in any direction and no clue which way to start walking.

Up to the point of college, the biggest decisions we were forced to make were between home economics and outdoor sports as an elective, or white and brown rice at Chipotle. Now every choice affects our careers, our relationships, where we live, how we will survive – and each one feels more weighty than all those before it.

Yes, it feels that way. The twenties sure feel like the decade of decision making, don’t they? Money, jobs, women, love, revolutions, dreams – everything we have been talking through is going to require some serious and sometimes constant decision making on your part.

And though I feel our decisions are weighty, they aren’t nearly as overwhelming as they feel when we are faced with them. I have never found pressure a good motivator for making decisions, nor found decisions made under pressure to be particularly good ones. So let me first try and lift some of the pressure off the decision-making process.

Your generation has been inundated with the promise that, “You can do anything.” The cliché is a staple of every graduation speech, as you said, but it began far back in elementary school with good old Dr. Seuss:

You have brains in your head.

You have feet in your shoes.

You can steer yourself

any direction you choose.

You’re on your own. And you know what you know.

And YOU are the guy who’ll decide where to go.

Heady and exhilarating stuff for a first grader. The college graduate begins to lose the jaunty promise and feel the weight of decision making descend. A limitless universe of options is not a gift, not even an opportunity to dream; it is overwhelming. Paralyzing. And untrue. You can’t do everything. The future is not an endless horizon before you; you cannot simply head off in any direction. Given who you are and how you’re wired, Sam, you will never, ever be a professional baseball player, concert cellist, orthopedic surgeon, mathematician, or member of parliament. You get my point. The list is actually quite long. When you consider your age, your situation, your gifting and training, the country in which you live, the economic forecast, I think you’ll find that the horizon is not nearly as vast as you have been told – or as the Internet makes it seem.

The truth is, the options before you are limited and that is a great relief. The open ocean is beautiful to look at, but terrifying if you have to navigate it in a small boat. But you are not facing the open ocean. God puts us within a context, with a limited gifting and limited resources, and that is immensely kind.

You know, this actually sounds discouraging, like you are taking away from the bright future of possibilities. You sound like a naysayer.

Not at all. When Jesus said, “Broad is the way to destruction… narrow is the path to life,” we don’t recognize it for the relief it is (Matthew 7:13). A road as vast as the horizon is no road at all. If you were driving from New York to Los Angeles and the road before you was twenty miles wide, you would wander back and forth for weeks, turning in wrong directions constantly trying to find your way. Now add the chaos of hundreds of thousands of other motorists trying to do the same. Of course the broad way leads to destruction.

Columbia business professor Sheena Iyengar conducted some well-known research on consumer choices—how folks respond to the myriad of jams and jellies on a store shelf. Given five to choose from, people make a choice, but given twenty-five to choose from, they simply walk away in indecision, with no jam at all. She said that “in reality” people find “more and more choice to actually be debilitating.”

Do you recall our trip to Buenos Aires? The main road through downtown was called Avenida 9 de Julio; it is the widest avenue in the world – up to seven lanes running in both directions. Picture yourself as an ant trying to find his way home using so broad a path. This is the psychological effect of telling the Internet generation, “You can do anything!” It simply isn’t true. When you begin to factor in decisions based on reality, opportunity, finances, and the constraints of love, I think you will find the road to life refreshingly narrow – that is, a path you can actually follow.

Excerpted with permission from Killing Lions: A Guide Through the Trials Young Men Face by John Eldredge and Samuel Eldredge, copyright Thomas Nelson, 2014.

Are you in that season of “decisions, decisions”? Do you have a son or daughter in that season? Come join the conversation on our blog! We’d love to hear from you about making wise and godly decisions when it seems like there are too many choices and not enough direction!