The Life of Jesus: A Chronological Study Our Bible Study this week focuses on the life of Jesus as presented in the Gospels, and a comparison and contrast of accounts in Matthew, Mark, Luke and John. This study is an excerpt from the New Testament introduction to the new NIV Integrated Study Bible (NIVISB), which presents the Bible in chronological order so that when people read the gospels, they can read all of the accounts presented next to each other. The NIV Integrated Study Bible compares and contrast texts, including background material and historical time lines, and explains the interconnectedness of different portions of the Bible. We hope you enjoy this excerpt to gain a fuller understanding of the events that took place in the life of Jesus.

The Life of Jesus

The Old Testament covers 1,600 years of historical narrative from the call of Abraham (about 2091 BC) to the prophecy of Malachi (about 430 BC). The historical narrative of Matthew through Acts covers only about 53 years, from the births of John the Baptist and Jesus (about 6 BC) to the Roman imprisonment of Paul (AD 59). Although Matthew and Luke narrate the birth of Jesus and some stories of his childhood, the Gospels focus on the ministry of Jesus from about AD 26 to 30. The letters of John and the Revelation were written near the end of the first century AD, but do not continue the narrative of the apostolic era.

Integrated into the historical narrative of the Gospels are conceptual parallels from Acts and 1 Corinthians, as well as genealogies from Ruth and 1 Chronicles.

Dating the Life of Jesus

The 12-month, 365.25-day solar calendar used by most of the western world was introduced in 46 BC by Julius Caesar and is therefore called the Julian calendar. The Romans numbered their years relative to the two consuls who took office each year. In AD 525 a monk named Dionysius Exiguus invented the concept of dividing the Julian calendar into the years numbered before Jesus was born and the years of the Lord. The Latin for the “year of the Lord” is Anno Domini, abbreviated “AD.” By 1525, when Pope Gregory XIII reformed the Julian calendar into the Gregorian calendar most widely used today, the abbreviation “BC” had become standard for designating the years “Before Christ.”

Dionysius incorrectly calculated the birth year of Jesus as AD 1. Herod the Great, king of Judea at the time of Jesus’ birth (see Mt 2:1), actually died in 4 BC. Since Herod attempted to kill the newborn “king of the Jews” (Mt 2:2) by ordering the murder of all the boys in Bethlehem two years old and younger, most scholars deduce that Jesus must have been born about 6 BC. As to the date for the crucifixion, Jesus died on a Friday, the day before the Feast of Unleavened Bread was celebrated. Of the most probable dates between AD 27 and 33, most scholars prefer Friday, April 7, AD 30. As to the length of Jesus’ ministry, Matthew, Mark and Luke mention only one Passover, making it possible that Jesus’ ministry lasted only one year. But since the Gospel of John mentions three Passovers (see Jn 2:13; 6:4; 13:1), Jesus’ ministry must have lasted at least two years. Luke states that “Jesus himself was about thirty years old when he began his ministry” (Lk 3:23). If Jesus was born in 6 BC, this would place the beginning of Jesus’ ministry in late AD 26 or early 27, with the crucifixion about three-and-a-half years later. This chronology is reflected in the chart on page 1135 and the timeline throughout this section.

Because the one story of Jesus is narrated in four canonical Gospels, many attempts have been made to integrate this story into a single account. The first known attempt was by the Christian apologist Tatian in about AD 170. According to the church historian Eusebius, Tatian “formed a certain combination and collection of the Gospels, . . . to which he gave the title Diatessaron” (Church History, 4.29.6).

“Diatessaron” in Greek means one account “by means of four.” This blending of four Gospels into one account is often called a “harmony.” Although a harmony contains all the details of the life and sayings of Jesus, it loses the unique structure and context of each Gospel. Eusebius himself came up with a different approach. According to the Introduction to Novum Testamentum Graeca (Stuttgart: Deutsche Bibelgesellschaft, 27th edition 1999, p. 79*): Eusebius divided the four Gospels into small units by content, and organized them into ten canons. Canon I lists the pericopes represented in all four Gospels, canons II–IV those in three, canons V–IX lists those found in only two Gospels, and canon X lists the sections which are peculiar to each Gospel.

The Eusebian canons allow a parallel or “synoptic” approach to the Gospels (“synoptic” in Greek means “viewed together”). A book that arranges the Gospels into parallel columns is technically a synopsis or a parallel, but is often called a harmony of the Gospels. As with the OT, this is the approach used in the NIVISB.

Comparison and Contrast Between the Gospels

The Gospels of Matthew, Mark and Luke are often called “synoptic,” meaning that they can be “viewed together” for their similarities, as well as analyzed for their differences. Many scholars believe that Mark was the first to be written and that Matthew and Luke used Mark as the basis of their work. Out of Mark’s total of 661 verses, 606 are adapted by Matthew and 380 are adapted by Luke. Only 31 verses in Mark have no parallel in either Matthew or Luke. In addition, Matthew and Luke have 250 verses in common that have no parallel in Mark, leading scholars to assume they had another written source containing mostly sayings of Jesus, now lost to history. (This assumed document is often called Q, from the German Quelle, which means “source.”)

The Gospel of John, on the other hand, has far fewer details in common with the Synoptics. All four Gospels mention John the Baptist as the forerunner of Jesus, the feeding of the five thousand, the triumphal entry, the last supper, and the crucifixion and resurrection of Jesus. But most of Jesus’ sayings and miracles recorded in John are unique to the fourth Gospel.

Most Gospel parallels in the NIVISB are chronological. Because Jesus often said similar things in different contexts, most of these duplicate sayings are not shown as conceptual parallels. But some longer and important passages are paralleled in two locations, like the two versions of the Lord’s Prayer in Matthew 6:9-3 and Luke 11:2-4. 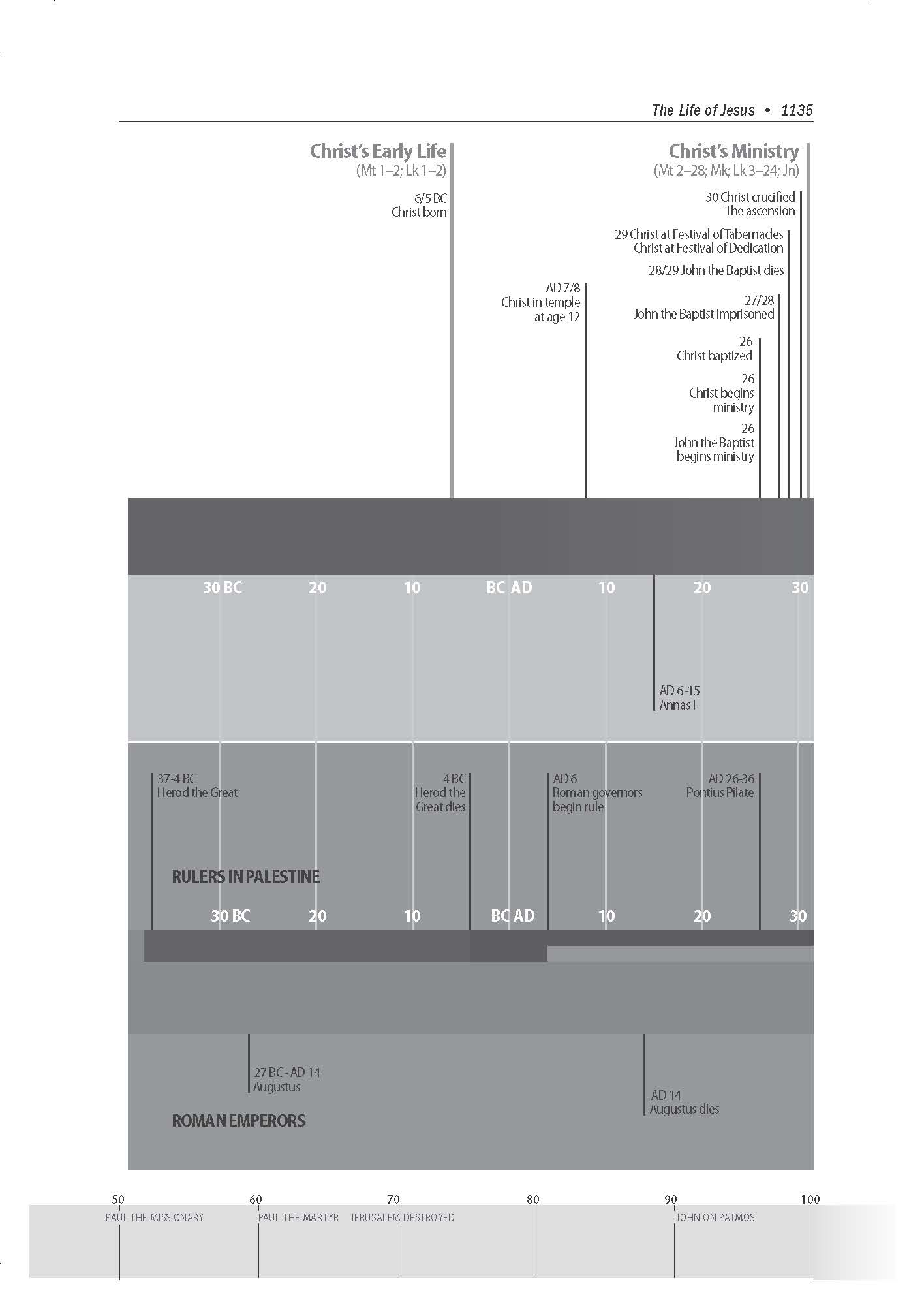 Click on the timeline above to view a larger image and printable PDF of The Genealogy of Christ from the NIVISB.