Making the Best Out of a Bad Situation 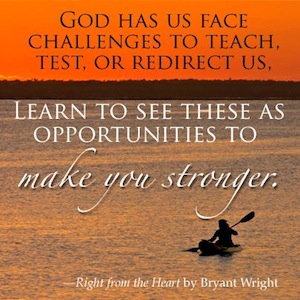 These things I have spoken to you, so that in Me you may have peace. In the world you have tribulation, but take courage; I have overcome the world. — John 16:33

Winston Churchill inspired the free world as he defiantly declared, “We shall never surrender!” during England’s darkest days. History has shown that he, more than any other person, can be credited with saving Britain from an almost certain enslavement by the Nazis. Yet as World War II ended, his beloved country unceremoniously dumped him as its prime minister. Attempting to comfort him, his wife declared that this rejection might actually be a blessing in disguise. “If it is,” he replied, “then it is certainly very well disguised.”

Despite this humbling rejection, Churchill went on with his life. In fact, the following year he made the “Iron Curtain” speech upon which the free world based its policy during the Cold War. He also won a Pulitzer Prize for his six-volume history of World War II and served another term as prime minister and many years as the elder statesman of the free world.

Jesus warned that “in [this] world, you will have tribulation.” You will face many rejections, roadblocks, and even landmines in your life. Sometimes God allows us to face these challenges to teach, test, or even redirect us. Learn to view these hardships as opportunities to make yourself stronger.

You just might discover that Mrs. Churchill was right! It could be a blessing in disguise.

Are you facing a trial, rejection, or setback (a well-disguised blessing)? How can you view your humbling circumstances as an opportunity to become stronger? Share your story with us on our blog! We would love to hear from you! ~ Devotionals Daily