My brother-in-law Jep is the youngest of the four Robertson sons. He was always a pretty good kid who never got into much trouble. But when he turned eighteen, he started hanging around with the wrong group of guys. Even though Jep had never been around drugs and drinking, and he knew better than to get involved in those things, he began to make poor choices. He confesses now that he figured he was a man and wanted to experiment.

Before he knew it, he was involved pretty seriously in drugs and alcohol. His weight dropped to 130 pounds because he was putting all kinds of things into his body other than food. He knew he had a problem when he woke up one night with one foot in his truck and the rest of his body hanging out the door.

But sometimes, even when we can see how deep we are in sin, we can’t figure out how to get out.

He was worried that if he told his family, they would be disappointed in him, so he continued to be untruthful about where he was and who he was with.

One day he found a note on his truck from Willie that said, “I know what you’ve been up to. We need to talk.”

At that point all Jep could think was, “Oh no.” He didn’t call Willie back right then, but a few days later, he went to his parents’ house and saw all of his brothers’ trucks parked there. He walked in, and there sat his dad and all his brothers.

Phil said, “We know what you’ve been up to. You got two choices, son. You can find someplace else to work and live while you wreck your life with drinking and drugs, or you can do what it’s going to take to quit this stuff.”

Jep fell on his knees crying and said, “What took y’all so long?”

To his surprise, nobody got mad at him for what he was doing. Nobody made him feel worse than he already felt or made him pay for the heartache and humiliation he’d caused. Instead, they cried and hugged him. Phil put him on three months of house arrest to keep him away from bad friends and temptation, and every day Phil and Jep studied the Bible together and went hunting to keep Jep occupied and on track while he was getting sober.

For Alan, that morning was one of maybe three times in his adult life when he has cried openly. The reason Alan – and Phil – cried and easily forgave Jep instead of shouting and blaming him was that Alan and Phil had been in that same place in the past. When Alan was seventeen, his life took a wrong course, and through many bad choices he nearly lost his family and even his own life. Phil and Miss Kay forgave Alan for the harm he’d done to the family, so Alan was more than happy to offer Jep that same forgiveness.

It’s important for everyone to know that the Robertsons are just a normal family with normal flaws and imperfections.

Life is hard, and getting along with others is definitely one of life’s greatest challenges. But Scripture tells us clearly to “live in peace.” Knowing how hard it is to get along with coworkers, many people have asked us how we all work together and still enjoy being with each other. There’s no secret to how this works. It’s all right there in the Bible.

Jesus laid out a way of life for His followers that was “upside down” from the way the rest of the world lived at the time He walked the earth and still is today. Forgiving other people who have wronged us or hurt us or embarrassed us is not easy. In fact, sometimes it seems impossible. But that is what God did for us and what He asks us to do for others.

When we’ve experienced that kind of radical, extreme forgiveness, then forgiving others suddenly makes all the sense in the world.

One day Jesus’s right-hand man, Peter, went to Jesus to have this whole forgiveness thing spelled out for him. Peter said, “Lord, how many times shall I forgive my brother or sister who sins against me? Up to seven times?”

Seven seemed like a generous number to Peter. If somebody does the same thing to you over and over, you might put up with it once or twice, but after seven times surely you get a pass to stop trying.

But Jesus said, “I tell you, not seven times, but seventy-seven times.”

What? Peter’s jaw probably hung open like a dead fish when he heard that. He was likely thinking about the people in his life who were smart enough to know just how far they could take advantage of his good side. If selfish people know they can mess with you seventy-seven times and you’ll forgive them, you would think it would be safe to conclude that they might take advantage of the situation. Right?

But Jesus had more to say on this subject. He said “seventyseven times” as a way of conveying, “Don’t keep score. Just keep forgiving them. A million times if you have to.”

Why did Jesus say this? Why does this crazy course of action make sense? Jesus told a parable to explain why. It’s called the Parable of the Unmerciful Servant.

A Tale of Two Debts

“Therefore, the kingdom of heaven is like a king who wanted to settle accounts with his servants. As he began the settlement, a man who owed him ten thousand bags of gold was brought to him. Since he was not able to pay, the master ordered that he and his wife and his children and all that he had be sold to repay the debt.

“At this the servant fell on his knees before him. ‘Be patient with me,’ he begged, ‘and I will pay back everything.’ The servant’s master took pity on him, canceled the debt and let him go.

“But when that servant went out, he found one of his fellow servants who owed him a hundred silver coins. He grabbed him and began to choke him. ‘Pay back what you owe me!’ he demanded.

“His fellow servant fell to his knees and begged him, ‘Be patient with me, and I will pay it back.’

“But he refused. Instead, he went off and had the man thrown into prison until he could pay the debt. When the other servants saw what had happened, they were outraged and went and told their master everything that had happened.

“Then the master called the servant in. ‘You wicked servant,’ he said, ‘I canceled all that debt of yours because you begged me to. Shouldn’t you have had mercy on your fellow servant just as I had on you?’ In anger his master handed him over to the jailers to be tortured, until he should pay back all he owed.

“This is how my heavenly Father will treat each of you unless you forgive your brother or sister from your heart.” (Matthew 18:23-35)

We start with a king, the sort of king who was common in Jesus’s day. One of the king’s servants owed him ten thousand “bags of gold.” In the original language Jesus gave a precise weight of each “bag of gold,” enough to pay a worker minimum wage for twenty years. Each bag. Ten thousand bags would add up to well over four billion dollars today, owed by a guy making less than a hundred dollars a day. It would take him two hundred thousand years to pay the debt even if he didn’t use any of his wages to feed himself or his family.

Because the servant couldn’t pay, the king ordered a punishment common in the first century AD: selling the man’s wife and children. A Jewish king would never have done that, but the Jewish people were under the thumb of Gentile kings at that time. So the king in Jesus’s story wasn’t even a God-fearing man.

The desperate servant hoped his king believed in fairness, though. He begged for fairness with a tiny drop of mercy:

“Be patient with me, and I will pay back everything.” Sure you will.

The king wasn’t stupid. He knew he wouldn’t get his money even if he waited two hundred thousand years. Fairness, by his standards, would have been to sell the man’s family.

But selling them wouldn’t bring him anything remotely close to four billion dollars. It wasn’t worth the trouble. So instead, he took pity on the servant. He canceled the debt. He not only didn’t give the man what he deserved for failing to pay a debt, he gave him what he didn’t deserve.

You might think the experience of having a four-billiondollar debt canceled would put a smile on this man’s face, a spring in his step, and gratitude in his heart. Wrong. He walked out of the king’s room and came face-to-face with another servant who owed him a hundred silver coins — about four thousand dollars. Enough money to feel the loss if he didn’t get it back, but compared to four billion, it was nothing.

Did he smile at this man who owed him? No, he grabbed him and choked him! Even the pagan king didn’t do that. And when this fellow servant said exactly what the forgiven servant had said, begging for patience and promising to pay, the forgiven guy refused. He had the man thrown into debtor’s prison — where he couldn’t work, so he’d never be able to earn the money to pay the debt. This wasn’t a strategy for getting the four thousand. It was just revenge — a common punishment for debt in the first century.

When word of this got back to the king, he wasn’t happy, and he asked the obvious question: “Shouldn’t you have had mercy on your fellow servant just as I had on you?”

The answer was obvious.

In Faith Commander, Korie says, “In the Robertson family, forgiving is a choice we make, a radical choice. We want and need God’s forgiveness every day, so we must be radical in the way we forgive others who wrong us as quickly as we can. Radical forgiveness means to forgive in such a way that others might not understand it.” That’s a high standard! Is radical forgiveness a choice your family has made as well? Have you made that choice? ~ Devotionals Daily

There is so much extra content from Faith Commander that we couldn’t publish it all here in this blog! Input your email below and you’ll have access to our FREE PDF download of the sample chapters for each of the book’s editions.

Register NOW for the FaithGateway author chat on May 22 at 2:00 pm EST/ 11:00 am PST with Duck Dynasty’s Korie Robertson and Chrys Howard! Tweet your questions to @FaithGateway using #FaithCommander! 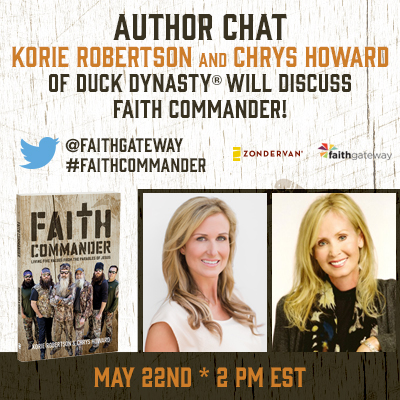