What Did Jesus Write on the Ground? 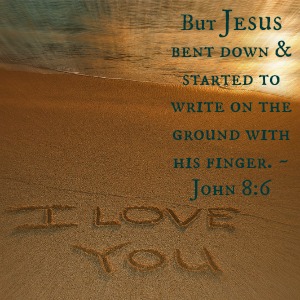 [The teachers of the law and the Pharisees] were using this question as a trap, in order to have a basis for accusing [Jesus]. But Jesus bent down and started to write on the ground with His finger. When they kept on questioning Him, He straightened up and said to them, “If any one of you is without sin, let him be the first to throw a stone at her.” Again He stooped down and wrote on the ground. — John 8:6–8

It’s fun to write messages in the sand; it can also be cathartic. Some people take photos of their messages to send to friends; others may stand and watch as the waves take the message away, as though it never existed.

A woman had been caught in adultery, and she was brought to Jesus. There was a group assembled, so the Pharisees “reminded” Jesus that, according to Moses’ law, she should be stoned, but they wanted to know what He had to say. Not once, but twice, Jesus stooped and wrote on the ground with His finger, and there is mysterious significance as to why John included this detail in the passage. Now, we shouldn’t miss what Jesus said in between His stooping — which is fairly critical to the story — but what was He writing?

Some believe that He was writing the Pharisees names and possibly their sins. This theory is based primarily on Jeremiah 17:13: “Those who depart from Me shall be written in the earth, because they have forsaken the Lord, the fountain of living waters.” In the preceding chapter from John, Jesus spoke of Himself as living water. So perhaps He was fulfilling a prophecy. Others believe it was to demonstrate, as God the Father did when He carved the Ten Commandments with His finger, that Jesus had the authority to issue two new commandments: for us to love one another, as He loved us (John 13:34), and to bear one another’s burdens, as indicated by Paul in Galatians 6:2.

We don’t know for sure what Jesus was writing, nor do we know who saw His message. It’s possible, however, that once the crowd had dispersed and He was left to deal with the woman Himself, He’d written only one other word:

And whether that message was erased by Him or the wind, her sins were forgiven.

Lord Jesus, by Your blood and resurrection, You provided a way for my sins to be erased. Though others may try to condemn me, You do not. I need only come to You for this gift. There is nothing more I can do for salvation.

Have you ever wondered what did Jesus write on the ground? Imagine being one of those holding a stone ready to condemn the guilty. What could they have been thinking? Now, imagine yourself as the accused woman facing condemnation and anticipating being stoned to death. What must that have been like to be saved from a brutal death and forgiven so dramatically? Please leave a comment on our blog. We would love to hear from you! ~ Devotionals Daily