The Purpose of Marriage – Watch the Video

God put Adam in the garden to “work it and take care of it.” That was a part of human’s job description. The not-alone God says,

“Let us make mankind in Our image, in Our likeness, so that they may rule…”

Then God says, “Be fruitful and increase in number; fill the earth and subdue it. Rule over the fish in the sea and the birds in the sky and over every living creature that moves on the ground.”

Human was created to rule over the earth and subdue it. So let’s take a minute to hash this out.

The Hebrew word translated “rule” means to actively partner with God in taking the world somewhere. And the word subdue doesn’t mean to exploit or harm the earth. It means to harness the raw materials that make up the planet, all that pent-up potentiality, and make something beautiful.

We were created to work. But not just any kind of work. To work for human flourishing. To partner with God to make a garden-like world in which humans can thrive and God can walk with his people in the cool of the day. What the Hebrews called shalom. Contrary to the mantra of the day, we do not work to live. In God’s economy, we live to work.

We need to recapture a theology of vocation. The word vocation comes from a Latin word meaning “calling.” I believe there is a calling on every person’s life to partner with God in their corner of the garden and to work for human flourishing.

I believe God calls pastors like myself, and God calls architects and artists and accountants and stay-at-home moms and baristas and mortgage brokers — and on down the list. We need the full spectrum of vocations for Eden — not just “spiritual” vocations (whatever that means), but every human on the planet doing what God made them to do.

The first thing God does with Adam is put him in the garden to “work it and take care of it.”

Everybody needs a gardening project. 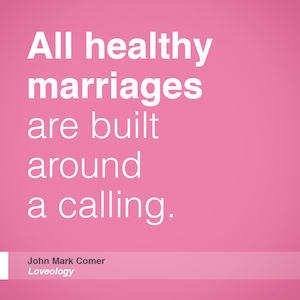 What’s your calling? What’s your gardening project? You need to be able to answer that question, or in time the wheels will fall off in your marriage. Why? Because all healthy marriages are built around a calling. Marriage is a means to an end. It exists for friendship, yes, but also to partner with God for the remaking of shalom.

Couples who exist simply for one another are doomed to failure.

If the end goal of your relationship is your relationship, it will self-destruct. You can only sit at a coffee shop and stare into each other’s eyes for so long. At some point you have to get up and do something. That’s why — in an ideal world — you should have a sense of your calling before you get married. And the marriage should be built around that calling.

Now, I know this raises as many questions as it does answers.

These are all great questions, but they are beyond the scope of this book. For now, here’s what I’m trying to say.

Marriage is a means to an end. It exists for something larger than itself.

That’s what we see in the beginning.

Adam was called by God to take care of Eden. But it was too much work for one man. Eden was massive. Adam was incapable of gardening the whole thing. He needed help.

That’s why God created Eve. God says, “I will make him a helper suitable for him.”

The word helper is ezer in Hebrew. It sounds derogatory in English, like God made Adam a personal assistant. But it’s not that way at all in the original language. Ezer can be translated “partner” — one who comes alongside to help achieve a goal.

The exact same word is used for God in Psalms. The psalmist sings, “The Lord is with me; He is my helper.” In other places it’s used of military reinforcements without which an army would be crushed.

A helper is not an employee — someone who works for you, someone you boss around.

A helper is an equal. Genesis uses the adjective suitable, meaning “on the same level.” It’s someone you love and respect. And it’s one who comes alongside as a partner in a project, as an ally in a war. We all need that kind of helper. Or put another way, we all need help.

Men, don’t marry a woman who doesn’t want to be your ezer, your partner in life.

If you ignore this and get into a marriage with no sense of calling, it’s only a matter of time until you start thinking, “What now? What’s next?” It’s implanted into your humanness.

God created marriage for you to do something. To put on your gloves, pick up your shovels, and, hand in hand, go make a world.

If you are married, do you know what your calling is as a couple? Are you fulfilling your calling together? Come join the conversation on our blog! We would love to hear about how your marriage is being used by God to further His Kingdom! ~ Devotionals Daily