Where Is Jesus? The Foot of the Empty Cross 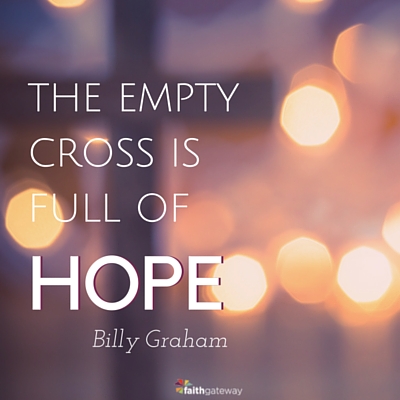 Nor is there salvation in any other, for there is no other name under heaven given among men by which we must be saved. — Acts 4:12

What is the ultimate victory of the cross? That it could not hold the Savior of the world, who triumphed over sin and death, winning salvation for mankind. The resurrection story of Jesus Christ is what gives meaning and power to the cross. What a failure Christianity would be if it could not carry our hopes beyond the coldness and depths of the grave. You see, the resurrection means the salvation of our souls.

What does the resurrection mean to you? Many have never thought about it. Some believe that Jesus died leaving a legacy of “Do good to your neighbor,” never believing that He was raised from the dead. Others think the resurrection was a hoax. There are those who question whether Jesus even existed.

True believers in Jesus Christ have no doubt that He lived among us, died for our sins, and after three days was resurrected to life, conquering the sting of death, offering the human race the greatest gift—His sacrificial love.

Several years ago an entertainment network carried a story on the Billy Graham Library, highlighting it as a point of interest in the city of Charlotte, North Carolina. The show’s cohost, Kristy Villa, arrived on the property along with her crew and was met by a colleague who explained what visitors might experience while there. She drew the journalist’s attention to the many crosses displayed, including the forty-foot glass cross through which visitors enter the building.

Halfway through the presentation Villa said with a sense of awe, “I see all the crosses, but where is Jesus?” The colleague smiled and said, “He’s in Heaven, and He is also present in the lives of those who believe in Him and follow Him as their personal Lord and Savior.”

The journalist threw her hands around her face and exclaimed, “Oh, that’s right! Some worship a crucifix, but Christians worship a risen Christ.” After a moment Villa said, “I have been in church my whole life, but I have never heard the emphasis put on an empty cross.”

She may not have realized it, but she had just proclaimed the heart of the Gospel, as I have done for more than seventy years, and later told her viewers, “This destination [the Library] is a place you must come and see!”When I heard this marvelous report, it made my heart leap, and I thought about the words of the psalmist: “Come and see what God has done . . . for mankind!” (Psalm 66:5 NIV).

The question we must all answer is, “What does Jesus’ work on the cross and His resurrection mean to us, and what does it mean to be saved?”

Many people, including some who claim to be Christians, do not fully grasp the impact that the crucified and risen Christ makes upon the human heart. How do I know this? Because there is no change in them. Have you asked yourself, “What do I believe about the empty cross and the empty tomb?”

The foot of the empty cross is the ultimate destination in life. Your acceptance of Jesus’ sacrifice, or your rejection of it, determines your future life. If you do not believe that Jesus died for you, then you will remain the same, being gripped by sin and dying by its penalty, with certainty of eternal judgment in Hell and banishment from God. But if you believe that Jesus rose from the grave, achieving victory over the cross of death, and you accept that He paid your penalty, you will never be the same.

The Empty Cross Is Full of Hope

The cross represents doom for sin and hope for sinners. It condemns sin and cleanses souls. The cross is where Jesus was crucified in our place and where Christ brings resurrection life to mankind. The bloodstained cross is gruesome to some, but the empty cross is full of hope.

Satan, overly eager to thwart God’s purposes, overstepped his bounds, and God turned what seemed to be life’s greatest tragedy into history’s greatest triumph. The death of Christ, perpetrated by evil men, was thought by them to be the end, but His grave became but a doorway to a larger victory.

The resurrection empowers faith in Jesus Christ. If I did not believe that Christ overcame death on the cross and bodily rose from the grave, I would have quit preaching years ago. I am absolutely convinced that Jesus is living at this moment at the right hand of God the Father and reigns in my heart. I believe it by faith, and I believe it by evidence found in the Scriptures.

Luke, a physician and disciple of Jesus, was one of the most brilliant men of his day; he made this startling statement about the resurrection in the book of Acts: “He . . . presented Himself alive after His suffering by many infallible proofs, being seen by them during forty days and speaking of the things pertaining to the kingdom of God” (Acts 1:3).

These “infallible proofs” have been debated for two thousand years. Many people have come to know the truth while they tried to prove Jesus’ resurrection a lie and failed. Others ignore the facts recorded in the best-selling book of all time, the Bible.

Watch the Video: The Reason for My Hope

Excerpted with permission from The Reason for My Hope by Billy Graham, copyright Billy Graham.

Share some new statements about the confidences you have in the resurrection of Christ with us on our blog! We want to hear from you! ~ Devotionals Daily