Why Shouldn't I Just Quit? 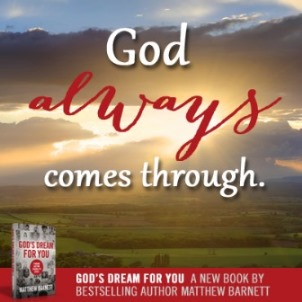 For His compassions never fail. They are new every morning; great is Your faithfulness. — Lamentations 3:22-23

There’s a little Dairy Queen somewhere east of LA on the 10 freeway.

The 10 is the big east-west artery between inner city Los Angeles, where I had been breaking my heart trying to birth a ministry, and my home in Phoenix, Arizona. It’s a no-nonsense, mostly straight shot through the desert that takes six to seven hours to drive. But off some forgettable exit about an hour east of LA, there’s that Dairy Queen.

One night early on in that first year of ministry, I locked up my office, threw everything in my car, tried to swallow the big lump in my throat, and started driving. Hollywood Freeway east, 110 south, and then merge onto Interstate 10, into the setting sun. That was the road that would take me home, away from my failure, away from all the inner city brokenness and insanity.

Dad’d be disappointed, but knowing him, he’d probably blame himself. He’d maybe let me join the church staff. I could help with the youth or some outreach program. Something would work out. Somehow.

When I got to the Dairy Queen, I pulled off the road. I knew there was something I needed to take care of first before I went any farther.

Sitting in my car, in that Dairy Queen parking lot at twilight, I tried to explain it to the Lord. I knew I had failed Him, failed my dad, failed the desperately needy people in LA’s inner city, and failed myself. God had given me a vision, and I was dropping it like a hot potato. I knew I was going home defeated and discouraged, giving up on what surely seemed to me like a lost cause. But I still needed to talk to God about it.

And He said, “Just give Me one more day.”

“Lord, there’s no way I can pastor this church. And I can’t picture anything changing in the future.”

Neither of us said anything for a while. And then I said, “Okay, just one more day. That’s all I can promise You.”

I got my cheeseburger and a Blizzard and drove back to LA.

In the days to come, I made several more such trips, car loaded, tears in my eyes, heading for Phoenix. But each time I pulled off at the Dairy Queen to explain to Jesus why I was leaving LA.

And each time He asked me for just one more day. Why was I so discouraged?

I was twenty years old, this was my first church, and we only had eighteen people. Actually, we started with eighteen people. After I’d been pastoring for a few weeks, we were down to two — and they didn’t look too steady.

The kicker came on a Sunday night when I sat looking out the window of that little church, waiting to see some headlights as cars pulled into the parking lot. And none came. At seven, I turned off all the lights. Instead of going home, however, I went out and just started knocking on doors in the community, talking about Jesus to anyone who would listen.

Later, as I looked at that darkened church, I felt like the biggest failure in the world. That was the first time I packed my car and headed east on Interstate 10, and that was the first time the Lord met me at the Dairy Queen. I knew I’d hit bottom in my ministry, but if the Lord wanted me to give it another twenty-four hours, I could at least do that much.

In the face of certain battles, all you can say is,

Scripture says that His mercies are new every morning and that His faithfulness is great (Lamentations 3:23). Who knows what those mercies will be? They might come in a trickle — or they might pour in like a flood.

Remember the prophet Elijah? He ran like a jackrabbit from his enemies and then collapsed exhausted under a desert broom tree. “I’ve had enough,” he told the Lord. “Take away my life. I’ve got to die sometime, and it might as well be now” (1 Kings 19:4).

After Elijah napped a bit, however, an angel woke up the discouraged prophet, fed him a hot meal, and let him sleep some more. Then the angel woke him up again, gave him another meal, and said, “Okay, time to get back on the road.” And, in the strength of that heavenly meal, Elijah went on a long, long way.

Just because you run out of strength and hope and the will to go on today doesn’t mean the Lord won’t give you all you need tomorrow.

One of the things we ask our people in rehab to do is to give their testimonies on stage in front of all the others. Sometimes they may only be three or four weeks into the program. Some people have criticized us for that, saying, “You should wait until they’re proven followers before they give their testimonies. You should wait until they have a track record.”

But here’s how we see it:

Somebody who has been in the rehab program for three or four weeks is already a work of grace.

Their stories encourage everyone, and I can’t tell you how many people in our program have changed their minds about giving up or quitting after hearing one of their fellow students talk about staying clean and sober, about how the Lord has worked in their lives. But the listeners aren’t the only ones who benefit.

Sometimes the people I ask to share have been a hair’s breadth away from quitting themselves. But when they get up and talk about what the Lord has been doing in their lives during the preceding few weeks, they’re reminded of how far they have already come. And when they hear everybody clapping and cheering for them, shouting words of encouragement or wiping away tears of joy, they say to themselves,

What was I thinking of? I can’t quit now!

Once you face several quitting points in your life and overcome them, God begins to give you a vision of the finish line. I know that because I went eyeball-to-eyeball with Him in enough of those Dairy Queen moments to have settled the issue in my heart once and for all. I know very well that I will have good times, I will have dark times, and I will have a few very dark times. But it doesn’t matter because I have already committed myself to reaching the finish line.

Take that step, and you’ll be one step closer to fulfilling God’s dream for your life.

Did you see Pastor Matthew Barnett on The Today Show?

Are you at the point of quitting? On your unsaved family member, your marriage, your child, your job, your friend? Just give Him one more day! Please join the conversation on our blog. We would love to hear from you! ~ Devotionals Daily