Away in a manger, no crib for a bed,
The little Lord Jesus lay down His sweet head.
The stars in the bright sky looked down where He lay,
The little lord Jesus asleep on the hay.

In 1982 I moved to Greece to work on the cruise ship Stella Solaris. The second week on board, the ship docked in Haifa, a city in northwest Israel overlooking a bay on the Mediterranean Sea. Smart air-conditioned buses idled on the platform outside the security gates, waiting for passengers eager to tour the holy lands. Bethlehem. Jerusalem. Nazareth. Towns where Jesus had walked and lived.

Since the cruise line expected me to experience all the shore excursions, I signed up for the Bethlehem tour. My heart was pounding every second of the two-hour ride through the desert. I couldn’t wait to stand on the land where Jesus was born. I couldn’t wait to see the manger.

When we arrived in Bethlehem, our bus edged its way through narrow lanes crowded with wall-to-wall stalls selling Jesus souvenirs. We almost clipped a table with a menagerie of plastic angels standing at attention under a neon sign that flashed “$1.” I shook my head. It had never occurred to me that Bethlehem would succumb to trashy trinkets like Niagara Falls had. Once our bus was past tourist alley, we inched up a steep hill to Manger Square.

Except there was no manger. And no inn. Forty-foot stone walls, a mosque, and rows of tour buses, but no manger.

As soon as we disembarked, we were ushered toward the Church of the Nativity, an enormous limestone structure that resembled a fortress. Over the years it had survived invasions, fires, and earthquakes. It had been rebuilt and refurbished so many times it appeared to be a church built on top of an old church, on top of an even older one. Our group lined up outside the main entrance in front of a stone archway called the Door of Humility.

It was a tiny rectangular doorway built to prevent horsemen and marauders from entering and looting. Since the first church had been built in 326, people had been ripping off artifacts and chunks of the wall, hoping for a piece of Jesus. The four-foot-high rabbit hole entrance was so small even I had to crouch down to pass through.

The church was cool and dark inside, its lofty walls blanketed with ancient oil paintings. I looked around; still no manger. Instead there was the Grotto of the Nativity beneath the Basilica that enshrined the spot where Jesus was born. In the basement. As I descended the spiral steps that led to the holy cavern, I could feel my face flush. I felt ridiculous. How could I ever think the manger would still exist after almost two thousand years? I was thirty years old, and my desire to see the manger as I pictured it from childhood was just plain silly.

I stood in front of the marble floor and stared at a fourteen-pointed silver star surrounding a single flame that marked the spot where Jesus was born. The Latin inscription engraved in the star read: Hicde Virgine Maria Jesus Christus Natus Est, “Here of the Virgin Mary Jesus Christ was born.” I closed my eyes and bowed my head. I wanted to say something meaningful. A prayer. Something holy. But more than that, I wanted something to happen. Maybe have a vision. Baby Jesus wrapped in a halo would do it. Or lightning bolts, with angels singing, “Gloria in excelsis Deo.” But nothing happened. Here I was standing on the very spot where Jesus was born, and I couldn’t think of a thing to say.

I returned to the air-conditioned bus feeling disappointed with the tour. The marble floor and the silver star in the grotto felt fake and overdone when what I hoped to find were remnants of the manger of my childhood.

As the bus descended the hill away from Manger Square, I lay my head back and remembered Christmas on East 26th Street. I was twelve years old. I could picture the straw roof and miniature rustic timbers that made up the walls of the little manger Mom proudly displayed each year. I recalled baby Jesus swaddled in a tiny cloth lying in a mound of hay and how my sisters and I played house with Him and how we lost Him that year and Mom yelled, “There’ll be no Christmas without Jesus!” And I remembered how we had Christmas even though we hadn’t found Jesus yet. Dad decorated the tree. Mom set out platters with sweet baby shrimps and cubes of ham poked with pretzel sticks.

We wore matching flannel pajamas and ate dozens of sugary cookies shaped like Christmas trees and laughed at how the green sprinkles dyed our tongues as dark as the Scotch pine lit up in front of us. But what I remembered most was Mom and Dad sitting side by side on the couch, holding hands. We had turned the lamps off so the tree lights would shine like stars in our darkened living room as we danced to the Osmond Brothers’ new Christmas album. When “Silent Night” came on, I stopped dancing and looked at my parents. Mom had her head resting on Dad’s shoulder, and her eyes looked all dreamy. Dad was singing, “Si-i-lent night, h-o-oly night…” and I remember feeling like I was going to cry, and I wasn’t sure if it was because I was so happy or if it was because I was so afraid that moment would end.

The angel said to them, “Do not be afraid. I bring you good news that will cause great joy.” – Luke 2:10

Excerpted with permission from Dear Deb: A Woman With Cancer, A Friend With Secrets, And The Letters That Became Their Miracle by Margaret Terry, copyright Thomas Nelson, 2012.

What special Christmas memory will you share with us? Come leave your comments on our blog! And MERRY CHRISTMAS from the Women of FaithGateway! 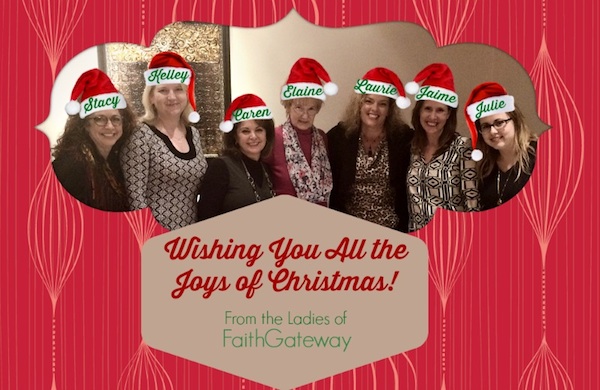