Embracing the Riches of Darkness For a few years during my childhood, I lived on a small horse farm in upstate New York. On summer nights, my friend Kate and I would sneak out of the house and tiptoe barefoot through the dewy grass to the hill just in front of the big red barn. This was our spot. The place where we would lie under the stars without the intrusion of manmade light. In our childhood innocence we believed we had found a secret spot where the stars shone brighter than anywhere else. A secret between us and the sky, where the stars told us truths they didn’t share with anyone else.

As a grown woman, I now know it was the lack of city lights that made the stars so much more brilliant, but the magic of those moments hasn’t left me. In fact, I still feel the same two powerful sensations when I lie in the grass to gaze at the night sky as I did on those warm nights in front of the barn. The first is a sense of connection to creation, a universal experience of the holy that I still have trouble putting into words; the second is a feeling of insignificance. Under the vastness of the evening sky, I am overwhelmed by the smallness of my experiences compared to the galaxies beyond what my eyes can see. I am reminded that my world is infinitely bigger than the four walls of my house, and that I am not the center of any universe.

Often we lose such a perspective, content to sit under our plastered ceilings, mindlessly slipping into a narrow belief that what happens within the walls we call home is, in fact, the universe itself. This kind of thinking makes our world smaller and smaller.

Crowded. Suffocating. Eventually we become trapped by our own puny logic, satisfied to limit our lives to the things we can understand with our cerebral cortex.

We forget how to be awed.

I believe that many of the most life-giving moments take place in the moonlight.

My very first kiss happened under a sky full of stars in the driveway of my house. Nearly every one of the best celebrations that I have been a part of culminated in dancing long into the night. All three of my babies were born under a night sky. I fell in love with my husband Joe over long talks lit by the moon. And yet so many of my beliefs about darkness reverberate with negative associations.

As a kid — and, let’s be honest, even sometimes as an adult — I felt the need to have a light on as I slept so as to avoid waking up to pitch black. Now, when my emotions feel dark, I run as fast as I can to my therapist or my mom, looking for perspective to talk myself out of the gloom. Late one night when a work meeting downtown lasted well past dusk, I walked to the parking garage with keys in my hand, just in case I needed to defend myself.

In spite of all the wonders that I have experienced in the dark, in many cases it still feels dangerous. But I am made to live by both moonlight and sunlight. I am designed to live fully in all gradations of illumination without fear, knowing that the nighttime half can be just as compelling as the daytime.

The necessity of darkness in our lives is literally a matter of biology.

Darkness is as essential to our physical well-being as light. I have a friend who endured extensive military training for potential torture scenarios in case he was captured in a hostile situation. For the first part of the training, over the span of a single weekend, he was put in a pitch-dark cell by himself. He recalls losing all sense of time and wondering if he would ever see the light again. During the second part of the weekend, he was forced to sit under artificial light for an extended period of time. He said the light caused even more stress and confusion than the darkness. He no longer had any external cues to maintain his body’s natural rhythm.

Just as solitary confinement in the dark is used as a form of torture, so is exposure to unending light. Human beings exposed only to light will experience extreme emotional duress. Darkness is a necessary part of emotional and physical health; we cannot function normally without it.

We live in a world that spins intentionally to a rhythm of daylight and moonlight. Instead of trying to outrun darkness or navigate around it, perhaps we need to recognize our dependence upon it — and to name it good.

In the beginning of God’s story in the world, we read a creation poem that illuminates the origins of darkness. We read that the earth is formless and empty, and darkness is over the surface of the deep. God separates the light from the darkness, then creates the sun and moon and declares, “It is good.” This means that “good” is both light and darkness, not either-or.

Once darkness and light are blessed by the Creator, we read,

The first evening was followed by the first morning, and thus a rhythm was given to our twenty-four hours. I like the idea that the first day started at night. In the Hebrew understanding of time, each day begins not with the morning, but with the night. When three stars are visible in the night sky, the next day officially begins. This begs the question:

Does darkness extinguish light, or does light emerge from darkness?

Even the cycle of Earth’s year starts with the winter solstice. In this time of greatest darkness, humanity waits for the birth of a new year and the new life that has been hibernating in the dark of winter, waiting for just the right moment to emerge into the light of spring.

I recently came across a passage in the Bible that I had never read before. In the book of Isaiah, God speaks to a man named Cyrus, promising him that he will lead him to a city that was one of the superpowers of the ancient world, and after the battle for the city, Cyrus will find treasures stored in dark places.

I will give you hidden treasures, riches stored in secret places, so that you may know that I am the Lord, the God of Israel, who summons you by name. — Isaiah 45:3 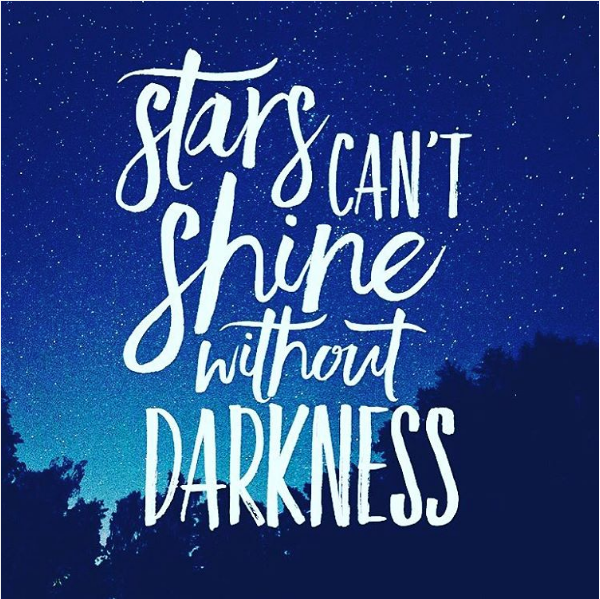 We have become quite adept at blessing the light. But darkness is the microcosm for the other half of our lives, the night half that God called good alongside day.

No matter how black it may seem, darkness is a pathway to the sunrise up ahead. And even when we are staring straight into the inky night, our eyes are watching God.

In the Bible there is a story about a man named Abraham who felt abandoned by God. He and his wife desperately wanted a family, but month after month Sarah wept at the sight of her monthly cycle. Even into their old age, the couple felt the sting of unrequited parenthood. That is, until God whispered to Abraham to go outside and count the stars.

I can imagine Abraham telling Sarah what he heard, a message from God saying that their descendants would be as numerous as the stars. I imagine both of them suppressing nervous laughter because it had to be some sort of cruel joke. After all, Sarah was far past childbearing age, and they were both too old and too experienced to believe in something so extravagant.

I can imagine Sarah lying on her back in the dew of the evening, gazing into the darkness completely starry-eyed. She starts with one and continues to number each star, contemplating the promise that Abraham laughingly whispered to her earlier in the day. Abraham, unable to sleep because he is too worried that once again his wife will wake to disappointment, tiptoes out into the dark to bring her a blanket. Sarah takes the blanket, and her cold hands touch the warmth of her husband’s. He kisses her softly before he heads back into the comfort of the tent. She continues counting if for no other reason than to take her mind off the hoping for something impossible.

But the night sky holds hope for all of us. Including for Sarah, who had at first laughed with incredulity at an unfathomable promise. As her womb swelled with child, the stars became a nightly reminder of the vast things that God can do.

I wonder how often each of us could benefit from a reminder of God’s extravagant promises. From a renewed hope that whispers to us through the vastness of the universe, assuring us that darkness is the fertile ground where life is born, and kisses are shared under glimmering stars.

What would it look like if we began to bless the night?

Maybe we start with something like this poem by William John Fitzgerald:

“BLACK CAN BE BEAUTIFUL”

O God, black can be beautiful!

Let us be aware of black blessings:

Blessed be the black night that nurtures dreams.

Blessed be the black hole out of which creation sprang.

Blessed be the black cave of imagination that births creativity.

Blessed be dark wombs that cradle us.

Blessed be black loam that produces nourishing food for our bodies.

Blessed be black jazz that nourishes our souls.

Blessed be black energy that swirls into gracefulness.

Blessed be black coal that heats us.

Blessed be even our own darkness, our raw, undeveloped cave of shadows.

O God, help us to befriend black and not deny its power.

and to be open to Your life within the dark.

Because a cacophony of stars glimmer with tales of hope born in the darkness.

And it is good.

Excerpted with permission from Starry-Eyed: Seeing Grace In The Unfolding Constellation Of Life And Motherhood by Mandy Arioto, copyright MOPS International, Inc.

When do you experience awe in your present life? How did you feel about darkness and night as a child and teenager? Do you have fear of darkness that has crowded out its hidden treasures? Reflect on and share how darkness nourishes and benefits you. Are you curious and open to discovering what treasures are held inside less-known parts of yourself? In the whole constellation of your life experiences? Come share your answers to one or more of Mandy’s questions on our blog! ~ Laurie McClure, Faith.Full