Editor’s Note: It’s Fiction Friday and that’s got us dreaming about warmer weather and lazy Saturdays. We can’t wait to read a great novel by the lake. Crack open Billy Coffey’s There Will Be Stars and sip a tall sweet iced tea. Try a fiction author who’s new to you. And, if you have no idea where to start, four words: beach chair + Terri Blackstock.

To further spark your anticipation of reading in the hammock, here’s an excerpt from Max Lucado’s novel, Miracle at Higher Grounds Café. Enjoy! 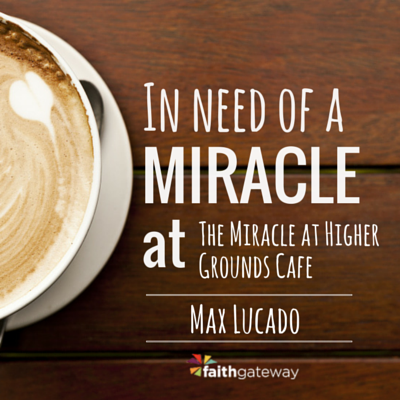 It was a Friday night, and Chelsea was baking. She hummed as she worked. After years of feeling the pressure to keep up with the trophy wives of the ripped and famous, she welcomed the change of pace. Not to mention the boost in confidence. Her run-in with the posse of high schoolers had been redeemed (well, almost) when the prom queen called back to order five dozen of “those delicious cupcakes” for her mom’s birthday tea. It was the perfect opportunity for Chelsea to reintroduce herself to the community. She had dreamed up a grand entrance — a light, lemon cake topped with a swirl of Earl Grey – infused buttercream frosting.

Baking was therapy for Chelsea, and she was ready for a nice, long session. The complexity of her recipes had a funny way of matching the complexity of her problems. The day she learned of Sawyer’s infidelity, she baked a thirteen-layer bittersweet chocolate cake—one for each year they were married. After one bite, she dropped the entire thing in the trash. She remembered the acrid aftertaste like it was yesterday. She did a quick calculation. Eight months and seventeen days ago, exactly.

“Time will heal all wounds,” Chelsea’s mother said. And she would know. Forgive and forget were words Virginia Hancock had lived by, but Chelsea wasn’t so sure. Forgetting was not in her nature. Especially when it came to Sawyer.

Sawyer was drafted into the NFL less than a year after he and Chelsea were married. He spent eight seasons with the Cowboys, during which he played like an all-star and aged like a rock star. Led the league in rushing for three seasons. The Cowboys reached the play-offs twice. Sawyer was a regular ESPN highlight. People were already talking Hall of Fame. But a knee-level tackle in the first game of his ninth season finished that. Torn ACL.

Sawyer had signed a fifteen-million-dollar contract, guaranteed healthy or not. He could have retired. He should have retired. Instead, determined to make a comeback, he rehabbed his leg and earned a spot with the Seattle Seahawks. But he was not the same player. And he knew it.

Many a pro athlete goes through a midlife crisis. For Sawyer, it happened at the ripe old age of thirty-five. After three rough seasons in Seattle, he was third string. He overcompensated for his failures on the field with risky business ventures, extravagant gestures, and late nights on the town. Chelsea tried to shield her kids from their father’s sudden change in behavior, but she couldn’t keep up. Sawyer couldn’t settle down.

By the start of the next season, the Seahawks dropped him. So did his agent. No one was interested in Sawyer anymore. No one except for Cassie Lockhart, a junior agent who was young and hungry and eager to represent an NFL star. She convinced Sawyer to join her for a meeting with the San Diego Chargers. Chelsea guessed she was after the commission. She had no idea the girl was after her husband.

“It was the biggest mistake of my life,” Sawyer pleaded.

“It’s certainly one for the record books,” Chelsea deflected. “Not to mention the tabloids and social media.”

A few months later Chelsea left Seattle. And Sawyer. That’s when Sawyer vowed he would change.

I wonder how that’s going for him.

Chelsea had not spoken to Sawyer since. Her mother’s untimely death provided the perfect opportunity to start over. Or at least escape. She imposed strict communication rules when she moved back to her old hometown.

“Half an hour with the kids each day?” he asked.

“Yes, but they call you,” she negotiated. He agreed to her terms as long as she agreed this was only a “trial separation.” The jury was still out. Chelsea had divorced Sawyer a dozen times in her imagination, but she had two reasons that kept her from going through with it, and they were sleeping upstairs. Hancock and Emily loved their dad in spite of all his flaws.

“Wish I could do the same,” Chelsea said aloud, as she boxed the last of the cupcakes. The first special order of the Higher Grounds Café was complete. She paused to admire her handiwork. Perfect. And they needed to be. Tomorrow she would deliver them to one of San Antonio’s most prestigious neighborhoods. And if she was going to make it on her own, without Sawyer, her new life had to start now.

From Chelsea’s café, Alamo Heights was due north, both on the map and in social standing. Chelsea’s SUV weaved up a hill lined with flawless homes and inviting gardens, typical of the coveted 09 zip code.

“I miss our old house,” Hancock said as they arrived at the delivery address.

Chelsea glanced up at a pristine Tudor home. It held an uncanny resemblance to their house in Seattle. Whoever lived here did not need the ten-dollar gift certificate she planned to deliver with the cupcakes. But after a slow week, Chelsea was feeling the need to re- establish the Higher Grounds Café in the community.

Hancock rattled on. “I miss living by the water. Having my own room. Our backyard. The game room. Dad’s giant TV…”

“Okay, mister!” Chelsea interrupted. “We’ll find a new house before long. Something nice. In the meantime, start thinking of some things you’re grateful for.” She reached her right hand over and knuckle-rubbed her son’s hair. “For example, I’m grateful for some one-on-one time with you.”

She hoped the feeling was mutual. Chelsea had, after all, rescued Hancock from an afternoon of tea parties with his little sister and the babysitter.

Chelsea stacked several boxes of cupcakes into Hancock’s open arms, and together they walked toward the grandiose front door.

Chelsea rang the doorbell and waited, imagining lighthearted table talk and celebratory clinking of champagne glasses within. It was strange to be on the outside, but the soirees and black-tie benefits — those were Sawyer’s thing. He was the life of the party, and she often got lost in the shuffle. But not today. Chelsea relished the simplicity of her assignment. For a brief moment, she even contemplated introducing herself by her maiden name.

She didn’t get to make a decision. The door opened to a slender blond woman who could have stepped off a catalog page showcasing “casual elegance.” She wore a diamond pendant above her asymmetrical black top, a black-and-white viscose skirt that seemed to float about her, and a surprised expression. “Chelsea Chambers?”

Deb threw her arms around Chelsea. “It feels like a million years!” she said. “I haven’t seen you since…”

Chelsea knew exactly when. “The wedding,” she said, almost whispering.

“Right,” Deb said, glancing at Hancock. “And who is this handsome fellow?” “

This is Hancock — my delivery guy,” Chelsea quipped. “I reopened Mom’s café this week, and… I hope I’m not ruining a surprise, but I think your daughter ordered birthday cupcakes.”

“And she’s been raving about them all week. I can’t believe you’re back! Come help me put the cupcakes on a platter, and then I have to introduce you to everyone.” Deb dragged Chelsea and Hancock into the kitchen, and from there to the formal living room. A dozen women, all well-dressed, some cosmetically curved, formed a horseshoe around Chelsea, who wore jeans, a sweatshirt, and tennis shoes. “Everyone, this is my childhood friend, Chelsea Chambers, wife of Sawyer Chambers.” Deb paused for the gasps. “She just moved back to San Antonio to reopen the old Higher Grounds Café in King William. Y’all have to stop by and make her feel welcome!”

Chelsea smiled, grateful for Deb’s thoughtful (and very Texan) introduction. Each woman introduced herself and promised to visit the store. Most importantly, the cupcakes were a big hit. More than one diet was momentarily abandoned.

Chelsea took the long route back, scouting out potential homes along the way. Somewhere, nestled among the pecan trees and terra cotta roofs, was the steeple of Alamo Heights Methodist, the church where she and Sawyer were married. On the surface it was a storybook wedding: The red carpet and white pews. Flowers every-where. Each member of the Longhorn backfield dressed in a tux. Her sister and two best friends as bridesmaids. Her mother in the front row. But the bride walked down the aisle alone, carrying white roses and a child in her womb.

“So does this mean we’re staying in San Antonio for good?” Hancock asked as Chelsea stopped to pluck a real estate brochure from beneath the For Sale sign of a picture-perfect home.

“Would that be so bad?” Chelsea asked.

As Chelsea passed from one zip code to the next, she noticed that yet another Café Cosmos had sprouted. A Now Hiring banner hung beneath the slick sign, but business was already booming. Luxury cars wrapped around the drive-through lane. Patrons spilled onto the patio, where the sunshine had convinced everyone it was spring.

When Chelsea got back to the café, she was pleased to see a customer. But he hadn’t come for the coffee.

“Can you sign for the Higher Grounds Café?” the uniformed postal carrier asked.

“I am the owner,” Chelsea offered with confidence. Her burst of esteem was but a vapor.

The letter was from the IRS.

Watch the Video for Miracle at the Higher Grounds Cafe

At some point in all of our lives bad things happen. The roof caves in. Finances crash. Friendships explode. People bail out when you need them the most. And we’re in need of a miracle! Do you have an “I needed a miracle and God provided” story to share with us? We’d love to hear from you on our blog! ~ Laurie McClure, Faith.Full