Editor’s Note: Steve Robinson, former chief marketing officer at Chick-fil-A for 34 years, is the author of the new book Covert Cows and Chick-fil-A: How Faith, Cows, and Chicken Built an Iconic Brand. From the creation of the Eat Mor Chikin campaign to the decision to stay closed on Sundays to the creation of the company’s corporate purpose, Robinson provides a front-row seat to the innovative marketing, brand strategies, and programs that created a culture customers describe as “Where good meets gracious.” Enjoy today’s excerpt!

In the early 1980s, [Chick-fil-A founder] Truett Cathy and Jimmy Collins established the executive committee, with Dan Cathy and Bubba Cathy and the top officers from finance, design and construction, real estate/legal, marketing, and operations. At one of our first meetings, Buck McCabe, chief financial officer, distributed the corporate financials. Though we had discussed sales and expense numbers before, this was the first time I had seen the entire report. Buck guided us through the report, explaining key points.

My eyes landed on a line that showed Chick-fil-A’s charitable giving, and it was about 10 percent of the corporate profits. Truett was tithing corporate profits! As sole owner of Chick-fil-A, he might have directed that portion of income to his personal bank account or reinvested it in the company. But he believed Chick-fil-A was God’s company, and Truett saw himself as a steward of the asset more than an owner.

That moment early in my Chick-fil-A career became a huge encouragement to me. I was coming to understand the promises of Malachi 3 around tithes and offerings, and implicitly embedded in that is how we view money and our stewardship responsibility. In this incredible and faith-based promise, God says that if we will follow this principle of tithing, honoring, and worshiping Him, He will bless us. He does not describe what those blessings will be. He does not say we’ll never have problems. He just says, “I will bless you.” He says, “I will protect you from the devourer. I will protect your crops. I will protect your fields.” What does that mean? I took it to mean exactly what it says. He doesn’t promise prosperity, but rather blessing and protection when we are faithful.

Reflecting on the long-term success at Chick-fil-A, let me state with no false humility: we were not that smart. And, quite frankly, other Chick-fil-A executive committee members would also say we weren’t smart enough individually or collectively to explain the success of Chick-fil-A.

We had a founder and CEO whom the world would not consider particularly educated (he never attended college). Truett had a speech impediment when he was younger, but he overcame it so that now, when he spoke, people listened. He was one of the wisest people I have ever met. Truett Cathy applied what he knew to be biblical and Christian principles in his life and in his business. Within months of my joining the company, I had already seen numerous examples. Then I saw that line on the financials, showing that he was applying one of the most challenging principles to his business. During the course of my thirty-four years at Chick-fil-A, I saw a man in a prayerful, humble, obedient, servant relationship with God, and I saw that same man lead a company of men and women to heights the world marveled at. He created a simple product—boneless breast of chicken between two pieces of white bread with two pickles—that the world fell in love with. Watching him interact with thousands of people over the years, I saw him respect the dignity of every person. He tried to see every person as God sees us. This is biblical, ground-level principle one, and business principle one as well. The Bible says that in the beginning we were created in God’s image (Genesis 1:26). We have a soul, a spirit, and a personality. Truett believed that truth and taught it by his example. I suspect as a boy he watched his mother as she ran the family’s boarding house and treated everyone with dignity—not just as a renter, but as someone to serve.

The Bible also says we were created “a little lower than the angels” (Hebrews 2:7 NKJV). We were created to lead and have dominion over creation. God put creation in our hands. That is stewardship. I came to understand that everything we enjoy, everything we touch and have in our hands, including relationships, money, and talent, we have a stewardship accountability for.

I share this from a position of honor, and I marvel at how God favored Truett and Chick-fil-A. When Truett had something important to say, God gave him the words to say it in an impactful and usually simple and clear way. He modeled for all of us how to apply smart business principles, which he did not see in conflict with biblical principles. Neither do I. And when we applied them, things worked, and in many cases they worked exceptionally well.

Truett created a business that reflected who he was as he tried to live out what the apostle Paul challenged us to do—live in the image of Christ.

How can you better reflect Christ in your work and daily life? How has tithing blessed your life? We’d love to hear your thoughts in the comments! 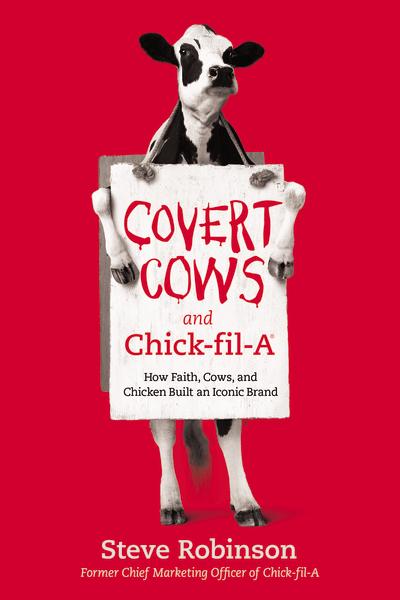