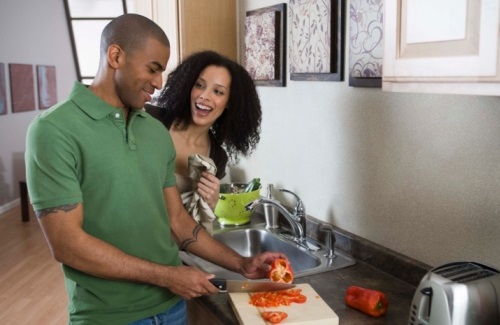 And the wife must respect her husband. — Ephesians 5:33 (NIV)

Sharon was at a small gathering of women the other night when the hostess’s husband popped his head in to say hello and to ask if there was anything they needed. They thanked him for his inquiry, a little conversation developed, and he shared that he’d cooked dinner that night.

“It turned out pretty well, I thought,” he reported. “I had a salad, there was an entrée and pasta, and even a small dessert!”

His wife rolled her eyes and began, “I don’t want you all thinking he’s like this all the time,” she joked. “He’s really not that helpful, and on any given night, I’m the one doing most of the work.”

Her husband had a very subtle reaction—his body stiffened, he smiled through clenched teeth, and his brow furrowed just a bit. He left shortly after that comment.

While the other women were laughing at what his wife probably considered some good-natured teasing, apparently he didn’t agree. Sharon noticed a few of the gals looking at each other with a wide-eyed “Do you believe she just said that?” look on their faces. When she arrived home, she found her husband, Todd, reading in bed. She related to him what had happened and asked him what he thought about it.

“She embarrassed him in front of others,” he replied. “And he had to stand there and take it like a man; otherwise, he’s a wimp. If this were reversed, if he had said all that about her in front of his friends, she’d be having a fit. Men get made fun of by women all the time, and we’re expected to just take it. It bugs us though. He probably won’t be too motivated to make dinner for her again.”

“Wow. I had no idea,” Sharon replied.

“His wife could have taken the opportunity to say something nice about him in front of her friends and make him feel like a million dollars, or she could have done nothing, and that still would have been positive because you gals were impressed already. What she did was take him down a few notches in public. That’s really negative. Why should he serve his wife if all she’s going to do is degrade him for his efforts?” Todd replied.

Bottom Line: Respect your husband, and he will have more of a servant’s heart toward you and your family.

So What About You?

Today your dare is simple. Plan to compliment your husband. Write “CH” (Compliment Husband) on your calendar once or twice a week when you know you will be with other people, even if it is just your family. If you will be around other people today, do this exercise before you go to bed.

Keep it short and simple: “Dave, I really appreciate your caring attitude toward me this week when I’ve been sick. I noticed you have been coming home a little early to help with dinner and the kids. That has really helped me get through the day.” Tell him a strength he has (for example, a caring attitude), and support it with why that matters to you.

Pray that God enables you to recognize different opportunities to praise your husband in front of others once or twice a week, and thank him for the growth you are experiencing spiritually.