Editor’s note: Today’s reading features two selections from Lee Strobel’s devotional The Case for Christ: Daily Moments of Truth which offers fact-based, intelligent devotions to build a foundational faith. Enjoy these two powerful excerpts today on the reliability and impact of the resurrection of Jesus!

It was once fashionable to say that the Gospels — Matthew, Mark, Luke, and John — were written too late to give an accurate account of what really happened in the life of Jesus, including the events surrounding His resurrection. Some even said they weren’t written until the mid to late second century, more than a hundred years after the events surrounding Jesus’ ministry. This discredited the idea that the Gospels were based on eyewitness accounts, and eroded confidence in what they said about Jesus.

However, it is now known that the Gospels were written in the first century — within the life span of Jesus’ followers.1

Also, before the Gospels were recorded, Paul penned his epistles. These letters affirm many details about Jesus’ life, including His resurrection. In addition, Paul’s epistles relay several earlier creeds, attesting to the beliefs of Jesus’ first followers. One of the most interesting is in 1 Corinthians 15:3-7.

Historian Gary Habermas developed a helpful time line related to this creed. It starts with understanding that Jesus was crucified in either AD 30 or 33. Paul wrote 1 Corinthians in AD 54-55, which puts it within approximately twenty-one and twenty-five years of the crucifixion. But Paul said he had previously passed on the creed to the people of Corinth, so the creed itself dates even earlier.

But there’s more. Paul said in 1 Corinthians 15:3: “What I received I passed on to you.” When did he receive this creed? He became a Christian one to three years after Jesus’ execution. He immediately went to Damascus to meet the disciples. He might have received it then, but it was more likely three years later, when he went to Jerusalem and met with Peter and James, both of whom are named in the creed. Paul described this meeting in Galatians 1:18-19, using the Greek term historesai, which suggests it was a personal inquiry or investigation.

Either way, this means Paul was given the creed within one to six years of the crucifixion — and it had already been put into creedal form, which tells us these beliefs went back even further.

“This tradition,” concluded historian James D. G. Dunn, “we can be entirely confident, was formulated as tradition within months of Jesus’ death.”

Months! The news of Jesus’ resurrection was a news flash in the ancient world — and it affirmed that the risen Jesus had appeared to many witnesses.

Many still believe the false rumor that generations had passed before the first Christian accounts were written. Whom should you tell about this exciting early Christian creed?

[After His resurrection, Jesus] appeared to Cephas, and then to the Twelve. After that, He appeared to more than five hundred of the brothers and sisters at the same time… Then He appeared to James, then to all the apostles, and last of all He appeared to me also. —1 Corinthians 15:5-8

The ancient creed that we began to examine in the previous reading explains in verses 5-8 not only that Jesus’ tomb was empty but that the risen Jesus appeared to at least 515 people, including the apostle Paul himself.

In fact, when we look at the broader New Testament, we get more details of how the resurrected Savior appeared to a variety of people in a variety of settings — to men and women, some individually, some in groups, sometimes indoors, sometimes outdoors, to softhearted people like John, and to skeptical people like Thomas. And at times Jesus asked them to touch the scars in His hands or side, or to eat with Him, making it clear that He was present physically and not just spiritually.

These appearances occurred over forty days, and Jesus appeared to the following people:

What’s more, these reports come from multiple sources, from both inside and outside the New Testament. Historian Michael Licona summarized, “In all, we’ve got nine sources that reflect multiple, very early, and eyewitness testimonies to the disciples’ claims that they had seen the risen Jesus. This is something the disciples believed to the core of their being.”

Even the atheist scholar Gerd Lüdemann conceded: “It may be taken as historically certain that Peter and the disciples had experiences after Jesus’ death in which Jesus appeared to them as the risen Christ.”

The resurrection was the central proclamation of the early church from the very beginning. The earliest Christians didn’t just endorse Jesus’ teachings; they were convinced they had seen Him alive after His crucifixion.

The evidence for Jesus’ appearances is strong — and gives us good reasons to be confident about the reality of the resurrection.

Excerpted with permission from the The Case for Christ: Daily Moment of Truth by Lee Strobel, copyright Lee Strobel.

How does having confidence in the resurrection of Jesus empower you in your faith? We’d love to hear your thoughts in the comments! 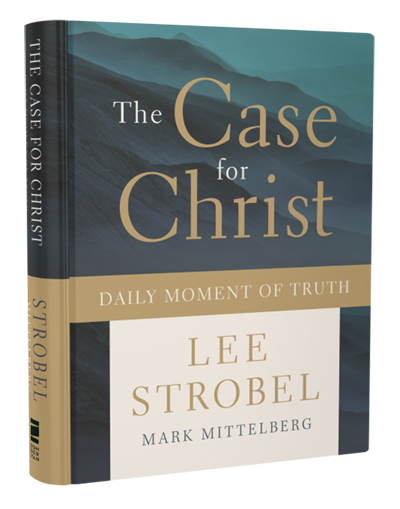